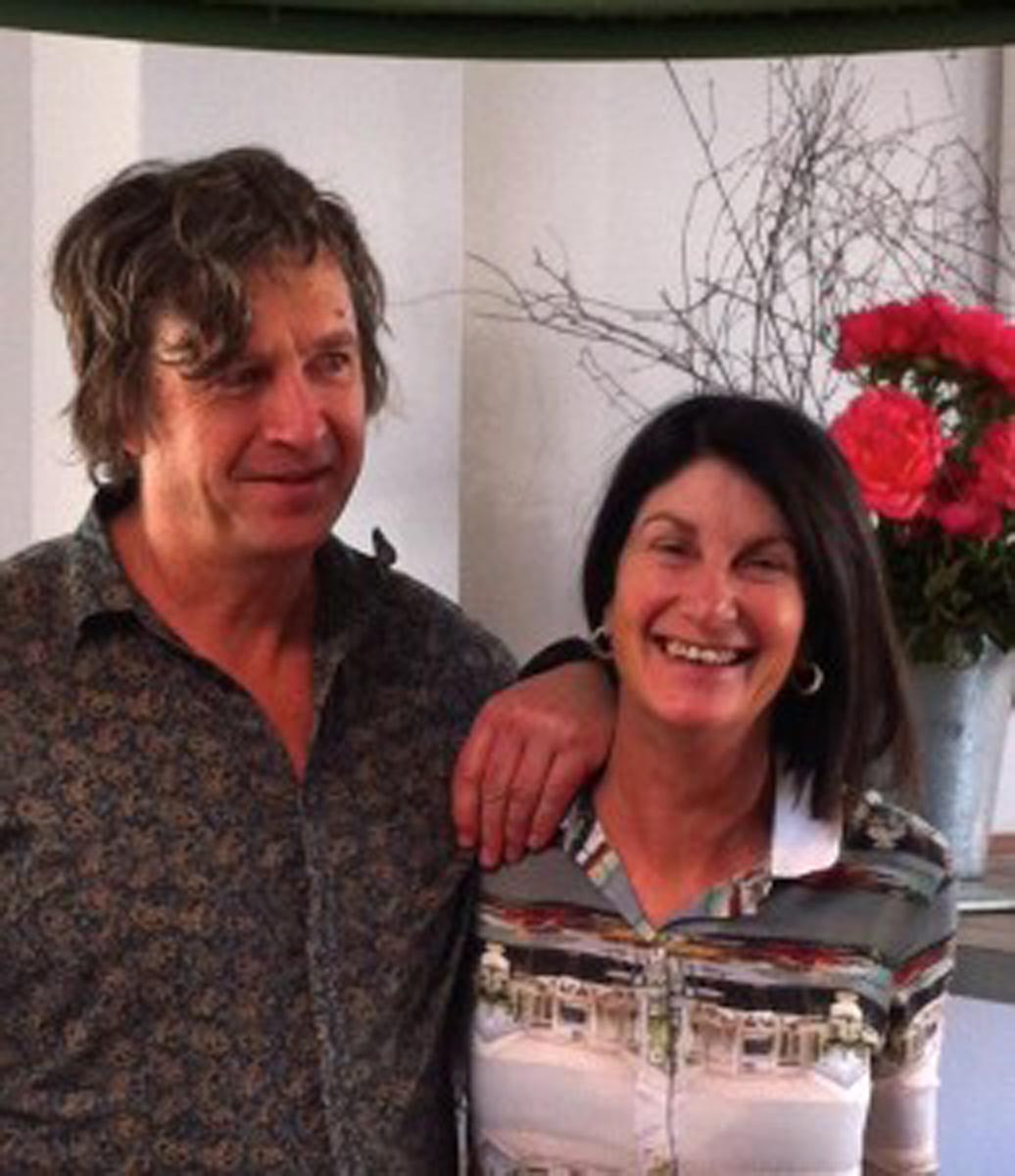 Julie Biuso (JB) “You and Prue ran such a successful restaurant in Auckland (Vinnies) and set such a high standard for others to follow, why did you chuck it in and move to Hawke’s Bay?”

David Griffiths (DG) “After 15 years with Vinnies we got a little tired. We were introduced to the Bay through Craggy Range (winery) and we set up Terroir restaurant for them while still overseeing Vinnies. It was a bit of a commute. When we were offered a job at Wildfire in Sydney, we took it. That was in 2005, and we stayed 2½ years. But after a time, there was nothing that interested Prue, so she came back here and searched the Bay for something. We heard that Black Barn needed a maitre’d so she did that, but we were keen to do our own business again. We met Dan, our partner, who was also looking for a new business, so over a beer, as you do, we said why don’t we pool our resources? It would only be a hundy (100k), maybe, we thought. Yeah, well, that was just the chairs and tables! We’ve always loved this building, and we were fortunate to get it.”

Prue Barton (PR) “When I first walked in, in 2002, I thought this feels metropolitan, like a cool bistro space, and every time I came in I thought it was beautiful. It’s the lightness, or the airiness. It’s not intimidating. There’s a lot of tables, but because you’ve got the light at the end it takes you right through. We did use a designer and architect to get the flow right. 10 years ago it was a clothes shop called Bella Rossa then it changed to Maddisons, They had a small café in the back. It was fortuitous ‘cos Maddisons wanted to move, so it all sort of fell into place. The skylights and the flooring were all done. And the courtyard and the olive tree, too. It was like it was made for us.”

DG “I always wanted a big open kitchen rather than being closed away, so that was part of the plan. We put the bar up front. It’s full on and busy and people love being part of it. We settled on 7 days and 3 nights. 7 nights is pretty hard for the Bays. It’s too depressing to have just 10 people on a Monday night, so we were happy with opening just for 3.”

JB “And the name? Mister D? Is it significant?”

JB “Oh yeah, we’re from the same vintage then …”

DG “We thought it was cool for a brand name. It’s also a nod to my partner Dan, as well, as both our names start with D. We are the two Mister Ds in case you were wondering.”

JB “What’s the rock ‘n roll connection? Do you play in a band?”

JB “Must have been a bloody good business!”

DG “He’s done a wine making course and been accepted into the Master of Wine programme, so he’ll be busy doing that for a few years, but he’s our drummer. Have you had a doughnut yet?”

DG “I came up with the doughnut idea because we wanted to have some fun. One of the things I learnt working with Tonci Farac (Wildfire), is that you have to have fun in your business. I played around for about 3 weeks looking for a different bent, not icing sugar or jam, and I kind of drew from the Stones again. Keith being a long time heroin user, a doughnut with a syringe … we fill the syringe with custard, jelly or chocolate. I got you a doughnut so you can see. You can take it away if you want.”

DG “The idea is that you give it an injection, some people put little dabs here and there and others stick the syringe right in and pump it inside in one go. Some people use all three fillings.”

JB “So you sort of make a hole and squelch it in? Oh I see, you have to let it know you’re the boss. No point being wimpy.”

DG “People come in and just order a doughnut, from 2 year-olds to 92 year-olds. Everyone loves them.”

JB “Nice texture, good, yum, not weighty, really light. Some doughnuts are really heavy or cakey. Delicious, and even though there is a lot of sugar on the outside, the inside is not too sweet. Did you make the crème anglaise?”

DG “We make everything. We have a baker who starts at 6am every day and makes the breads and brioches. We always have pasta dishes on and make our own ravioli. We didn’t want to do fine dining, we wanted it a bit more Italian. Somewhere you could get a good bowl of pasta, simple but good. In Sydney we went to our local Italian at least once a week. We’d drop in on the way to work, have a glass of wine and something to eat. I’ve done mostly classical French in the past, but now I really like Italian.”

JB “What percentage of local ingredients do you use?”

DG “Village Press olive oil is on the tables. Salad greens and herbs are from our local grower. We use Hawke’s Bay seasonal fruits. We started using Te Mata figs for the first time last year. And Hohepa cheese and yoghurt, Origin Earth products and Telegraph Hill olives, several meats and heaps of other stuff from around the Bay. We use it all.”

JB “So you made all those preserves up there?”

DG “Yeah. Around March and April we’ll be busy doing more bottling. For our menu we are always looking for unusual things, but the samphire was random. A guy just turned up with bags of it. I gave him a coffee, and once I pickled it, I gave him a couple of jars. He said it’s really good with smoked fish. I knew it grew here because a Scottish friend had shown it to me. It grows in estuaries. When the sprigs are older they get like a toothpick growing through them. It needs to be young. I pickled it Asian style and I’ll probably use it with a fish dish. One thing I do gather, I’ll show you … fennel pollen. Incredible stuff.”

JB “How long would it take you to get a full jar like that?”

DG “About 5 hours, it gets mixed with salt and lasts us 3-4 weeks. I love it with pork belly. It’s a totally different flavour. And pickled walnuts, we got those ones up there and pickled them. Black hands are a bugger. This is the thing. There are great fisheries, amazing produce and wines  in the Bay, but sometimes it’s what you do to stuff that adds value.”

PB “We were doing lamb croquettes with persimmon chutney. We used to drive past this laden tree and I said I‘m going in there. I can’t stand seeing them just hanging there. And there was this little Chinese man, so I asked him if I could have a box of persimmons, and for him to just tell me how much he wanted for them. He said $20 and I went back the next day to get them and the box was HUGE.”

JB “Were they the astringent variety?”

DG “No, they were hard, but not sour, so I just roasted them with the skin on. I made ginger chutney and served it with lamb and yoghurt. Dad’s from a farming background so we get the whole beast. He does a kill for us, so we get new spring lambs at the end of November. They process about 30 for us and hold them there until we’re ready to take them. It’s amazing, really good shoulders and legs. We save these specials for the weekend. We also do wagyu and venison. We don’t do so much snapper. It’s up there in price. But we do terakihi, blue moki, groper, and blue nose but it has got a bit of a grey vein going through it, a little bit dirty, it lives around the kelp, like a reef fish, catch it in the net not on the line. We don’t to do a lot of whitebait ­– at $120 a kilo, what would we have to charge for that? While we maintain Vinnies’ service and standard of food as fitting for a café / bistro, we can’t charge Auckland prices!” 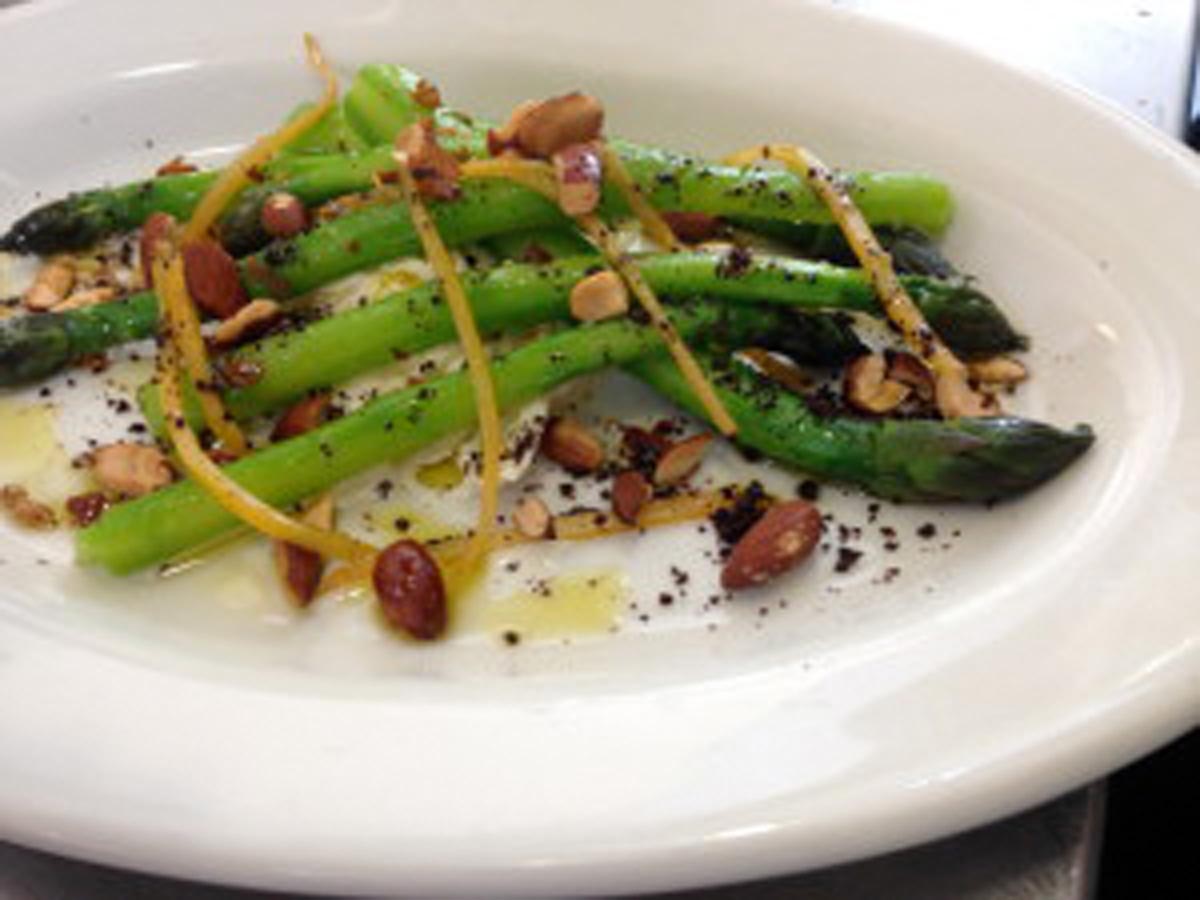 They do give a fig
A really nice couple, these two, and they deserve all the success that can possibly come their way. Ha! Writing that, I know I’m transparent. Yes, I’m hoping they’ll send me a truckload of their gorgeous figs every year come harvest time! Read more