Spring has not sprung until asparagus appears

Asparagus remains one of the true signs of spring and I just love that it won’t do its thing until it is warm enough. It stays tucked under ground until everything is just right, and then BINGO, up it pops, with its neighbours, seemingly overnight. Secretly, I hope that no one discovers an economical way of growing it in a glasshouse or tunnel-house because it does give true meaning to the word seasonality.

When it first appears, I fall over the crowds at the market to get my hands on some, and reckon there’s no better way of serving the first bunch than with a puddle of extra virgin olive oil and a bowl of freshly grated parmesan to dunk it into, or a bowl of just-melted garlic butter. As the season moves on you do need to be more inventive but I get irritated with people who say they are over it, bored with it, while they grab the latest imported produce.

The asparagus plant is an interesting creature, a perennial, and a member of the lily family. It consists of a crown, which sends up shoots each spring. At the end of spring spears are left to grow into ferns, which then undergo photosynthesis. The root system is recharged with carbohydrates and these are stored in fat storage roots. In autumn the plants die off, and they remain dormant in winter, waiting for the ideal conditions of cool nights and mild daytime temperatures to start the process again. There are male and female plants (true!). The male plants produce more spears and live longer, but the female plants, wouldn’t you know it,  produce the fattest juiciest spears.

The asparagus season peaks around late October in the southern hemisphere, so my recommendation is to scoff as much of it as you can while it is good and affordable. That is right now.

Asparagus remains an expensive vegetable to buy because the yield from the plants is small and the spears are time consuming to harvest. It’s also perishable. Buy only what you need and use it the day of purchase if it is possible because the flavor, texture and nutritional qualities quickly deteriorate. Choose asparagus with compact tips and taut spears. Keep asparagus away from fruit and vegetables such as bananas, apples, tomatoes, stone fruit, pears and avocados, or anything, which gives off ethylene gas, as it speeds up deterioration. Asparagus dries out quickly so keep it moist by wrapping the butt ends in a damp cloth, or damp paper towels. It makes a difference. Store asparagus in a cool place, or in the fridge.

Traditionally, asparagus was cooked in a tall pot by standing the spears on the butt end, tips facing up, the butt end immersed in boiling water leaving the tips to cook gently in the steam. But, heaven forbid, this was in the days when asparagus was cooked for 15-20 minutes to khaki greenness and smelled the house out. These days most cooks blanch the asparagus briefly, or cook it for less than 5 minutes, keeping the vegetable firm with a good crunch and vibrant color. However you cook it, choose spears of an even thickness to ensure they cook uniformly.

Is there a good reason to peel asparagus? There’s none that I can think of. It does reveal a paler shade of green, and if that takes your fancy, peel away. Otherwise, just trim the stem ends with a sharp knife or snap them off. Snapping ensures you don’t waste any tender bits – the spears will only break where they are tender. If the ends are shaggy, though, trim them. Wash well, then drop asparagus into a saucepan of boiling, lightly salted water, tips pointing up. Cook with the lid off for 2-5 minutes. Drain and refresh with plenty of cold water. Plunging into boiling water sets the colour of any green vegetable. Cooking with the lid off lets vegetable acids escape in the steam; putting a lid on the pan makes the acids fall back onto the vegetables and causes them to lose their nice bright green colour.

But here’s a thing. I like my asparagus crisp with the tips intact, but when making asparagus risotto the asparagus needs to be the same texture as the risotto to make a cohesive dish – crunchy chunks just will not stick to rice! In this case, cook the asparagus until tender.

You don’t have to cook asparagus though. It is really delicious raw, well, that is, providing it is very fresh. Slice it thinly and add to salads. It adds a nice crunch.

On the vegetable antioxidant chart, asparagus comes in third. There’s plenty of potassium, good amounts of calcium, and magnesium and phosphorus, too. It’s low in salt and has a good amount of fibre. Asparagus has practically no fat, but in my book fat makes asparagus taste better – think butter, cream, cheese and olive oil. Yeah! 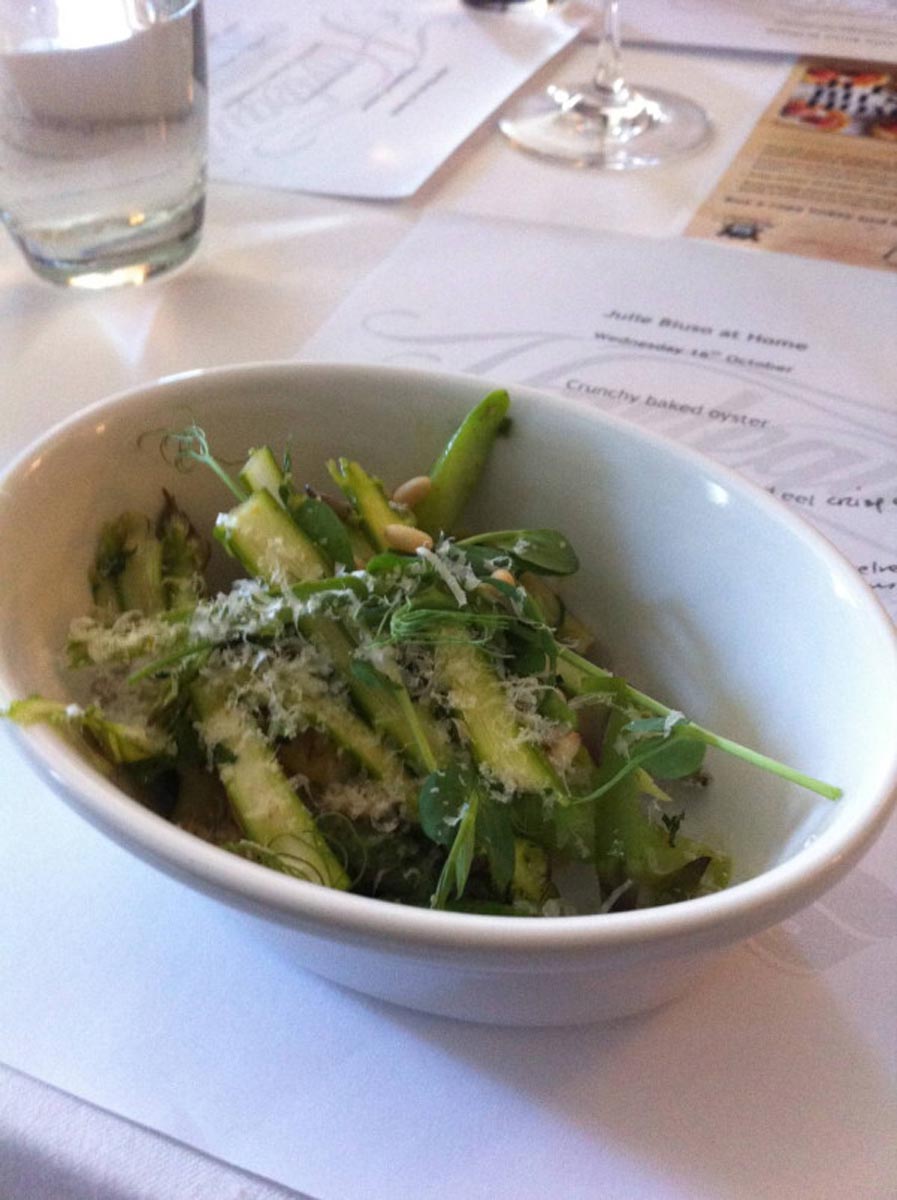 The lovely Jonny Schwass cooked these greens – asparagus, pea shoots, pine nuts and parmesan – for the Christchurch launch of my book Julie Biuso At Home at his restaurant Harlequin Public House. The book is available to order online on the Home page of Shared Kitchen. It is currently a finalist in the NZ Guild of Foodwriters Awards for best cookbook.

Much has been written about the perfect wine match for asparagus. My thoughts on the matter are why fight the asparagus flavor? Partner it with a sauvignon blanc, particularly one with a grassy or asparagusy character. I’m talking quintessential New Zealand Marlborough sauvignon blanc. A bunch of asparagus anointed with garlic butter served with a snappy savvie is one of those proverbial great matches. I think so anyway. Add a little chopped raw garlic and a touch of freshly grated parmesan for extra oomph. The melted butter wraps itself around the delicate asparagus and tempers the pungent garlic, but the biting acid of the wine as it cuts through it all, is positively thrilling. Just give it a try.

Despite what some wine experts say, I reckon there is no point in trying to mute the asparagus-ness of asparagus. I prefer to build on it. It eats well with a gutsy, capsicum-asparagusy sauvigon blanc, and can cope with those that have an herbaceous and cut-grass character. Throw in some garlic, which sauvignon blanc likes anyway, and you’ve got the chance of striking palate perfection. The fact that the new-release sauvignon blancs and asparagus arrive on the shelves at the same time in New Zealand is another happy coincidence and reason to keep searching for the perfect match.

For pure self-indulgence, asparagus spears rolled while still warm in soft white bread slathered in garlic and parmesan cheese butter is just gorgeous, as is hot spears on toasted wholegrain bread drizzled with garlic butter. Once you’ve got over such treatments, which I reckon are better eaten on your own so you can slurp, dribble and lick your chops in private, you’ll be ready to eat asparagus in public again. That’s when asparagus with lemon and a little cream tossed through pasta tubes comes in, followed by asparagus grilled this way and that, roasted or toasted, or sliced into salads. For a sophisticated fry-up, buy some good slices of ham off the bone, sizzle them in butter and serve with sliced hot new potatoes and asparagus spears. Serve an egg on the side and wolf it down – with plenty of savvie of course. 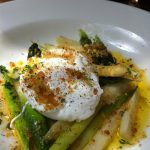 Asparagus, Pasta & Golden Crunchy Crumbs
This is good with linguine (flat slim noodles) but I like the way small pieces of asparagus and capers get trapped inside tubes of pasta so you get a double whammy in a mouthful! Read more