A weekend ago it was Garden Safari time on Waiheke. For around $30 you get the chance to sticky beak into a selection of gardens and homes while pretending to admire the planting. I couldn’t resist –mainly because I want to make a good fist of my new garden and it’s a bit of a puzzle (oh yeah, sure …). But hey, the Garden Safari is a charity event, the proceeds going to help unwell children and their families on the island, so it’s all good.

Off we set in the car, friends Roger and Tessa and me. It had just been serviced and got a new warrant. Sounded good. Heading towards Church Bay we all remarked that we could smell curry plant. That’s a silvery leaved shrubby herb that smells like curry powder. Full stop. I’m not a fan. I’d rather use curry powder than curry plant. Anyway, the smell was pervasive, annoying. Maybe someone had hid a bad Indian takeaway under the seat or something. No. Suddenly there was a chug and a puff of smoke, and holy cow on a narrow strip of road we had to pull over. The car had just died. We hadn’t even got to the first garden! That smell was bad engine mixed with local shrubbery.

Anyway, this is what ensued. Every car passing slowed and drivers asked if we needed help, and even though we insisted we were fine, one car pulled over. Out hopped Tim and Kim. To cut a long story short, they took me off to see the garden while Roger and Tessa got onto AA. When they were done, Roger and Tessa hitched a lift, as you do, and met us at the next garden. Then Tim and Kim took us all back to the car in time to meet the tow truck, then took me to my house so I could get my car and drive back to pick up my friends. Pretty normal behaviour on Waiheke I believe.

The road outside my house was turned into a dust bath last week as it was dug up in preparation for a new seal. It got sealed. I got laryngitis. Not contagious, mind, just little ole me not dealing with big brown dust. I got miserabilitis as well. Nothing for it but to make ‘mother’s medicine’: chicken broth (aka Jewish penicillin). Sunday was a stewy sort of day, warm and wet, not exactly stewy in the broth sort of way, but humid damp sort of stewy. Still, broth I made, dressed in shorts, with all the windows open. There’s something comforting about the smell of chicken bones, though, once they mingle with carrot, celery, leeks, bay leaves and thyme. I got it chugging along quietly on the back of the stove. I liked it.

I decided to have the broth with some baby pasta ‘pastina’ I had been saving for just such a miserable occasion. I always imagined the miserable occasion would be much more miserable than it was, but, oh, I’m such a drama queen, I just wanted to mollycoddle myself. I was about to tip some of the pasta into a pan of water when the date loomed into view: March 2013. Oh. I paused. I waited for my brain to say ‘what the hell, chuck it in’, but, no, caution prevailed. I was under the weather, vulnerable, didn’t need a tummy upset on top of laryngitis … you know that voice in your ear. I found a bag of skinny pasta noodles, all good through to 2016, and though not quite the idea I had fostered in the back of my mind with cute little pastina shapes, I crumbled them up and added them to the water. Those damn dates are more trouble than they are worth. We all ate old food before they were introduced. But now, a nagging voice tells you not to.

Oh, and those vegetables from the broth? You’d be mad if you don’t eat them. And pick the chicken meat off the bones, too. The Italians serve ’em up, drizzled with plenty of oil and a good smattering of salt, and away you go … 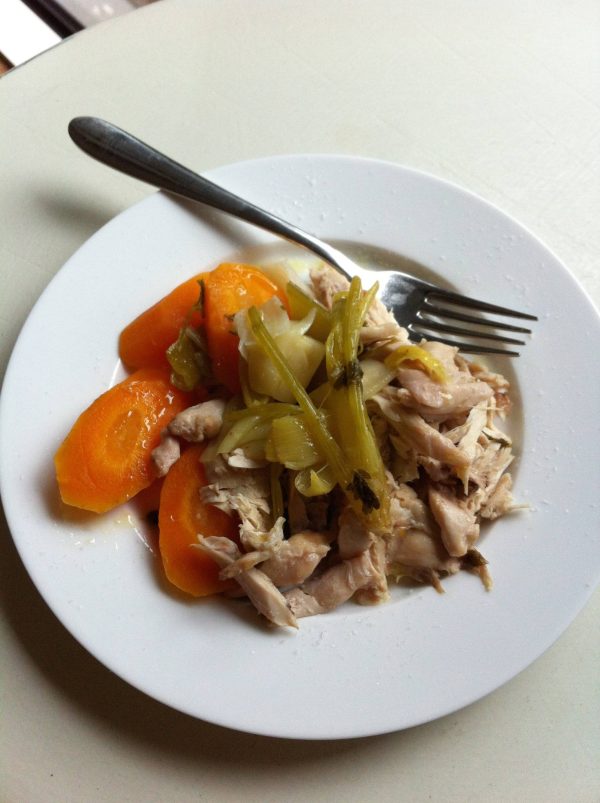 Vegetables from the broth