Rain was forecast for Monday last week, and sure enough, I woke to gentle pattering. Good. I like being in bed when it rains. All snugged up. But my stomach has got an alarm clock in it. And once it is time to get up, it’ll gurgle and rumble like an empty concrete mixer. The lifting of the blinds revealed a new Waiheke. Auckland was gone, a shadowy grey, and puffs of clouds in the mountains (well, the hill of bush!) drifted toward me. Mesmerising in all its soft khaki-greyness, otherworldly, Frodo-esque. The New Zealand bush. The tuis winged through the air snappily, other than that, it was pin-dropping quiet, a world hung in suspension waiting for what I didn’t know. The clouds swirled elegantly and the misty rain dropped. I went and made a cup of tea while I thought about it all.

I’d never really understood how you could collect enough rain from the roof of your house to fill a tank. In Auckland a couple of times I’d stuck a bucket out in a heavy downpour to see how many centimeters of rain fell, and I’d think, like, wow, I got half a bucket in 6 hours! It rained 4 days after I had moved to Waiheke, just a pitter-patter type thing, and I thought, well that’s not even a shower’s worth. I ruminated on this a bit and got concerned I’d run out of water very quickly if all I got from a heavy downpour in Auckland was half a bucket of water, and that a light patter of rain wasn’t going to keep my tank replenished. Then it rained again and I stuck out three buckets. Three buckets! I’d had the sense to buy a plastic basin and three buckets! Then it dawned on me. Of course, half a bucket of water was collected over a 28cm diameter surface, and the water I’d be collecting was from the whole surface of the roof. God, us townies! 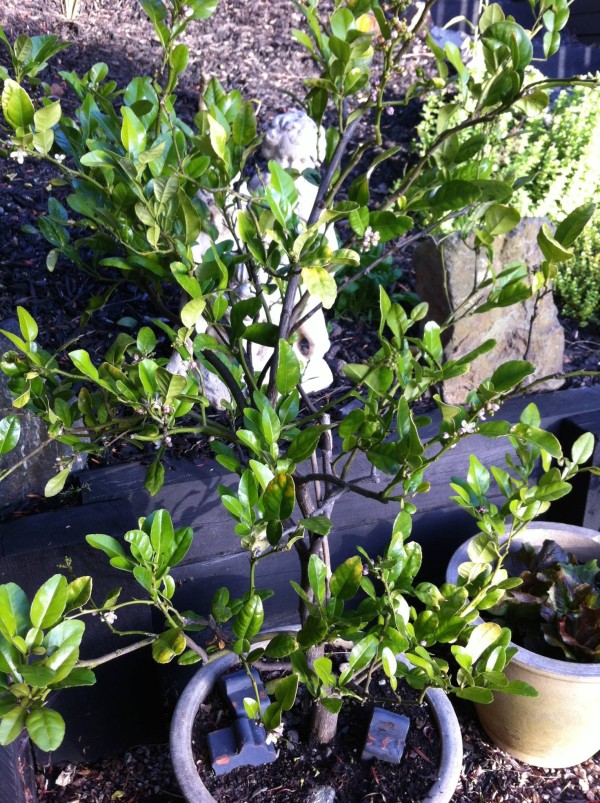 After Auckland’s free light show Saturday evening and in the early hours of Sunday morning (1300 lightening strikes according to the NZ Herald) today, the sun shines. And shines! It is glorious. But those aphids! I hope it is not a losing battle getting them off my kaffir lime tree. Again, a bucket of soapy water is my best friend. Wet soapy fingers run over the backs of the leaves collects everything that shouldn’t be there, including ants. It looks much healthier now.

I’ve gone for breakfast for dinner, as you do. Dinner for one, in the setting sun.