The Great New Zealand Cookbook published in 2014 by Geoff Blackwell, has at its core a unique concept: to gather together the favourite recipes of a raft of home cooks, chefs, bakers, fisher folk, food producers and growers from around New Zealand. In doing so, the book offers a snapshot of the food of our times, referencing yesteryear with contributors’ much-loved childhood dishes, and mingling these with handcrafted products, and those who make them, and adding great dollops of smart restaurant fare.

Celebrity cooks and multi-award winning restaurant chefs you would expect, but Willie Calder, an oysterman in Bluff, whose great-great-grandfather was the first bloke to catch commercial oysters in 1861, Jeremy Rameka, whose earliest memory is going eeling with his grandfather, Tony Kerr and his family of 5 generations of whitebaiters, and Rod & Johnny Clark, crayfish fishers in Kaikoura, and characters like Peter Washer from the The White Lady whose father started the ‘food truck’ business way back in 1948, and the inimitable Fleur Sullivan from Moeraki, are what give the collection depth, real grit, a true insight into the diverse range of foods caught, cooked and served in this country. The book has sold 120,000 copies to date, and has made a pretty penny for its dedicated charity KidsCan.

An Australian version, The Great Australian Cookbook, released last month, features 100 contributors who provide 165 recipes. OzHarvest is the chosen charity. If you liked the New Zealand book, you’ll love this one. (If you missed the Kiwi one, it’s still available in bookstores in NZ and online). You would expect to see the stalwarts of the Australian food scene in such a round up of national talent, the likes of Margaret Fulton, Charmaine Solomon, Cheong Liew, Stephanie Alexander and Maggie Beer, who, incidentally, are all highly esteemed Australians, having got an Honours gong from the Government. And the next tier who though no longer cutting edge, are still cutting it: the irrepressible Neil Perry and George Calombaris, the ever-practical Jill Dupleix, Kylie Kwong and her magic wok, and the father of modern Spanish cuisine, Frank Camorra. 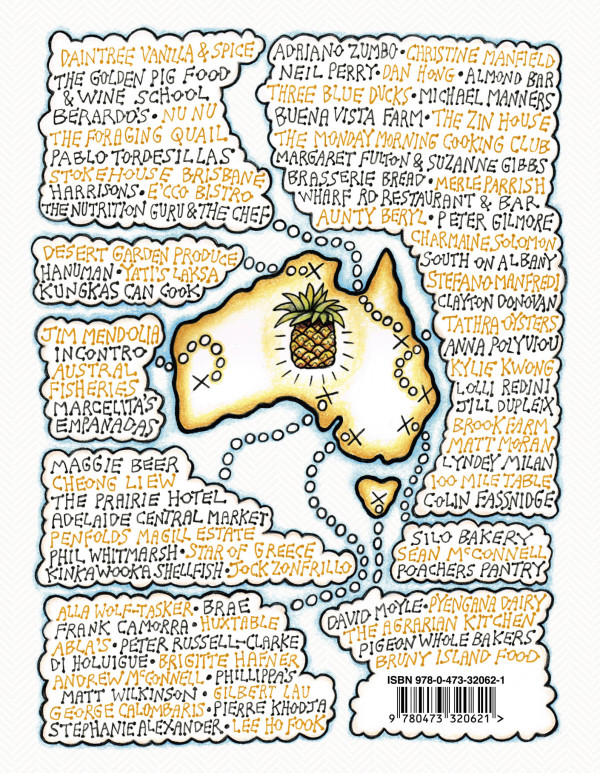 Back cover The Great Australian Cookbook

All well and good, but, like the New Zealand edition, there are also plenty of characters. Scientist Max Emery with his bush tomato damper shot in the desert hopes the population where he lives doesn’t increase anytime soon – it’s just 5 and counting – or he might need to move further inland. Jim Mendolia who a few decades back made the sardine fashionable, still gets up before dawn every morning to chase the blighters. Christiana Monostori peddles her laksa at Parap Village Markets to such acclaim she dare not miss the beat. Andrew Puglisi tells a story about how his grandfather arrived in Australia at 19 years old with little more than the clothes on his back and a fishing longline. He was able to catch enough fish to earn money to bring his whole family to Australia, where they remain today as fishermen. Indigenous foods purveyor Clayton Donovan serves up oysters with native fingerlime and thanks the women in his family for passing on what they know about his culture. These are endearing people with great stories. My only comment would be that I would have liked more, more of these salt of the earth types who cook and provide food for little glory, and I would have liked to learn more about them.

The Great Australian Cookbook is a mixed bag of recipes, full of the kind of food we know the Aussies love, and that we love, too, roasts and barbecued foods, baking, and big breakfasts and brunches, seafood and salads, celebratory dishes and comfort food, food that is much the same as what we eat in New Zealand, but there’s an appealing twist, as it is rich with immigrant dishes and indigenous ingredients and this gives it a flavour all its own.

The book’s sturdy, with a hard cover, and there’s a blue marker ribbon to hold your place. Every recipe is photographed. It’s one for the kitchen, filled with plenty of everyday food and ideas for midweek meals and stuff kids can make and enjoy, that’ll stand the splatters and splodges of everyday cooking. All this is set alongside great ideas for family celebrations and dishes to serve when you really want to show off.

Pineapple – Easy to prepare when you know how
Removing the eyes (little pesky bits) from a pineapple, and the core, ensures a tender mouthful of juiciness with every slice.
The remarkable date
Dates are seriously good for you. True!
Limes
Whoa - limes are a riddle. Persian limes are not grown in Persia. Mexican limes originated in Malaysia. South Indian limes are sweet, not sour!
Housette Update

Clamming it up at Te Matuku!
Serving up crunchy-topped clams.