This week I’ve been busy acquiring things. Friends took pity on me not having a television and offered me a spare set they had. Well, it’s hard to be polite and say, ‘I only want it if it is small, like really small’, without sounding ungracious. I was assured the television was ‘really small’, so they brought it out to the island last weekend. It is small. It is perfect. But it doesn’t go. Yet. I have been waiting 7 days for a technician to sort it out. No one available. Someone is sick. Someone has just resigned. Now that I’ve got a TV, I kind of want it to work. Mmmm.

Years ago I was reluctant to throw out an old phone I had because I knew it would work in a power cut. I stashed it away thinking it would be handy for Waiheke one day (yep, been planning on coming here for years). It moved with us when we moved house. Twice. I was hanging on to it. Now is its moment to shine. When the guy from Downer came to see me about the Internet and offered to set up my phone, I handed him the old phone. He smirked. He’s from the Philippines and he had never, I repeat NEVER seen anything like it. Was I sure it was even a phone? It didn’t work. Gutting. Are you sure? He lost interest. I put the phone away in a cupboard. Rather than give my business to one of the chains in Auckland I bought a new landline set on the island. All I had to do was stick the batteries in, charge the phones, plug them in and away I’d go. Batteries in. Fully charged. Plugged in. Phones don’t work. Someone will come next week to sort that out. 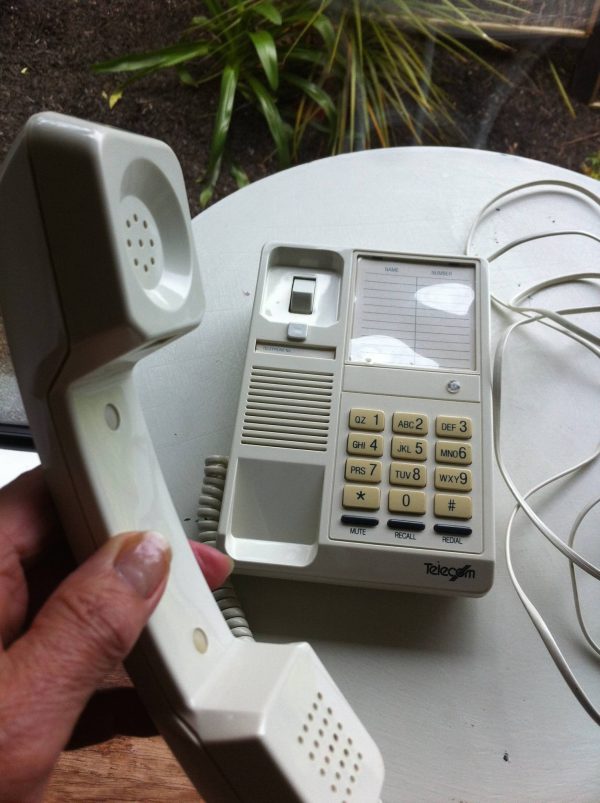 Hello? Is that the Philippines calling?

Then the pump. It pumps, when you turn it on. It was unplugged when I moved in but I didn’t discover that. So the little header tank filled up with rainwater and the water sat in the tank. When the big rain came last weekend, there was no more room in the header tank so the rain ran off the roof, into the gutter and down the drain. My lifeblood. God’s gift to the garden. Down the bloody drain. So we investigated and turned the pump on and the contents of the tank were pumped up to the main tank. All good, no harm done. 4 days later I go to do washing and the washing machine won’t work. The beer fridge has a puddle in the bottom. Well, what to do? Call someone? Going on the track record so far, it would take at least a week. Then it rained again, the header tank filled and I thought, I wonder if the washing machine will work? HaHa! It did. It’s going to take a bigger brain than mine to work this one out.

But I remain optimistic. There was a power cut in my street on Saturday. The power was out for three hours but everyone was cheerful. Vector people came and swung off the power poles, waving and smiling, as they fixed it. The power came back on. The radio blared. The fridge hummed. Things beeped.

My TV will work. My phone will go. The pump will pump. Just hang on in there girl …

Island Life – That’s more like it
Bacon & eggs for dinner? Why not ...get a glass of sav on the go, find a sunny spot and away you go. Read more