I moved to Rocky Bay about three weeks ago. I was in a big cage at the SPCA with my sister but I was at my wits end because she didn’t want to play so one day I nipped off a couple of her whiskers to see if that would spur her on. It didn’t. She just refused to talk to me after that. B-O-R-I-N-G.

I was waiting to go somewhere. I didn’t know where. All these people filed past my cage and lots of little ones ‘ohhhed’ and ‘ahhhhed’ and begged their mothers to take me home. God. What a nightmare. I didn’t want to go anywhere with kids picking me up, pulling my tail and smothering me with hugs all day long. I’m not saying I don’t want hugs, just that I know when I want them, not the other way around, if you know what I mean. I took to hiding at the back of my cage under a blanket when people came. In quiet times, or when I heard a voice I liked, I popped out and put on my best performance, you know, stretching, purring, doing baby soundless miaows, looking adorable, all of that.

One day this woman came along, I could hear her talking to the other kittens as she approached. She took ages to get to me. She was spending a lot of time with another kitten. A girl. A ginger girl! Imagine that! And, to be fair, this other kitten is nowhere near as cute as me, or so I’ve heard kids say. I liked the sound of the woman’s voice. Not too high pitched and annoying like the kids, and not shouty either, which can be spooky at times. When she got closer to my cage I had a good sniff. She smelled good, like a big roast beef kind of thing and it reminded me of my trainer. She got to my cage and I decided not to muck around. When she touched the cage I grabbed her fingers, not with my claws out, that would be silly, but a good grip nonetheless. Yep, she was my ticket out of here. She did go ‘oh and ah’, so I knew I had sucked her in. Then she came around to the back of the cage and picked me up. She was gentle and calm. An old lady type. Perfect. I’d be able to sleep in her lap in my dotage (got to future-proof my existence). I put on my best adorable sweetest performance, purred as loudly as I could muster, and do you know what? She said, ‘Yes, I’ll take him!’ And just like that I was bundled into a carrier box with my blankie and I was outa that jail at last. 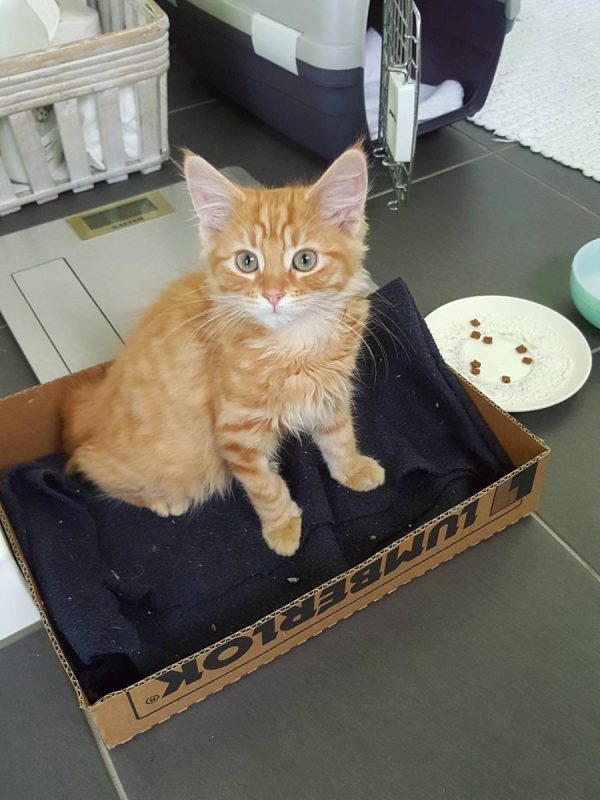 This is how I arrived, in the pet carrier behind me. I was a bit freaked the first day, but I soon got used to the routine.

My new home was scary at first. So big! So many rooms! But mostly I stayed in the bathroom for the first week. Sometimes I missed cuddling up to my grumpy sister, but not too much, because it’s all go around here. I’ve got a new name, too. I’m not Toby anymore (that’s a bit lame for a kitten don’t you think?), and now I am Humphrey.

I think it sounds rather important. And that’s exactly what I intend to be around here. 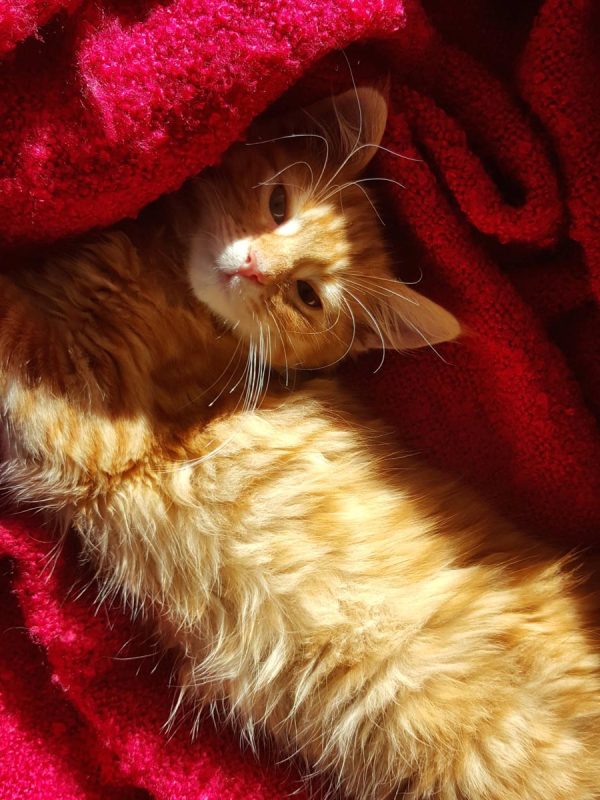 This is my new blanket – way bigger and softer than my old blue rag.

I love it when my new owner calls me HUMPF HUMPF HUMPF. Oh, it’s music to my ears, and I come running fast just in case there are biscuits on offer … She’s really nice, gives me cuddles, brushes me, I say BRUSHES me. It feels beautiful, really lovely, better than stroking. I’m allowed in every room except the bedroom, which is annoying because there are these lovely curtains there, with a silky sort of stuff in front and I can run in between them, but she gets ANGRY and says NOOOOOOooooooo! So now I am banned from going in there. 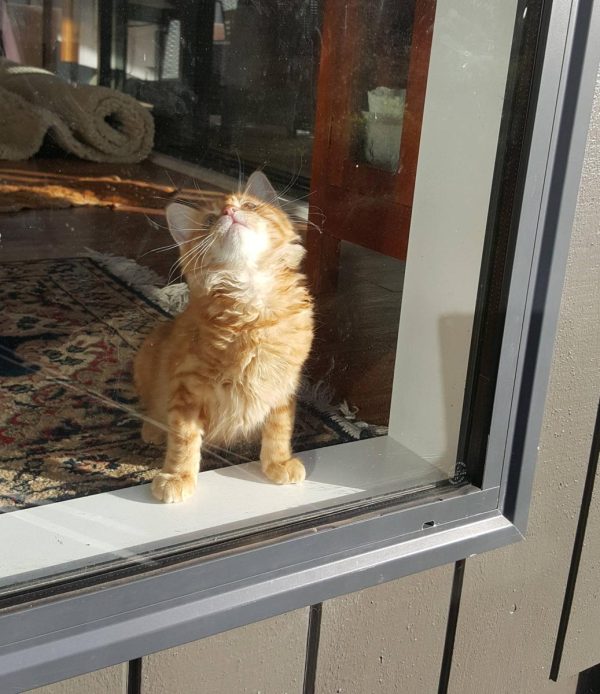 I know there is a fly up there … Oh yes, you see that rolled up mat?

She has also told me off for doing a piddle on the big fluffy white mat. I love that mat. It’s made of wool and I can scratch and claw it and bring up all these fluff balls, then just fall asleep where I am once I am tired. It’s so comfy. Sometimes I’ve been a bit lazy and can’t be bothered going to my poo box (that’s what she calls it) and I’ve just dropped it there. I get told off for that but she just picks it up and gets rid of it, but when I did the piddle she went bananas. Now the mat has been washed and had powder sprinkled on it, it’s been vacuumed – that’s a scary thing, the red noise machine, and I can’t ever imagine being friends with it – and now the mat is in the sun. If I so much look at it I get a big loud NOOOOOOOooooooo!. Mmmm. 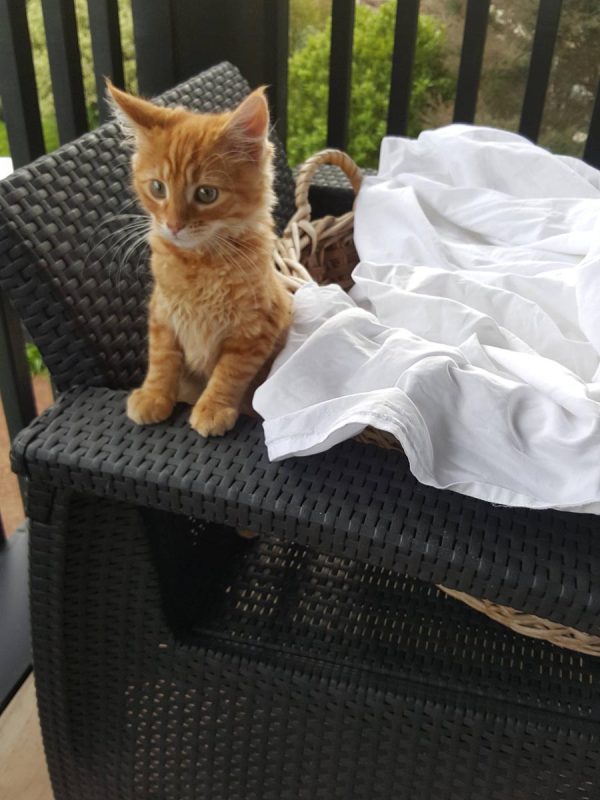 Sometimes I help with the washing. I love swinging on the sheets!

Anyway, I’ve gotta go and do you know what, now you mention it, and don’t want to get the big NOOOOOOOooooooo again. I’ll let you know more about life in Rocky Bay later, now that I’m a resident. That sounds quite prestigious doesn’t it? Humphrey of Rocky Bay. Way better than Humphrey, Cage 4, SPCA, Onewa. I’m sure you get my drift.

Pineapple – Easy to prepare when you know how
Removing the eyes (little pesky bits) from a pineapple, and the core, ensures a tender mouthful of juiciness with every slice.
The remarkable date
Dates are seriously good for you. True!
Hot-smoked Salmon & Avocado
No recipe required
Rotolo di Frittata
This is really just a fancy-pants frittata. Check out the 'how-to' pics.
Quick Mince Pies with Apricots
Xmas countdown ... be ready!