On a recent winter’s night, more than 50 food writers and professionals gathered at the Pah Homestead in Hillsborough, Auckland, for an evening of food, wine and discussion. Julie Biuso reports.

The moot was: “Everyone is a food expert these days.”

The very illustrious debating teams were Sam Mannering, Niki Bezzant and Warwick Brown for the negative and Bill Ralston, Nicola McConnell and Julie Biuso for the affirmative. 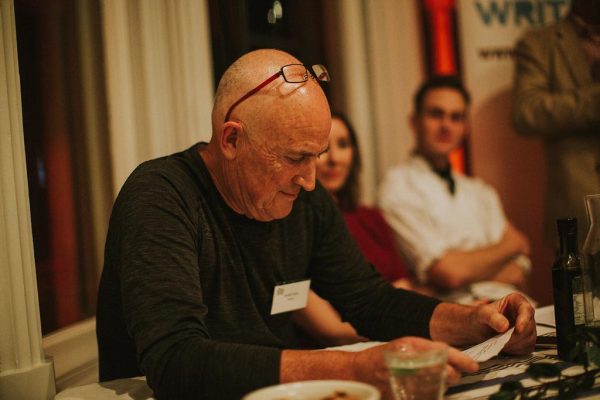 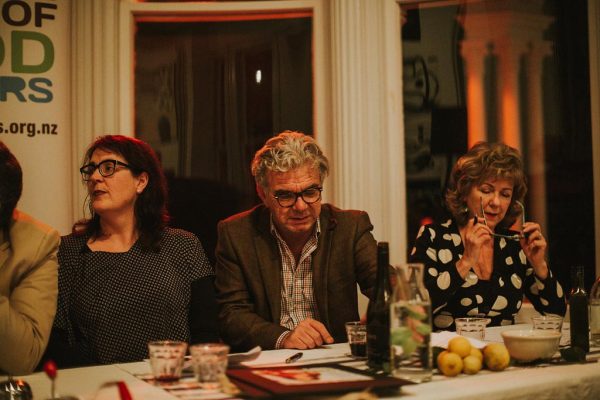 Team 1 getting things in focus

How I ended up on a debating panel I’m not sure (I’ve avoided them all my life). A weak moment, perhaps, but barring the ferry sinking as I travelled from my home on Waiheke to Auckland on the evening of the debate, there was no getting out of it. I studied the words, looking for clues. I looked behind them and around them, moved them apart and put them back together again. It was a fairly bald statement, and I was getting nowhere, then something weird but fortuitous happened. The moot changed from “Everyone is a food expert these days” to “Everyone is a bloody food expert these days”. I liked that. I liked that a whole lot more. Now I had something to chew on.

As a first-time debater, I drew the short straw and was the first to speak. Holy! I never saw that coming. I thought I’d go last and make my argument by picking holes in what the opposing team said. No. First up meant I had to frame the argument and state a case clearly for the other team to disprove. I launched in, wishing the Soho wine hadn’t been quite so inviting and the dinner so delicious. 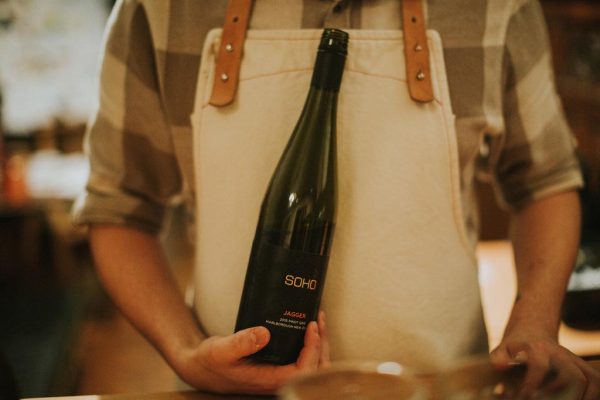 So what makes someone expert in food? Is it a learned person who reads instructions on, say, how to prepare an artichoke? After all the reading and studying of line drawings they can tell another exactly how to go about it, but under the pump they fail to execute the job themselves. Or is a food expert someone who watches a YouTube clip showing how to prepare an artichoke over and over again, who then goes into the kitchen and dissects an artichoke and extracts an intact artichoke heart? The YouTube watcher has certainly become an artichoke heart-extracting expert.

Can we trust our own judgement and say if we grow, pick, select, cook and eat food every day we become quite expert at it? Yes, we can. We know lots of things about food and we are indeed expert at not killing ourselves with poisonous foods. With the knowledge available these days, we are all food experts. Neat and tidy, I reckoned that was my argument done and dusted. 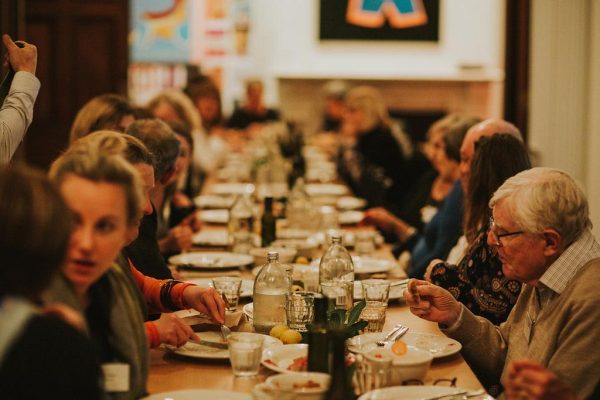 The question to be or not to be certainly got some of them talking.

Sam Mannering rose to the challenge stating he hates the word “expert”. He argued that you don’t have to be a food writer to be a food expert, a food expert doesn’t have to write recipes, and that not everyone knows how to write a recipe, and not everyone can write about food. He believes he knows more about food than the average person, that the general public take what you say as gospel, so you have to be careful about lying to them, and that a food writer has an obligation to do it well. He urges it is best to come clean and admit mistakes when you make them, and that he is still learning. He said a whole lot more, but he was wearing a kilt and it was distracting. 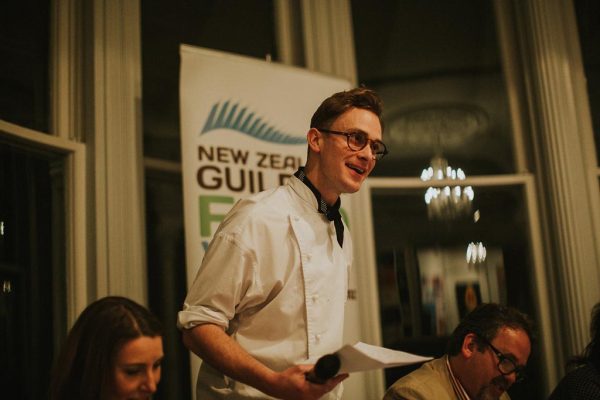 Sam had them there for a moment but couldn’t quite pull it off (n0, silly, not the kilt …).

Bill was up next and proclaimed he was Aunt Daisy, or maybe it was Daisy the cow. He is not a big fan of raw food and thought a better idea was to feed it to the cows, then he could eat them. Much tastier. The point being, raw food is taking a step backwards. He advised you should always eat with someone who is fatter than you so you feel slimmer, and that calories eaten when no one sees are not real calories, though they might give you cankles later on. And robbing food off someone else’s plate doesn’t count in his books either. This was all very deep and important and I liked the way the debate was going. 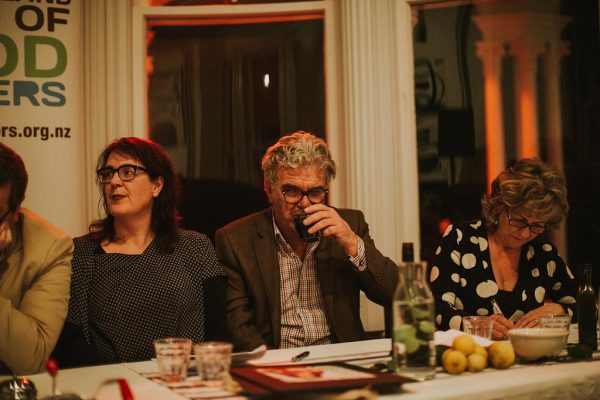 Would you trust this man in your electorate … you might have to!

Then Niki popped up and she really lowered the tone of the debate, speaking facts and quoted figures. She talked sense, god dammit. She believes unskilled individuals suffer from illusory abilities and said although there was a lot of expertise in the room, we were all still learning. Crikey, she thinks self-opinionated experts are dangerous. Well, that wipes out all the food bloggers in the country! And that people talk about food as if they know everything. We do, don’t we? Niki was doing so well …

But the weird kinda channeling didn’t cut the mustard. Then came lovely Nicola. I liked her immensely because she had a mega-important line and that was all we needed: “I eat therefore I am… a food expert.” Easy. Well done. We aced them with that. She followed this up with, “An opinion about food makes us a food expert.” Slam dunk, I would have thought. 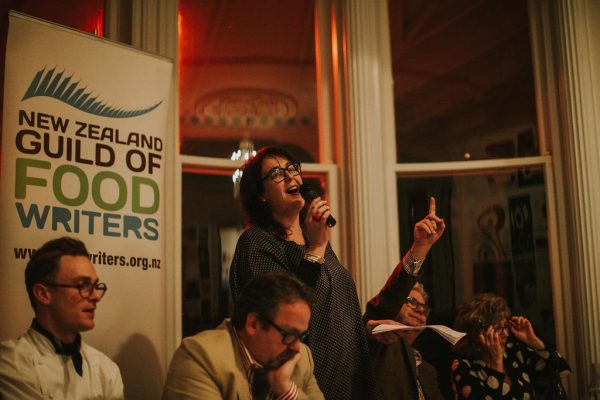 Nicola floored them mate! Just stuck it to them. Bill seconded it while I checked the crowd for flying missiles.

Warwick wasn’t having a bar of it, in fact he was having his own little trip. He said he loves food writers and he loves food critics, good food critics. But that he HATES bad critics. They kill your business. Suddenly the room was electrified. Who was he talking about, what was the name of the monkey on his shoulder? Oh, we were enthralled. He blamed unqualified people, and said critics are not experts. It was very heartfelt, and he won the crowd over.

My job was not easy, then, to snatch victory from the jaws of defeat with such popular rhetoric, applause, sympathy, quotes, kilts, facts and figures. And wine. But I swayed the naysayers with a repeat of the line “I EAT THEREFORE I AM… A FOOD EXPERT” and summed up my main points: We all eat, we all have an opinion about what we eat, you become knowledgeable about what you like, what you can eat. We know what not to eat. We become expert about food, how to keep ourselves alive. 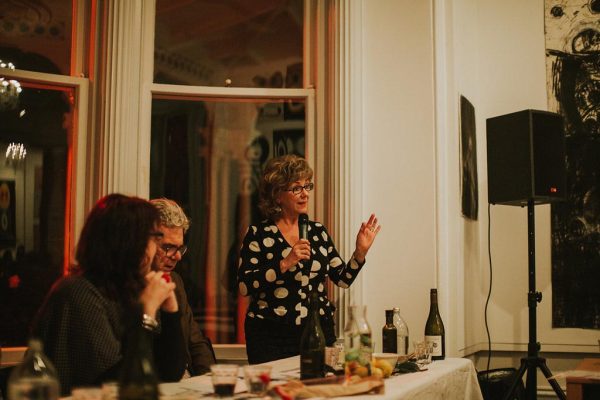 Oh yes, I had them in the palms of my hands, and so, it was time to drop the clincher: We are all food experts. Just cut yourself once and you are a bloody food expert.

Yes, we won! Our arguments were so strong, so deep and well crafted, so meaningful and wide-reaching, that Sam’s chitterings, Niki’s posturing and Warwick’s poke in the eye seemed trivial, mere fluff and flimflam. Our prize? A munted cream beater, so awesome, so desirable, so absolutely-not-going-in-my-kitchen, that we gave it back. The winner will get it next year. 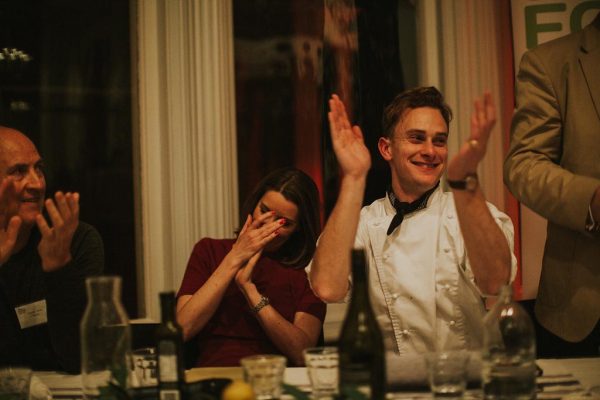 The losing team thought we were absolutely amazing, deserved winners. Bill brought along a picture of his girlfriend or something. Lovely Bozzles summed up the debate then had a mother of a glass of wine, as you do (ignore the sobbing one on the left; he went home in an ambulance). 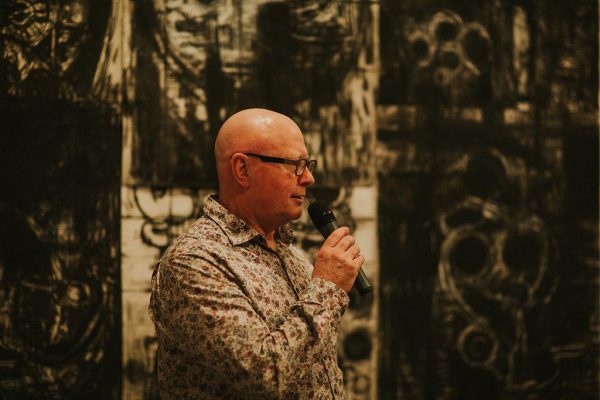 Oh, and a new artwork went on sale during the evening: ‘Man in busy shirt unable to wait for Giappo’s dessert’ (Don’t think ‘it’ sold ‘cos he drove me home!) More than cute – they’re edible!
Ah yes, hippiedom, flower power, all of that, but no, actually, these flowers are for eating not sticking in a vase or around your hair. And pretty they look, too. Read more
Cake Cutie on Waiheke
Heading to Waiheke? Indulge in delicious offerings at The Annex. Read more
SPQR
I’ve been eating at SPQR since the beginning of time, or at least it seems that way. Read more