Beetroot was far from my thoughts this past Monday. My intention was to run a test through chicken, yellow pepper and green olive skewers on a watermelon and feta salad. It was a busy day, on air with Jesse Mulligan on his Radio NZ summer show, then to the ferry to pick up husband, son, and half-Polish friend and his new Polish wife who were here on holiday. I had daughter Ilaria with me but left her in Oneroa so we could fit everyone in poor Fifi (my Fiat!). I zipped down and picked up the ‘arrivees’ from the ferry, then took them up to Ilaria in Oneroa who was waiting for us in a café, spent 37 minutes exactly in each other’s company, then dropped llaria back at the ferry to go to Auckland. I sped (well, 45k’s!) back to the main group in time to eat. I am not going to say where we dined as it was a disappointment. No matter, our Polish pals swum at Onetangi, ate Island Gelato ice creams and bought lovely little knick-knacks. The sun shone. Good. Our island delivered and they loved it.

I dropped them all back to the ferry, stopped at the Oneroa Butcher to pick up chicken breasts because I have the aforementioned dish in mind. Two small and plump fillet steaks winked at me, so I buy them, thinking, ‘oh yeah, you never know ..’ And that’s right, you never do know.

The chicken breasts and I arrive home. Great. I’ve got the energy to cook. I’m going to ‘knock the bastard off’, so someone important once said. Watermelon in fridge. Feta in fridge. Herbs? Yep. Lemons? Yep. Oh damn. No yellow peppers. Don’t you hate that moment? A moment of indecision when you look at the glass of wine you have just poured yourself and wonder whether you can be bothered to change out of your ‘daggy at home’ clothes (having just changed into them), get in the car and go to the supermarket for just one thing? I decide not to. After a day running around I decide I need to chill.

I had energy though, so I rocked on to another idea. Baby beetroot and carrots. Now there’s a thing, I thought, there’re heaps of possibilities. I really wanted to do them with red rice, but that would have been stealing Ilaria’s thunder (oh goodie, another cliché!). She’s working on a recipe for this. Soooooo. I roasted the carrots anyway, and that was fortunate. 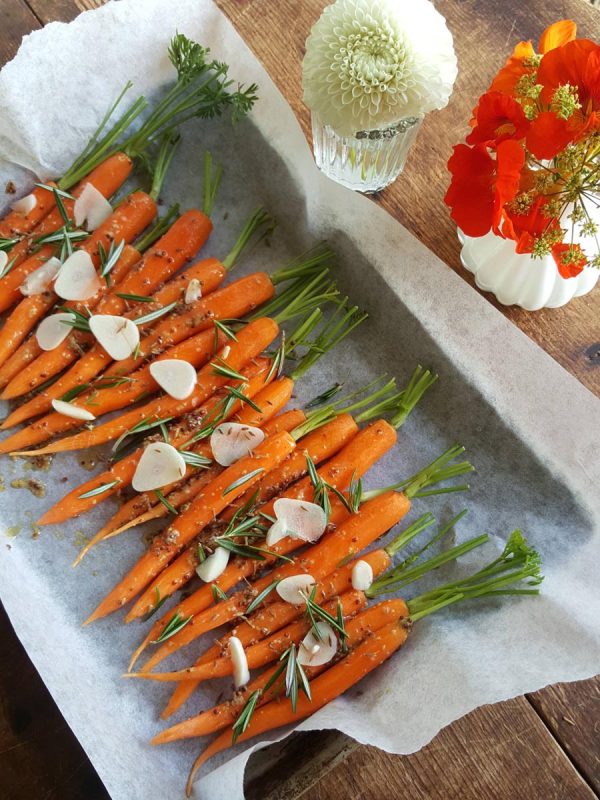 Then I blindly followed MasterChef. Oh what an admission! Well, to be truthful, I really like Australian MasterChef, none other, just the Australian one. I’d seen a contestant bake beetroot leaves, Why that should have surfaced at this point I don’t know, and did I know how to do them? Nope. But I proceeded. I treated them like kale, rubbed them with oil then had the bright idea to dust them with sumac. How stupid can you get? As stupid as that idea. Yep, the sumac burnt and I had quite good leaves but smelling like charred embers and tasting not a lot better. 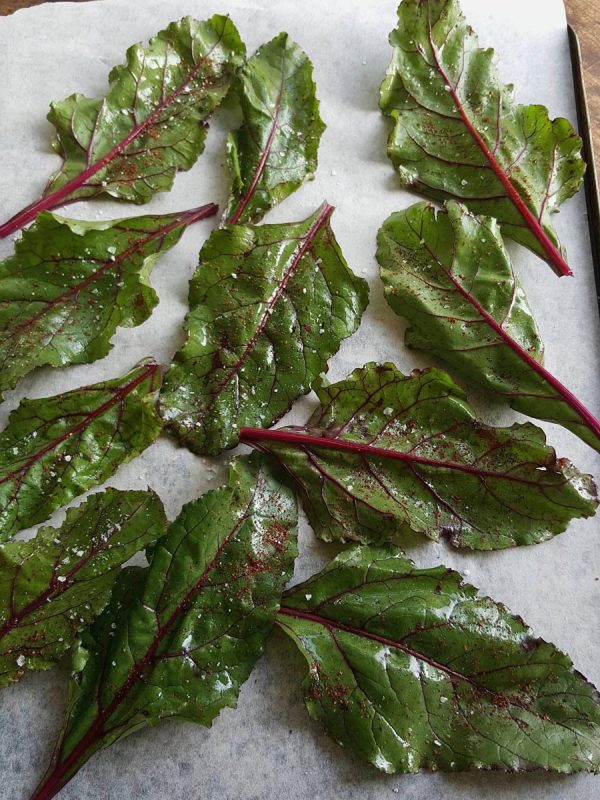 The beetroot fared somewhat better. I rubbed them with oil and crushed coriander seeds and rolled them in foil, as I’d seen the MasterChef contestant do. I had no idea how long to cook them, so tried 15 minutes. Not ready. Another 15?…No … actually 45 minutes. They were quite good, and had lots of flavour and a nice firmness to them. Later when I watched a replay of MasterChef I saw the contestant put all the beetroot in one foil package, which would have created steam and helped them soften more quickly, and it would have produced juice. And saved the planet by not using so much foil. 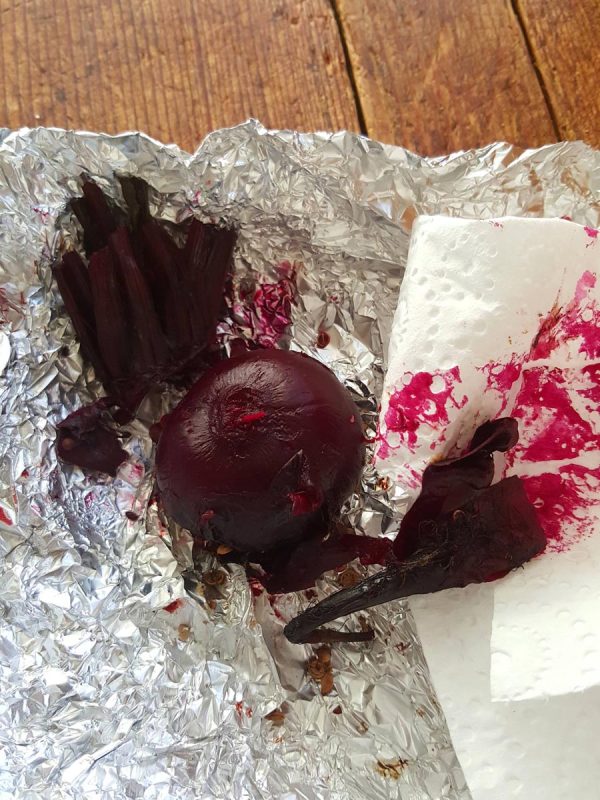 I had goat’s cheese, so although it’s an obvious combination with beetroot, it’s a good one. The goat’s cheese was past its expiry by a month but that didn’t deter me. I had the carrots. I rubbed them with mustard and oil, then strew them with rosemary, cumin seeds and garlic. The carrots rocked! Simple, tasty, sweet – yes, they’re good carrots. 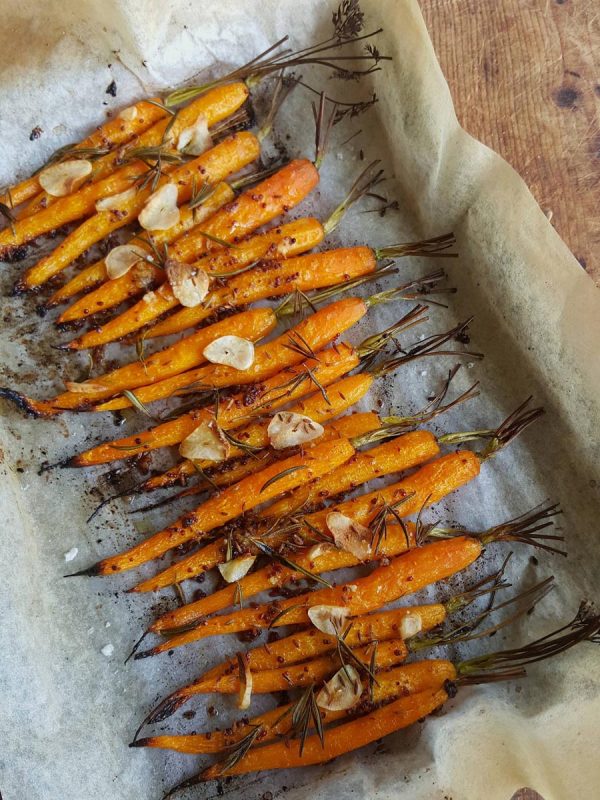 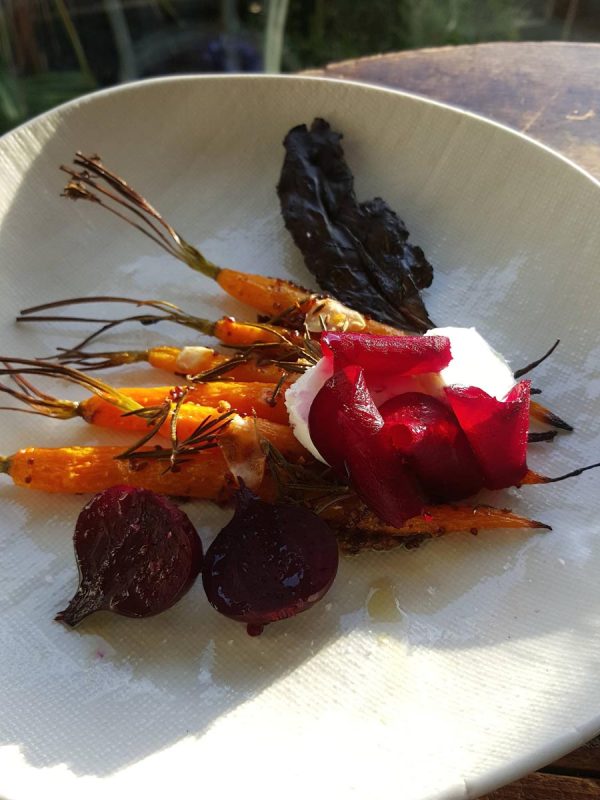 Then I remembered the steaks. I whipped them out of the fridge. The steaks were cold! But unperturbed, with dinner in sight, I doused them in oil and flopped them into a hot pan. 3 minutes a side. Onto a plate, sprinkle all over with salt, then the pièce de résistance, à la Gordon Ramsay, a dollop of Lewis Road sea salt butter. I’m not sure that Ramsay had access to Lewis Road butter when I saw him do this on TV, but that’s where I got the idea, and OMG can it improve a steak!!!! So, there you have it, a couple of vege on a plate with a nugget of steak. It was good, although I don’t think I would bother with all the faffing around with the beetroot leaves again.And the mess! 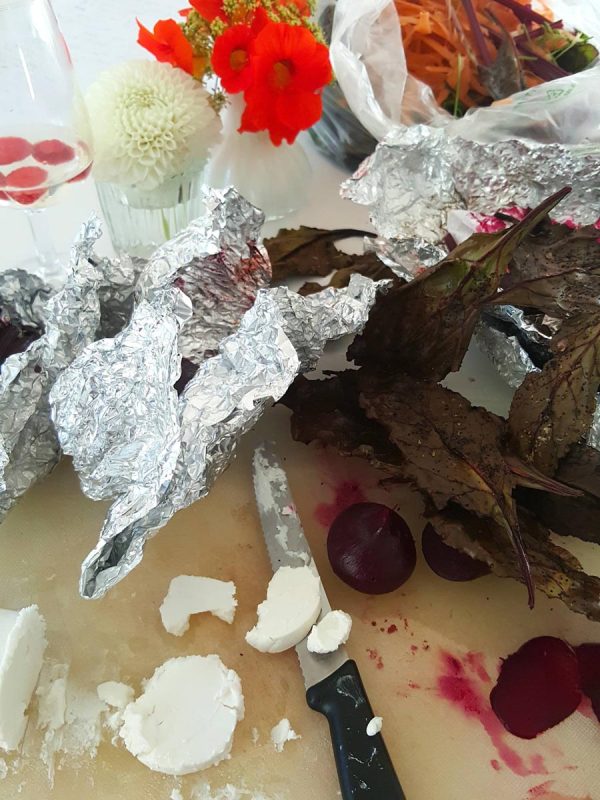 The sun was setting over the hills. Humpf was happy catching flies. And I poured myself a merlot. That’s when it all got a bit loose. You see, I realised that the steak and carrots tasted pretty good together, and were much enhanced by the merlot, but the trouble was, I had run out of steak. So I cut a sliver off the second piece of steak. It was more buttery, more melt-in-the-mouth than the first. It was so incredibly succulent and tasty, oh god it was good, so I cut another sliver, then another, then a slice, then, oh, HELP! I gobbled the whole thing up. Oh holy cow (literally, OR NOT!).

I felt bad. Really bad. I had deprived myself of a lovely steak sandwich for the next day, but worse, I had eaten the steaks I thought I would share with my daughter in a day or two.

The sun set. The wine tasted good. Humpf ran around chasing his tail. My head buzzed a bit.

Then I was feeling like I should run too, like, run around the block, run the guilt off, or something. Well of course, we don’t have ‘blocks’ on Waiheke, so I tore down the steps and up again, and thought, that’ll have to do, but I was invigorated. That was a MEAL indeed.

Perhaps when I lie in bed I will have such guilt over eating two steaks, though I doubt it. I think I shall be drifting off with the memory of charred beef dripping in Lewis Road sea salt butter with the warm scents and flavours of cumin, sweet toasted garlic, rosemary and merlot. OMG what a delicious mouthful. Quick! Goodnight! I want to pop off and dream the dream while the memory is still sweet.

The lesson to be learned: don’t blindly follow stuff you’ve seen on television (unless it is Gordon Ramsay who you may loathe but who is undeniably an incredible chef). It’ll never work. The beef and beetroot recipe had 17 steps. 17!!! You’ll likely be making dinner for the next night. I mean, how are mere mortals like us going to compete with a chef who has a sous vid-aye, a mega mix-ahhh, a blast chill-ahhh, a giant blend-ahhh, a pressure-cook-ahhh and a smoking guunnnn and pocket-poppet George Calombaris at his or her side?

Question: Why do young Aussies turn words like chiller (freezer) into chill-ahhh? Is it going to happen here (please, please no).

Lamb Shanks with Mint & Date Stuffing
I make these in a slow cooker, but you could cook them slowly in a deep heavy-based casserole. Oh, and these are exquisite by the way. Read more
Carrot, Caper & Broccoli Salad
Bright winter cheer. Read more
Autumn Salad – as pretty as a picture
Pears and beetroot, walnuts and blue cheese, edible flowers and salad leaves ...mmmm Read more