It may not sound very glamorous, but it’s true nonetheless, although it has to be clarified that I didn’t actually make soup in my dressing gown, but rather in a pot while I was wearing my dressing gown (but where’s the fun in a heading like that … ‘I made soup while wearing my dressing gown’ … Nah!). Anyway, yesterday around about 11.00am, the time when Shared Kitchen usually goes out, my daughter Ilaria and I were sitting huddled together on a couch in our dressing gowns looking at old photos rescued from the flooded bedroom below us while a pot of soup bubbled away on the stove.

Yep, flooded. Sheets of rain fell from the sky. For hours. It’s rained heavily here many times before and made things soggy but this day it was different. Maybe the earth was too dry to absorb all the rain, maybe it was the full moon, or a high water table, or maybe that’s just how it was and that’s that. Whatever it was, the water spouted up out of rock (geysers!), formed rivers, gouged out earth and flowed down to the sea. Across my property. (Of course I was not the only one affected.) 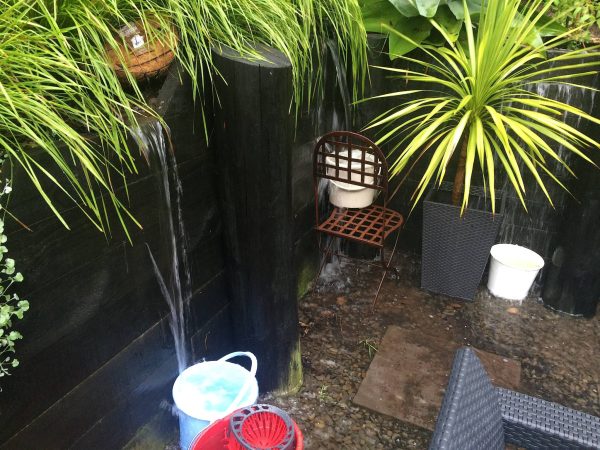 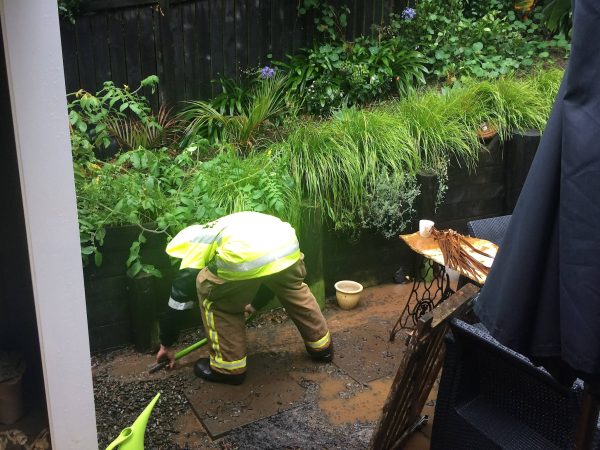 Trench no 1 being dug. 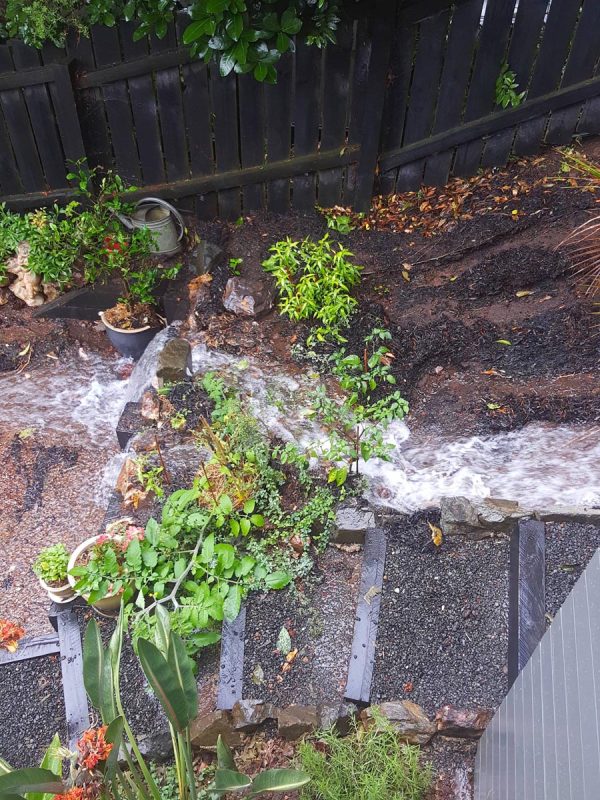 The power of water … on its way through Trench no 1. 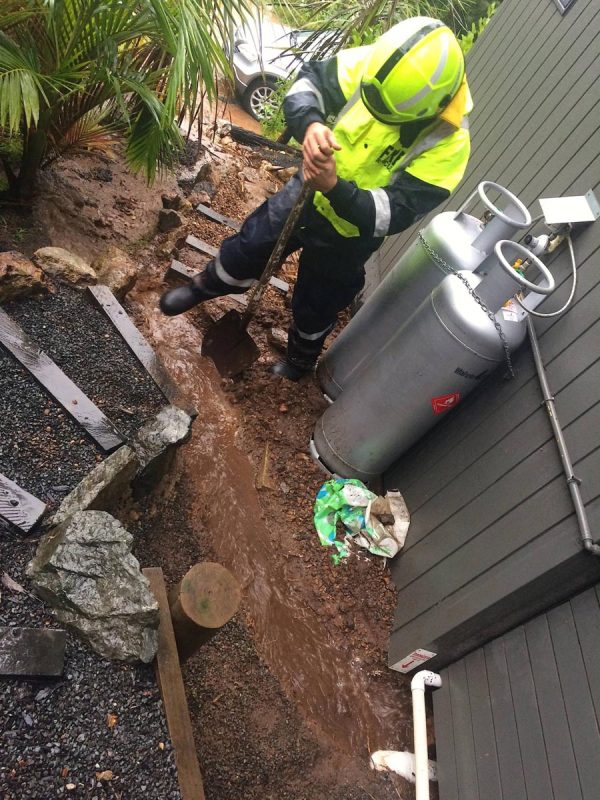 Trench no 2 being dug.

I woke to gushing water outside my bedroom window about 6.00am and on investigation found I was ankle-deep in water. I tried to stem the flow with rocks. Useless. And it was spooky in the dark. I tried carting buckets of water away and turfing the water on the driveway. To no avail; a bucket filled in less than 10 seconds and with 5 buckets on the go I couldn’t keep up. I woke up Ilaria to help and she went, ‘mum, the carpet’s soggy’. In the light we could see the whole house was surrounded by water. Clearly, we needed assistance. I called 111. The Waiheke Volunteer Fire Brigade arrived about 15 minutes later: 4 big blokes kitted out in wet weather gear and big boots. They turned off the electrics then set to work digging deep trenches either side of the house and diverted the water into these. The water now went around the house. We had our own private moat! Obviously, it was not really funny but in bad situations you’ve got to get your jokes where you can. To say they did an amazing job is an understatement; two of the men had been on the job since they got their first call out at 2.00am. Bruce The Chief, Rob Smith, Alex Mansell, Blake Griffiths and Ben King you are awesome dudes for volunteering for this work and Waiheke is lucky to have you (excuse the spelling of your names if not quite accurate). And if you happen to know any of these guys, give them a shout out. All I could do was make a cup of not very good inky black coffee and offer a McVitie’s Digestive biscuit. Man I was thankful they came. 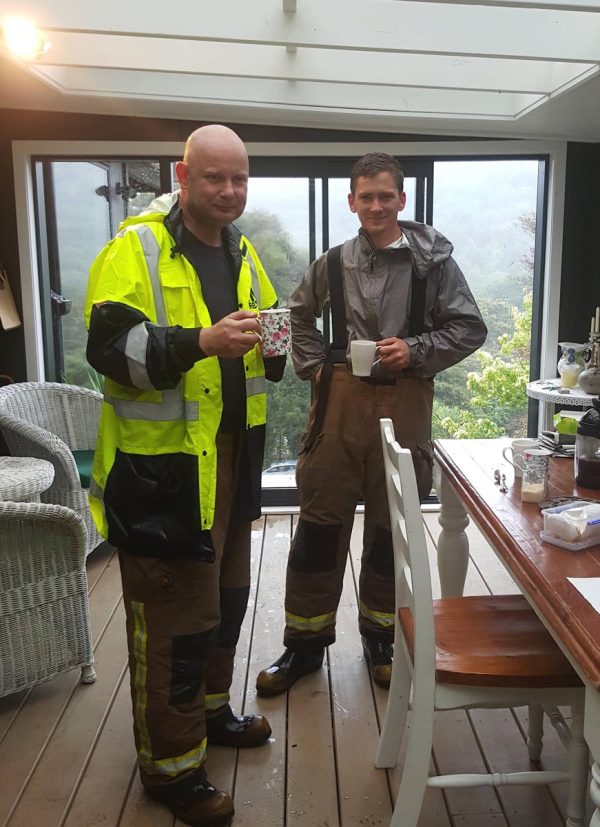 Awesome dudes (even more awesome cause they drank my thick-as-mud coffee without complaining!)

Then I needed to get the electricity assessed for safety. 1234 Electrical, an established Waiheke company, were with me before midday and got everything up and running, but while we were waiting for them, power-less and internet-less, and cold, Ilaria said ‘Let’s make soup’. I thought she was crazy, but then I thought, actually, it’s not a bad idea. So we got peeling and chopping anything we could lay our hands on and had a pot of soup bubbling away in no time. It’s amazing how doing something practical, something familiar, can be so comforting. And the smell! Oh, glorious soup smell of softening celery, carrot, onion, garlic, thyme and rosemary … it soon filled the house… so we sat on the couch looking at old photos we had rescued from the damp downstairs while we waited for the electrician to come. One has to say that having gas (even though the ignition won’t work, you can still light it with a match) is a godsend when you have a power outage, or emergency turn-off as in our case. You can boil water for tea, toast bread over the flame, and make soup. Making soup when your house floods? A really good idea Ilaria, thanks, because it gives you a sense of purpose, something practical to do, and then you have something hot and nutritious, and hopefully tasty, and something to share with your neighbours or people who come to give you a hand. Thanks also to Luca, my son, who rushed over to empty the flooded room and suck up water in a vacuum cleaner. That’s a tiresome thankless job, but it does work. And my neighbour Mark who dug more trenches for the water to flow through more quickly and today brought over a dehumidifier. Driving around the island yesterday afternoon I could see all sorts of people helping each other clear driveways that were banked up with stones and gunk and workers quickly clearing all the slips from the sides of the roads, and I felt a real sense of community. I like that about Waiheke. 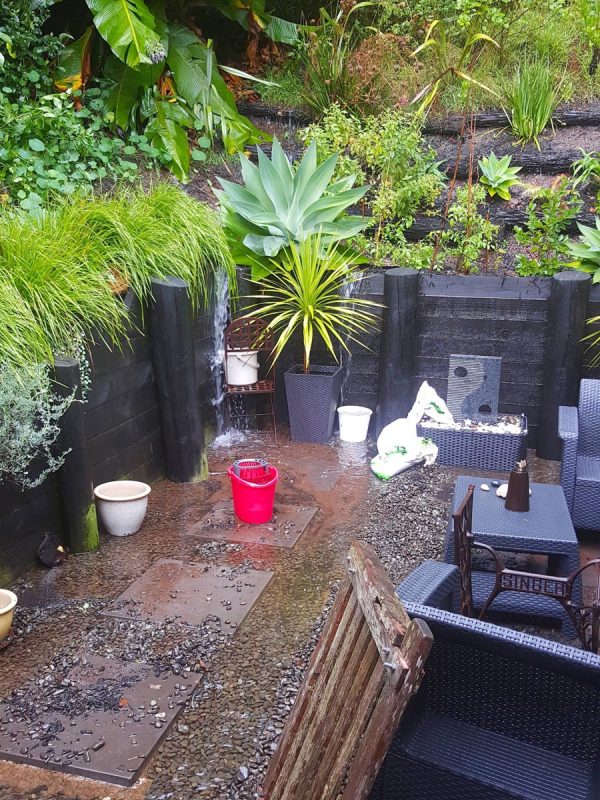 After the rain had stopped the waterfalls continued for 12 hours. 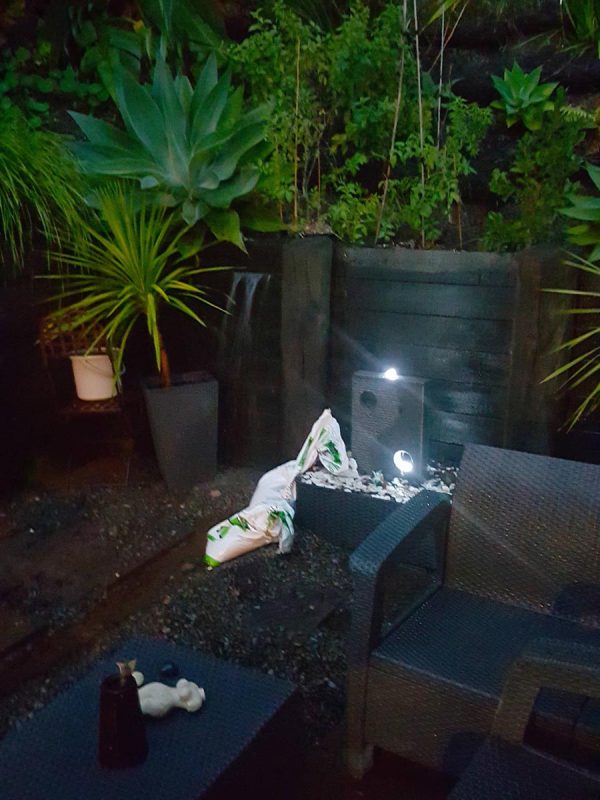 Night falls … on and on like a leaky tap! And so loud!

Today, everything looks sad, ruined and depressing, but those damned cicadas still sing. While the trenches go either side of my tomato and chilli plants (thanks firemen!), I’d say the garden is pretty stuffed. I’ve never been through anything like this, and it is so minor compared to flooding in other parts of the country – although we did have a floating container of antique furniture in Tahi Road so the local story goes! I now have a deeper understanding of what a flood actually means, and a respect for the power of water. I hope that where you are it’s dry, and that you are safe, and if I can suggest, if you feel a bit miserable, make a pot of soup. It really helps, and it will feed plenty and warm you all up. And if you want to share your story please email me at [email protected] 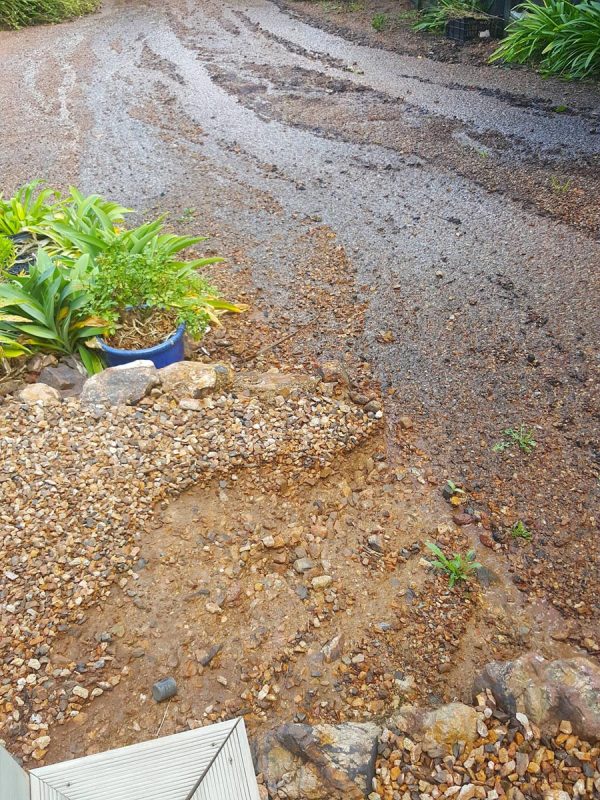 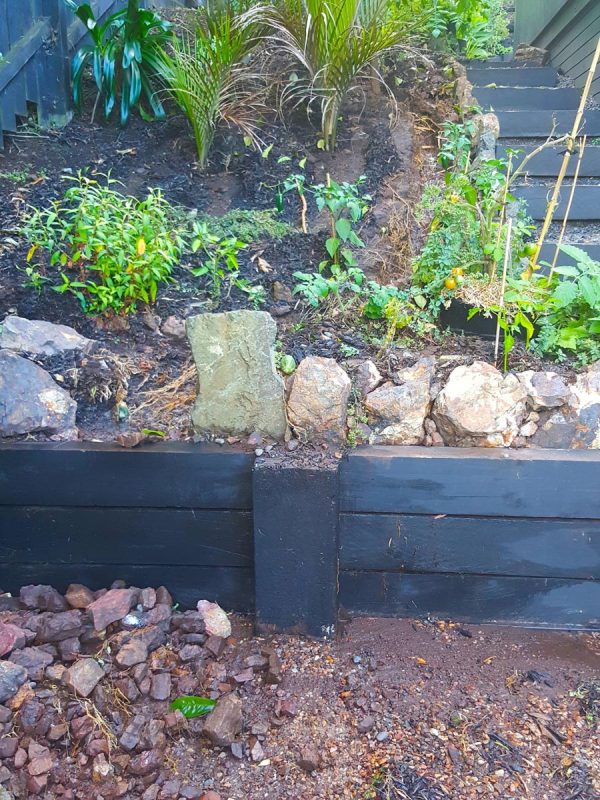 Rock wall damaged – took me hours to build it unaided but guess I can do it again. 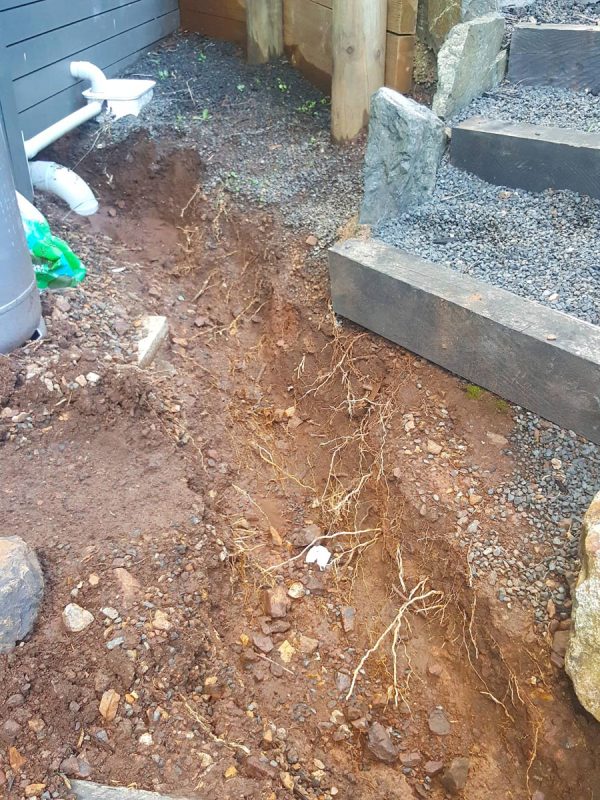 Trench 2 – my new landscaping. Watch out for the missing step.

Black Bean Soup with Avocado
This is sort of like tacos, but in soup form ... and way sexier! Read more
Curried Parsnip Soup
Warming, satisfying and so very tasty. Read more