The best ever crackling!

Here are the golden rules

Ask your butcher to score the skin carefully. If the cuts penetrate through the cap of fat into the meat, juices will escape and form steam and prevent the skin from crackling. If the leg hasn’t been scored properly, score it with a sharp Stanley knife. Don’t cut into the meat because juices will come out and stop the crackle from crackling! The recipe for pork belly (pictured below) can be found here Pork Belly with Cider. It’s prepared slightly differently to a roast of pork, though the storing and drying, scoring, oiling and salting technique is the same. And another recipe Pork Belly with Aromatics 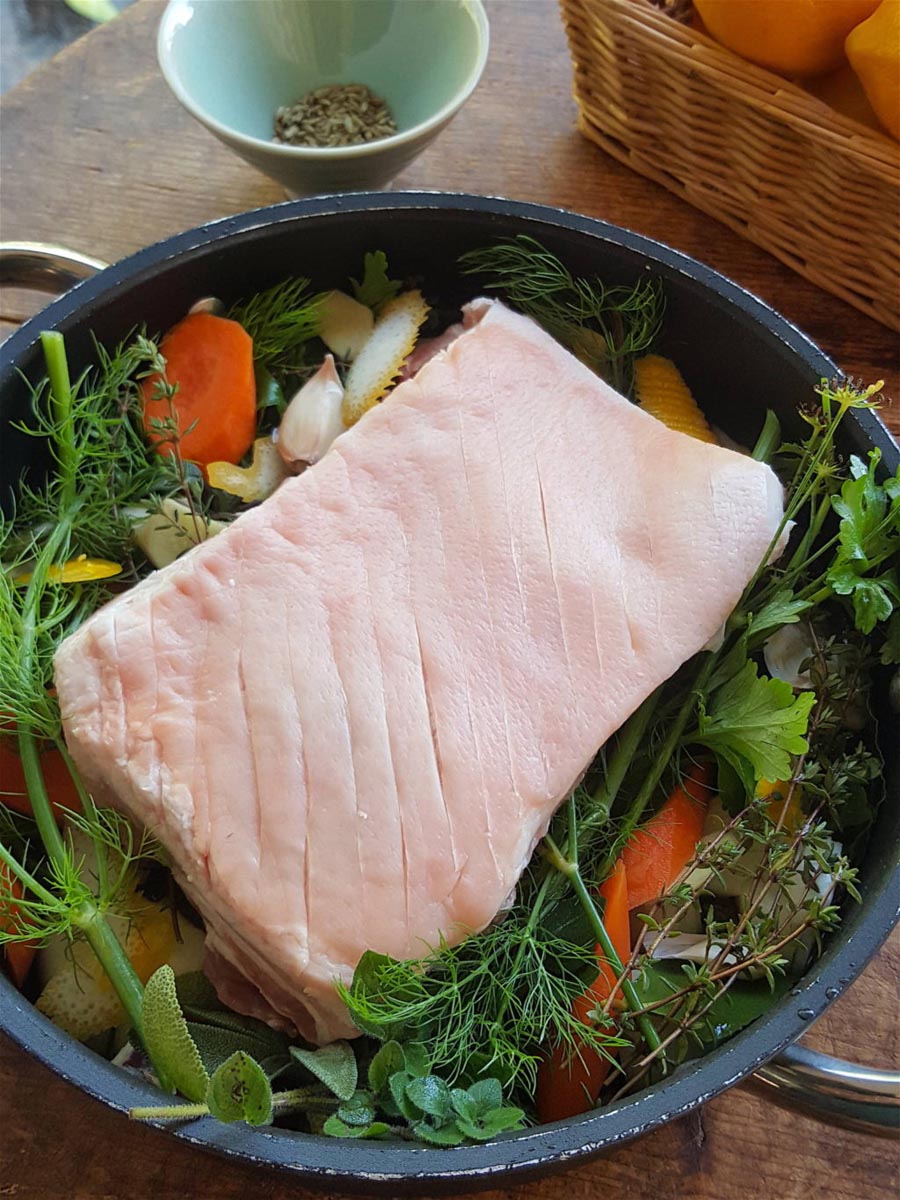 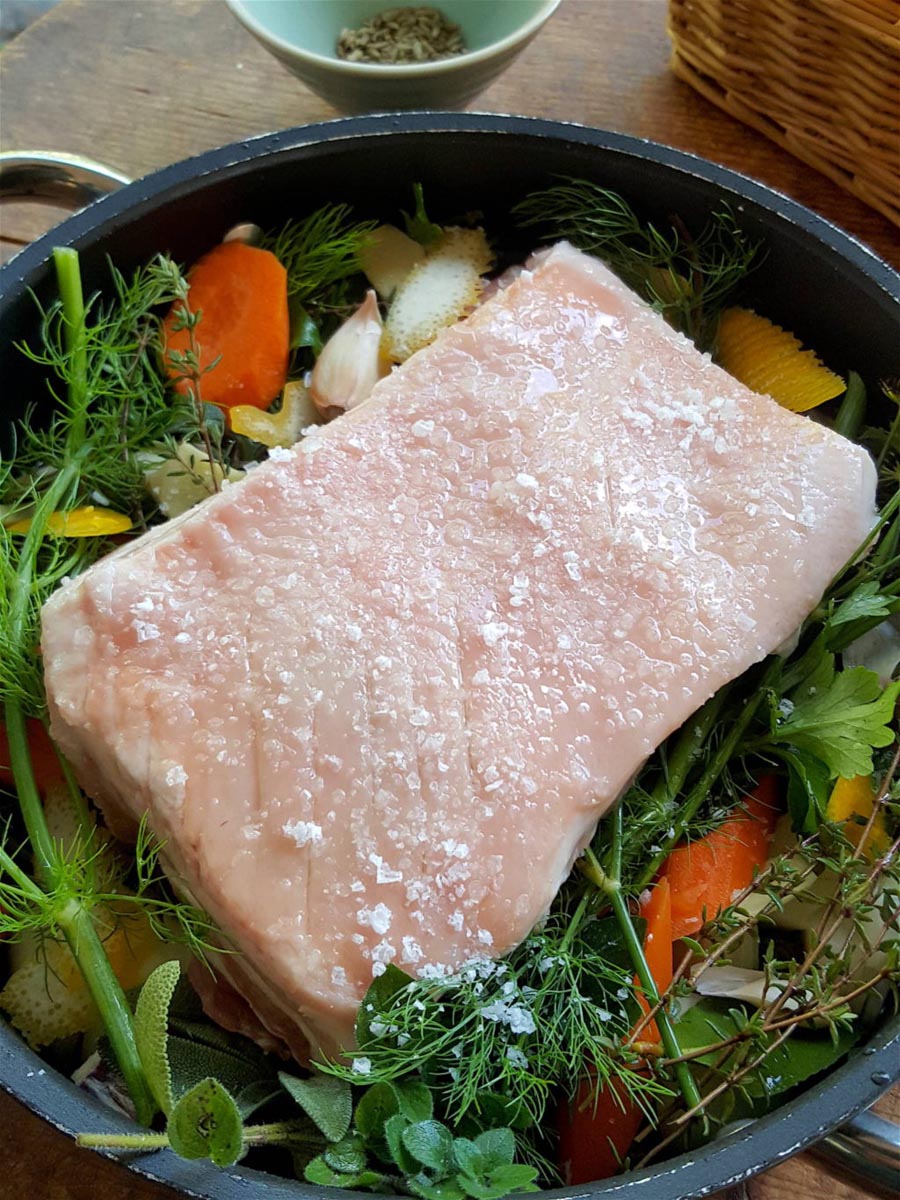 Rub pork skin with oil and salt just prior to cooking, not before

Remove pork joint from packaging once you get home. Pat it dry with kitchen paper then place it on a plate. Cover the pork meat with plastic wrap but leave the cap of skin and fat uncovered; this will help dry it out and produce crisper crackling. Refrigerate. You can store fresh pork joints like this for up to 3 days.

Bring pork joint to room temperature before cooking. As a guide small joints only need 20 minutes, large joints need 30 minutes, but it depends on the temperature in the room. Wipe meat dry again with kitchen paper (wet or moist joints of meat will not crackle).

For large joints, heat a tablespoon or so of oil in a shallow-sided roasting dish over a medium heat (a high-sided dish may trap in some steam and also prevent the heat from reaching the crackling evenly).

Once the oil is hot, and not before, rub the pork skin and fat with oil and sprinkle with plenty of sea salt. Immediately add pork joint to roasting dish, skin and fat uppermost. Let the meat heat for 2-3 minutes, then transfer it to a preheated oven.

For small joints it is not necessary to put the meat into hot oil or cook on a cake rack because they heat up more quickly than a large leg or similar joint of meat.

Once the joint is removed from the oven, let it rest for 7-15 minutes, depending on the size of the joint. Do not cover the crackling. Smaller joints will cool down more quickly than large ones, so remove the crackling and set it aside and keep the joint draped with foil to keep it warm. Large joints will keep their heat if kept in a warmish place such as the oven top (don’t put them in the warmer drawer of an oven as the cracking will soften and the pork may continue cooking).

If you prefer, the excess fat can be scraped from the back of the crackling and discarded. The crackling can be broken apart into rough chunks, or cut into strips with scissors.

If the crackling hasn’t crackled, remove it and grill it briefly, but watch for flare-ups. It will never be as good as oven baked crackling, it will be more brittle, more powdery, not so satisfying, and it can toughen. Still …

This is for a 5-7kg leg of pork to serve 10 or more. First, check shelves are in the right position in the oven to fit the pork. Have the pork at room temperature for one hour before cooking it. Put the meat in a snug-fitting but low-sided roasting dish on top of a rack (I use a cake rack; this ensures the heat can circulate and cook the pork evenly). Preheat oven to 220°C. Roast the meat for 50-60 minutes, or until the fat has started crackling. Lower the heat to 190°C and continue cooking for 2 hours, or until the internal temperature reaches 65°C and the juices run clear; do not baste the crackling.

The internal temperature of the pork leg should be 71°(set by the NZ Pork Industry Board) in the thickest part without touching fat or bones, but take the pork out of the oven when it is around 65°C because it will continue cooking as residual heat works its way to the centre of the meat and the internal temperature continues to rise. Meat thermometers, available from kitchen stores, are inexpensive and take the guess-work out of cooking large joints of meat.

To roast a small joint like a pork rack – and I love this roasted – the same principles apply in preparation.

Get the fat scored but ensure it is not cut through to the meat. Dry it off, oil and salt, hot oven. You don’t need to sit the meat on a rack, nor put it into hot oil to start it cooking, because it is smaller and will start cooking more quickly than a large joint of meat. Get the butcher to chine the bones, which means they are cut to separate them slightly so you can easily cut the joint into cutlets.

For a 1.5kg pork rack, cook for about 1 hour, starting on 220°C, and after 35-40 minutes, by which time crackling should be well underway, lower the heat to 200°C and cook remaining time. If you pierce the meat under the crackling, coming in from the side, trying to reach the centre of the meat, the juices should be the palest rosy colour to almost clear; remember the meat will keep cooking from the residual heat as it stands before you carve it, but it won’t hold its heat for as long as a large leg of pork.

You can roast a small piece of pork belly alongside this for extra crackling.

220°C for 45 minutes, lower heat to 175°C and cook a further 45 minutes until crackling is nicely crackled.

Pork is at its juiciest best when the internal temperature reaches 65°C. If in doubt, buy a small meat thermometer. You’ll be surprised at the difference.

Pork cooked on the bone will have more flavour than boned cuts of pork.

Always rest pork after roasting and slice across the grain with a large sharp knife. 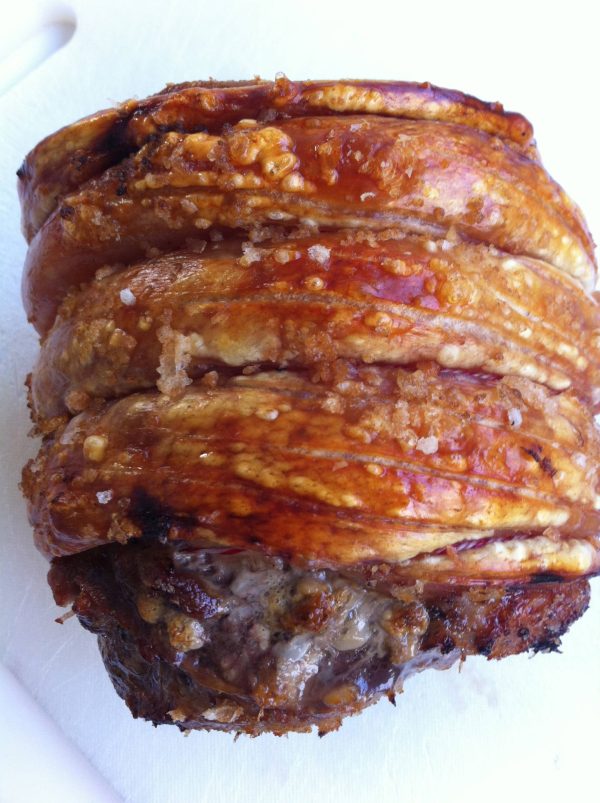 Crackling worth fighting over 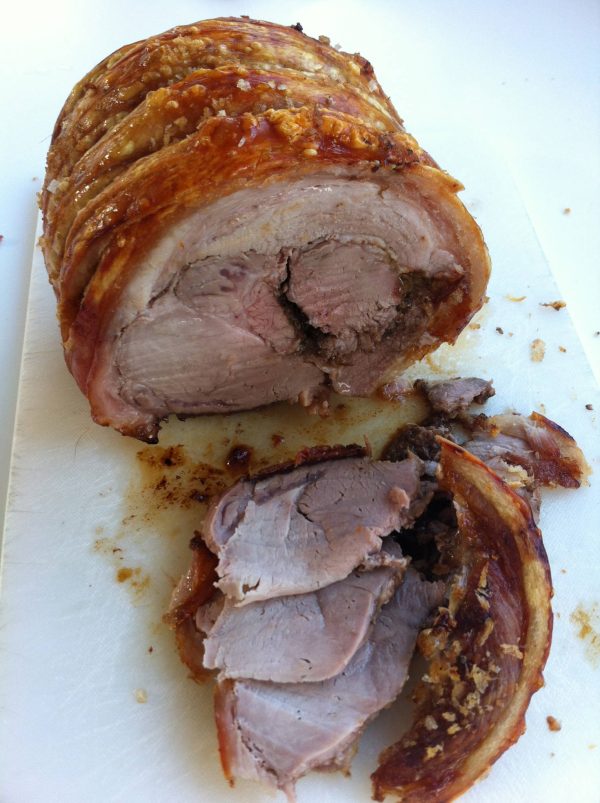 What works with a roast of pork? Gewürztraminer, Riesling, Chardonnay, Rosé, cider and fruity beers.

The sweetest meat is from sows (female pigs). The meat from boars (male pigs), gives off a strong unappetizing smell when it is cooked. Free-range pork is sweeter still.

Fresh pork should be a healthy even pink colour with creamy white coloured fat.

If pork is not packaged with absorbable material, transfer it to a shallow dish and cover with food wrap.

Lean pork contains only a little more total fat than beef (this does not include crackling, of course, which is very high in fat), it’s a good source of iron, zinc, magnesium and phosphorous and is one of the best sources of the B-group vitamins.

But pork carries a bit of baggage. When I grew up the fear of trichinosis (a disease caused by parasitic worms passed on from infected meat) had reached epic proportions. We still ate pork, but to make it supposedly safe to consume it was cooked until it had shriveled to a crisp which made for delicious crackling but leatherish meat. Incidences of trichinosis are rare these days as New Zealand has strict standards for pig farming and importantly, it is illegal to sell home-reared and killed pork or pork caught in the wild, hitherto a likely cause of the spread of trichinosis. The older generation may still prefer to cook pork until it is white, juice-free and dry, but it is not necessary to do so for safe eating. Pork is safe to eat when the meat has a rosy blush to it and the juices are tinged with just a hint of pink – there is a defining moment, but you have to catch it (residual heat will continue cooking the pork, especially in large joints of meat).

To make a thick, sweetly perfumed and richly flavoured apple purée, cook apples with the skin on and include the pips. They provide flavour and pectin which makes the purée thicker and more unctuous. All you need is to add a little knob of butter and a sprinkling of sugar to the cut apples, then cover with a piece of buttered paper and a lid. Cook slowly to develop flavour and to let them soften to a gorgeous golden perfumed fluff. Once the purée is cooked, pass it through a coarse sieve to catch peel and pips. Eat warm or cold, with custard, cream or ice cream, or fold through creamy rice pudding, spread over crêpes, or flavour with a little sage and serve with roast pork.

If you reduce the purée further, quite rapidly for several minutes, with added sugar – and you must stir it constantly – it will become what is known as a marmelade, which is a well-reduced purée of fruit. This can be used in patisserie, tarts, cakes and other desserts. 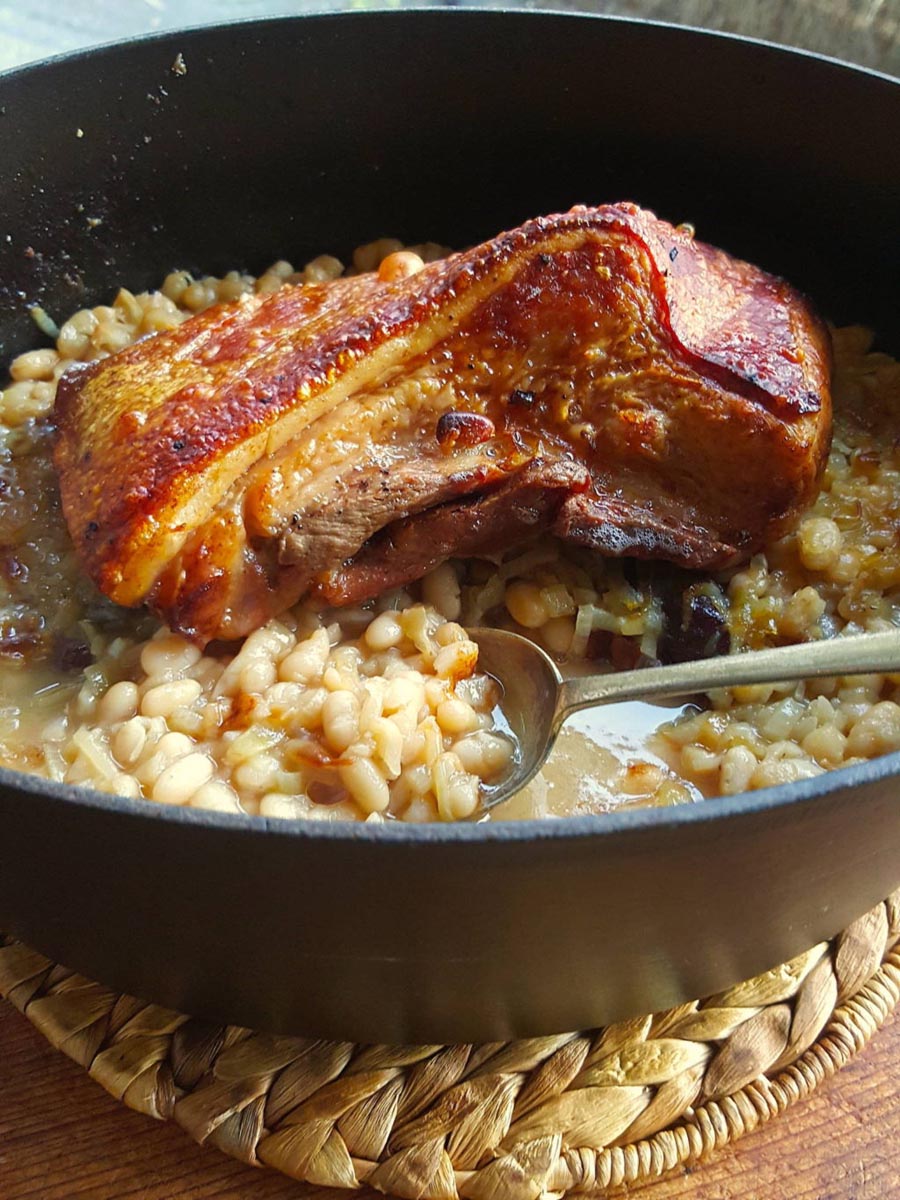 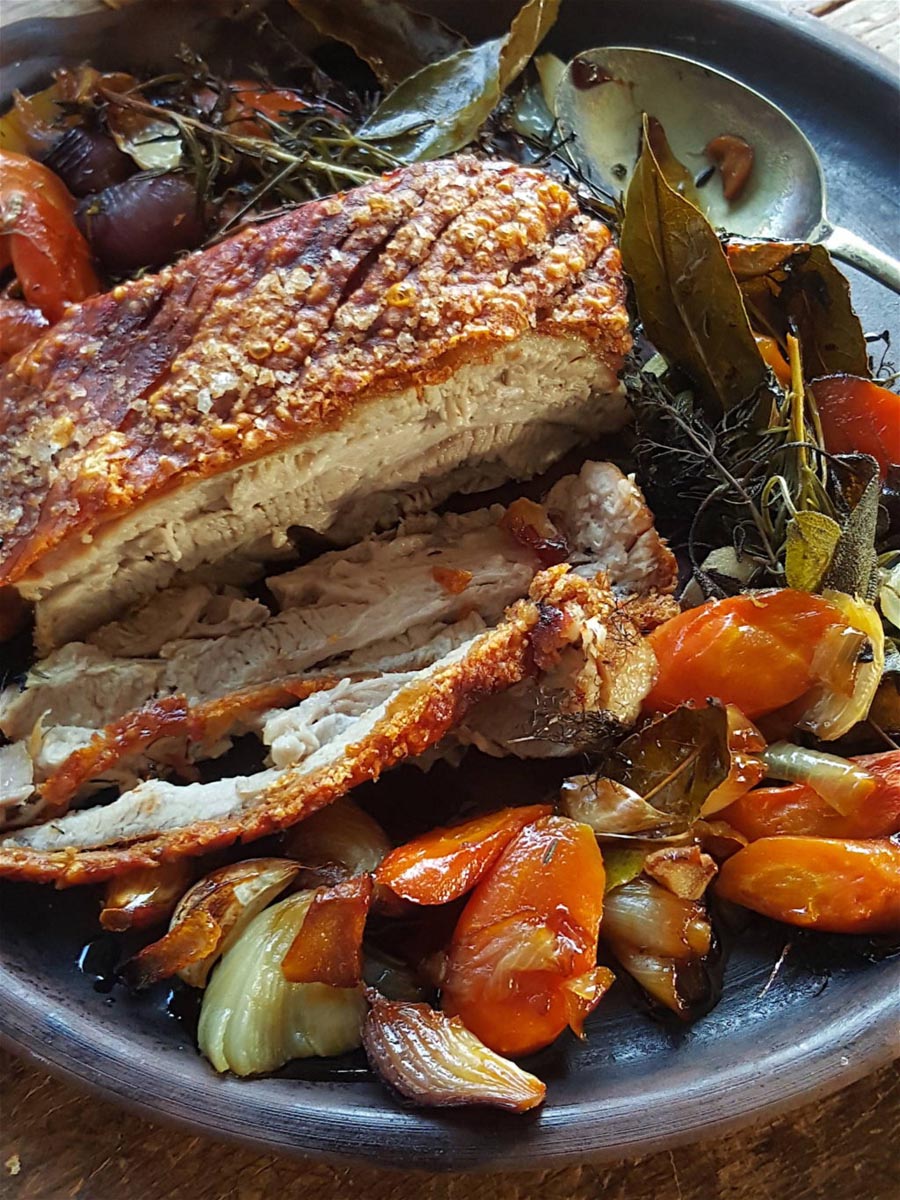