I first met Andrew Hendry – founding co-owner of Coopers Creek Vineyard with wife Cynthia – way back in 1992. I was researching my book The Joy of Good Food and had reached out to wineries for samples to match wines with my recipes. A splendid idea as not only did the food and wine pairing make a useful guide to what goes with what (at the time quite a novel concept), but it ensured I had decent drinking for several months.

Andrew turned up at my place in Northcote Point with a small carton of wine. Choice! I had quite a few winemakers and vineyard owners doing a similar thing over a period of weeks, some with nothing more than a brown paper bag under their arms. I’m not sure what the neighbours thought, and nor did I care. All that lovely wine! But then the reality set in. I had to cook my socks off and try lots of wines with each dish. I think I put on about 5 kg, but I was very very happy. *See what wines I matched with what dishes at end of story.

Looking back on my book, published in 1993, more than a dozen of the wineries I featured are no longer in existence because they closed down, or they sold up or they’ve been swallowed up. Coopers Creek has been a trooper and lasted the distance admirably.

The Huapai based winery was conceived in 1980 by Andrew and Cynthia and American winemaker Randy Weaver. Randy eventually returned to the States and Kim Crawford took over as winemaker for several years. In 1997 Simon Nunns took on the role and he has been at Coopers Creek ever since. It’s been a steady ship traversing the fluctuating fortunes and losses of the New Zealand wine scene ever since, growing from its teeny-weeny micro vineyard stage to a fully-fledged, medium-sized wine company that exports to over 20 countries. It has remained family-owned. 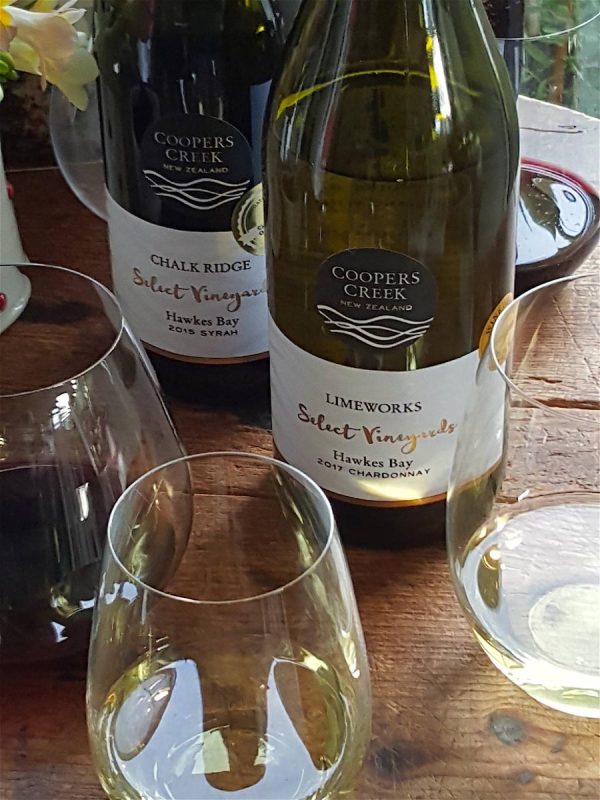 I hadn’t seen Andrew and Cyndy for years, then we recognised each other at a fancy-dress party held on Waiheke this past summer. I just went as myself though some people thought I was in disguise (HaHa!) No, actually I went as famous flapper Zelda Fitzgerald (yes, it was one of ‘those’ dress-up parties where you had to dress up as something starting with a nominated letter; it was Z so there were lots of black and white stripy things). Anyway, that’s when we realised we had a Waiheke connection.

Andrew and Cyndy are now permanent Waiheke Islanders, enjoying the lifestyle and the conservation side of the island.

“We’ve been coming here since 1995,” says Andrew. “We bought a weekend retreat in McIntosh Road Oneroa, way back in 1997, and earlier this year we moved here permanently. The attraction of the property is its secluded setting, uninterrupted sea views and the close proximity to Oneroa village. We both have an interest in preserving and restoring the bush setting and in encouraging the native birdlife. We’ve made numerous plantings of flax, kowhai, coprosma and red guavas (for the keruru) to supplement the mature pohutukawas, puriris and totara. Cyndy is active in reducing the rat and stoat numbers, so we’re not sitting around twiddling our thumbs,” he chuckles.

Daughter Michaela has an interest in poetry, so yep, put two and two together and Coopers Creek is our sponsor for Waiheke’s The Love Jam poetry event coming up this Saturday on Waiheke. Cool! Read about it here. The Love Jam

The photographed wines are:

Described as having, ‘soft tannins, ripe fruit flavours, black pepper and spice, a style that will stand up to richer flavours and accompaniments’. Tonight I will try it with a small nugget of lamb prepared with a dry rub of sea salt, smoked paprika, crushed coriander seeds, crushed garlic and dried mint and see how I get on. The wine has the character to stand up to that lot and might just make a nice tasty mouth-filling collision of oak and smoke, spice and fruit. Mmm. I look forward to it. Chalk Ridge SV Syrah

I didn’t need the wine notes to tell me what to serve with this. Hazelnutty, a squeeze of lemon, a slosh of cream … pan-fried fish fillets in browning butter finished with chopped roasted hazelnuts, slivers of preserved lemon and a swirl of crème fraiche. Lick-the-platter-clean awesome! A chicken breast treated in a similar manner will also come up trumps. Delicious. Limeworks SV Chardonnay

The Joy of Good Food

Here’s what I matched with Coopers Creek wines way back in 1994. It’s interesting to note that Gewürztraminer, always a hard wine-sell, has dropped way down in the pecking order, as have sweet dessert wines. Still for what it’s worth …

What is Fumé Blanc? It’s a bit of smoke and mirrors! The fumé refers to the smoke-like fog hanging over the vines in the Loire valley, France. When the late Californian wine maker Robert Mondavi wanted to sell a decent batch of Sauvignon Blanc he’d made, he knew it would be difficult because Sauvignon Blanc at that time was a bit sweet and pretty shabby, so he dry-fermented the wine and aged it in oak barrels and called it Fumé Blanc. It was a roaring success.

Fumé Blanc is simply Sauvignon Blanc with a fancy-pants name, though it does indicate that it is a dry style. Hey! I’m no wine-expert! This is culled straight off the net.

Yep, still a good idea. There’s something about the spicy floral nose and taste of an assertive Gewurzt that hits the right spot with leeks and nutmeg in this quiche. You’ll be hard-pushed to find Gewürztraminer these days as it has been replaced by other more drinkable styles.

Crisp, clean, citrussy with its hint of toastiness harmonises perfectly with the ham and buttery well browned pastry. That’s what I said! Haven’t made this pie since then, lovely though it is (make stock, make pastry, cook pie, double-bake pie … life seems too short!).

I must have been keen on this wine because it is not everyone’s favourite wine style, yet it pops up again here with this delicious family favourite. I described the wine as luscious and fragrant. Bang on.

Can’t fail with this combo, but dessert wines or ‘stickies’ seemed to have dropped out of favour (the wine world is very faddish – just like food). Coopers Creek now make a dessert wine with Chardonnay grapes.

I presume this was Gisborne Chardonnay. It would still rock your socks off as a wine match. Try it on Christmas day, if not before.

*If you are interested in a copy of Joy of Good Food ($10.00, but be aware there are no photographs), drop me a line [email protected]    or see me at Ostend Market, Waiheke, most Saturdays (not the 25th August as I am doing the food for the poetry Love Jam).

Pickled Vege
A little pickle here, a little pickle there … can add interest to burgers, toasted cheese sandwiches, barbecued chicken and steak, or flat-tasting couscous, burghul, quinoa or freekeh. It’s pretty banging … Read more
Scones – how much should you pay for one?
Hobby horse: Make your own at a fraction of the price. Read more
How to carve a chicken
Do it like a pro! Read more