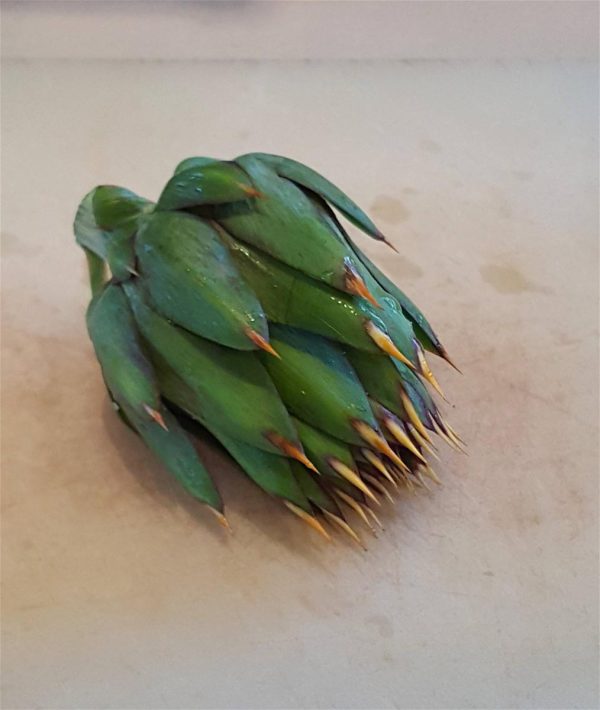 Artichokes – how to deal to them

The globe artichoke is a type of thistle, but we eat the buds of the plant before the flowers bloom. The flower buds are edible at various stages of their growth but are better picked and eaten while they are young, and certainly before they start to open up.

If artichoke buds are left on the plant, the thistles continue growing and burst open into a striking flower. They can be dried and used in flower arrangements. But this column is about eating!

The artichoke bud consists of the stalk, the petals which sometimes have small spikes on their tips, the choke and the heart or ‘fond’. The choke is a collection of furry fibre which forms in the centre of the artichoke. It cannot be eaten no matter how fresh the artichoke nor how long it is cooked – try and eat it and you may well choke! Most of the outer leaves (petals) are too tough to eat as well, although each leaf has a succulent morsel at the base where it is attached to the artichoke, and you can prise this tasty nugget off with your teeth.

For all their beauty and mystique, once you understand what has to be scrapped or salvaged, they’re reasonably easy to prepare. The trick is to be absolutely ruthless. Chop off and discard anything that is inedible. 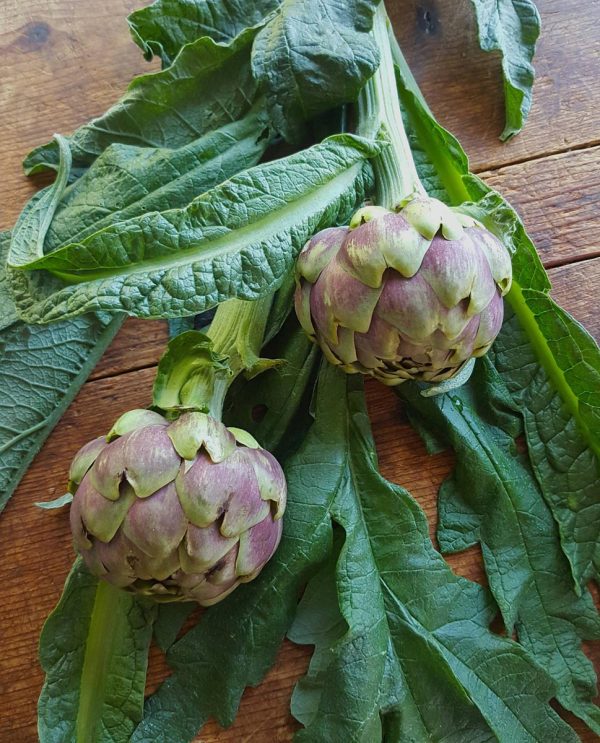 Check other columns on artichokes in Shared Kitchen

How to prepare an artichoke – it’s easy!

The classic French way is to present cooked artichokes whole, petals (leaves) uppermost, served hot with a Hollandaise sauce or cold with vinaigrette.

To prepare, trim off the top third of the leaves – it’s inedible anyway, so don’t cry at the waste! Trim the stalk. It’s easier to remove the choke from a cooked artichoke than from a raw one, so if you are serving artichokes cold, you can cook them like this and remove the choke after cooking. 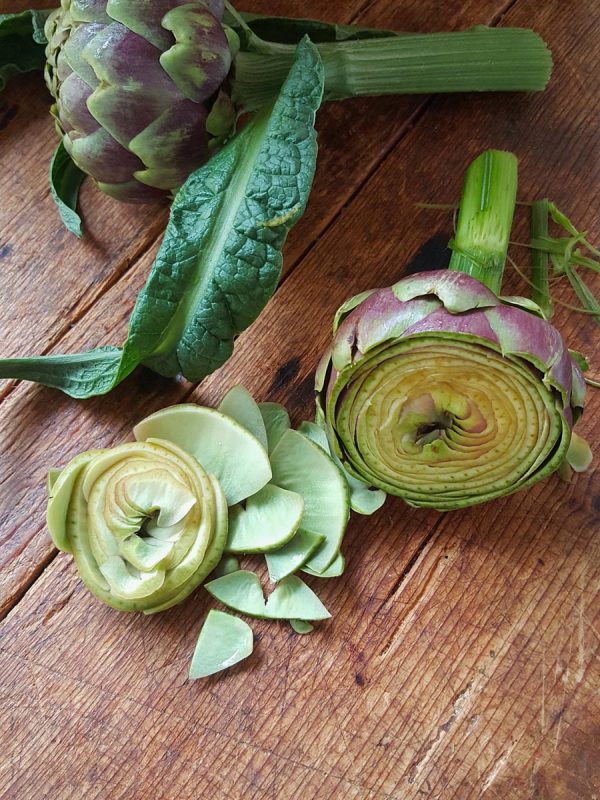 If you are serving the artichokes hot, jiggle and wiggle the leaves in the centre of the artichoke, opening it out, until you can pull out the small pale mauve-tinged leaves. Press the soft yellowish leaves away from the centre until a cavity is formed and the choke revealed. The choke is a collection of fibrous hairs, which should be totally scraped out as it is inedible, even after cooking. Use a pointed teaspoon to remove it, but take care to remove only the hairy fibre, because directly below this is the meaty base of the artichoke (referred to as the fond or heart)). The artichoke is then ready for seasoning or stuffing.

No matter how you prepare them, drop them into a bowl of lemon water (acidulated water) as they are prepared to help slow discolouration. It’s also wise to wear thin food preparation gloves to prevent your hands being stained.

The artichokes are then steamed until tender. Put them petals facing up in a saucepan with a little lemon water or white wine to create steam, season with a little salt, cover with a lid and cook them gently for 15-20 minutes, until tender. Be careful not to overcook them – cook just until a skewer can pass through the thickest part with little resistance. During steaming, lift the lid on the saucepan only when necessary and when you do so, quickly invert it, so that the water condensed on the inside does not drip onto the artichokes; if you pour the water from the lid back onto them, they’ll fill up with water and become water-logged. If the artichokes are to be served ho, drain them briefly on paper towels, then serve immediately.

If you have not removed the chokes, let the artichokes cool, turning them upside down on a board to drain. Once they are cool, jiggle the central mauve-tinged leaves a little until they loosen, then pluck them out and discard. Below them is the choke which you must scrape out carefully with a pointy teaspoon. Take heed of the word carefully; if you’re too vigorous you’ll scrape away some of the heart, which is the prized part of the artichoke.

To eat, hot or cold, you break off each leaf and dunk the succulent end in the sauce or dressing and nibble it, then discard the nibbled leaf in a separate bowl. You’ll find the leaves become increasingly tender and you’ll eventually strike some that are totally edible. Once all the leaves have been nibbled or eaten you’ll be left with the artichoke heart. This you eat with a knife and fork (finger bowls with lemon wedges are handy for washing fingers before swapping to cutlery).

In the classic Roman dish carciofi alla Romana, the artichokes are served bottoms-up. Choose artichokes with long stalks and remove the chokes before cooking them.

Prepare as described in French style above, but do not trim off the stalks as they are part of the dish. Trim the end of the stalk and peel away the outside fibre – the stalks, although marginally stronger in taste, become nicely tender after cooking.

When all the artichokes are prepared, shake them to remove excess water then rub with generous amounts of chopped garlic and mint, extra virgin olive oil, lemon juice, salt and pepper (you can mix this together to make a dressing if you prefer). Put artichokes in a pot, stalks facing up – and that’s the way they’re served – add a spoonful or two of water to the pot and another drizzle of oil, cover the pan with a lid and steam them gently for 15-20 minutes, until tender. Be careful not to overcook them – cook just until a skewer can pass through the thickest part with little resistance. Serve them in a bowl stems up. They look magnificent!

To eat, start by peeling off the leaves and nibbling on the morsel of tender flesh at the base of each leaf (the rest of the leaf is discarded as it is too fibrous to eat). Carry on until you get to the more tender leaves, which can be eaten whole. Then you’ll be left with the stem attached to the heart. It’s easier to eat this with a knife and fork. 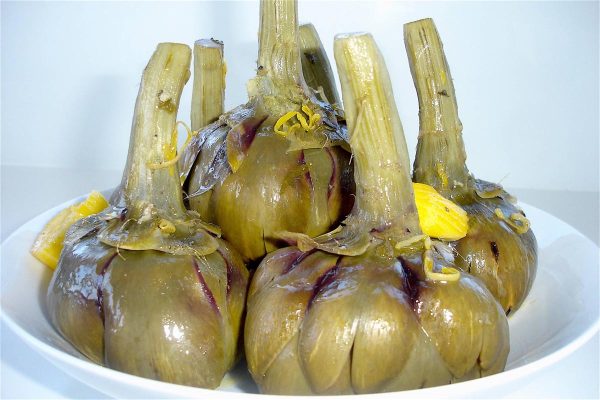 These carciofi, a frequent sight in the windows of restaurants and trattorie in Rome throughout spring, can be served hottish or at room temperature, but they’re never served stone cold from the fridge. A little bread for dunking, and a little glass of wine on the side…oh, and here’s a controversy: If you’re umami sensitive you’ll find red wine with artichokes a terrible combination. (Umami is a Japanese word first used some 1200 years ago to describe a savouriness that naturally occurs in some cheeses, some meats and chicken, kelp, lots of things from the sea, fresh tomato juice and many types of fungi. Only 20% of the western population have the molecule in their tongue that can help them taste umami.) The wine will taste metallic, and bitter. I used to wonder why my Italian family can all enjoy red wine and artichokes, but I can’t. The simple answer is that I am umami-sensitive (artichokes are a naturally high umami food) and my Italian family are not. Artichokes have the opposite effect on water, making it taste sweet. Try the experiment yourself and see if you can enjoy red wine with artichokes, and whether you are umami-sensitive. Another way of dealing with it is to have a sip of water, which will taste sweet, before a sip of red wine.

I’ve only described two ways of dealing with artichokes – keeping them whole, and cooking with choke in, or removing it first, and cooking them sitting on their bases, or stems up – but they can also be cut into slivers and sautéed gently in olive oil, then splashed with a little wine and used in a frittata or pasta sauce (or just eaten on their own with bread and wine).

Once the choke is removed from a raw trimmed artichoke it can be sliced in half, rubbed with oil and seasonings and baked or barbecued.

If you want to bake or barbecue artichokes, or slice them for frying, the fastest way to prepare them is to cut them in half and scoop out the choke because it’s more visible and easier to remove. Snap off the tough outer leaves first, then trim off the top third of the leaves, slice artichokes in half and gently scrape away the choke with a pointed teaspoon. 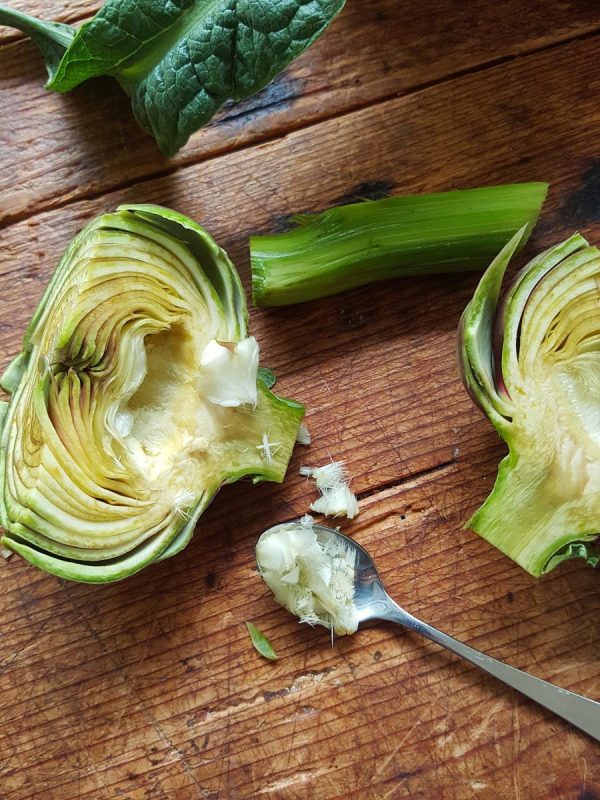 You must remove every fibre of the choke, because if you eat any of the fibres, you may well choke!

If you have immature artichoke buds, about the size of an egg, they most likely will not yet have formed a choke, then can be trimmed, halved, doused with oil and barbecued or grilled.

Very fresh smaller artichokes can also be eaten raw. Trim the tops and stems as described, cut in half, then go back over each one and trim away and tough stem or leaves, keeping them dunked in lemon water as they are prepared. You need to be ruthless – try a piece and if it is tough, keep trimming. Have ready a lemony vinaigrette with garlic and mustard. Dry off the trimmed artichoke halves and slice finely, then add to the bowl of vinaigrette. Once they are mixed with the vinaigrette, they will stop discolouring.

Artichokes will store for several days in the refrigerator, nonetheless you want to buy them as fresh as possible. Look for fresh green leaves with no sign of withering or browning. The buds should be tightly closed, not opening up, and they should feel heavy for their size.

Artichokes like herbs and garlic, mustard and pepper, butter and cream, salty meats like prosciutto and ham, anchovies, olives and onions, and tomatoes and lemons, among other things, and mix happily with other green vegetables such as peas and broad beans, fennel and asparagus. They also work a treat in baked, stewed and roasted meat dishes, and are utterly delicious crumbed and fried, or prepared alla giudea (Roman Jewish style), fried whole in olive oil until they open up like flowers, turning crisp and golden. The latter is the perfect dish to try in a Roman restaurant in spring, leaving all the splattering to the restaurant kitchen (yes, they spit a lot!).

Watch out for sharp pointy parts on artichokes, usually found on the tips of the outer leaves, sometimes on the inner leaves around the choke, and on the stems.

If you lick your fingers after touching artichokes you’ll be amazed at the incredibly bitter taste. To minimize this, and to protect against staining, wear food preparation gloves when preparing artichokes.

Lemon helps prevent artichokes from discolouring. Add some juice to the water they are soaked in, (this is called acidulated water) or rub cut surfaces with a piece of cut lemon.

And don’t throw away the stems – they’re edible, too, although they have an earthier taste than the leaves.

Chorizo & Baby Potato Tapas
Scrumptious little morsels to add to a tapas feast. Read more
Black Garlic – have you tried it yet?
The health benefits of garlic are ramped up several notches in black garlic. You've got to read this... Read more
Summer Cooking Classes on Waiheke – Just a few January days left!
Come and cook with us on Waiheke – and enjoy a sherry tasting at the fabulous Casita Miro. Read more