Tamarillos, an oval or egg-shaped fruit shaped like a plum tomato, with either a rounded or pointed tip, are native to Central and South America but came to New Zealand via Asia in the 1800s. New Zealand was the first country to grow tamarillos commercially. The red strain, our most popular variety, was developed by an Auckland nurseryman from seed brought in from South America. Along with red fruit, amber, gold and purple skinned fruit is also available, with amber fruit being the sweetest.

When I grew up tamarillos were called tree tomatoes, which is no strange coincidence as they do belong to the same plant family as tomatoes (along with eggplants, capsicums and potatoes). In 1967 New Zealand growers wanted to differentiate between common tomatoes and were after an exotic name to help market them. The Maori word tama, meaning leadership, was combined with rillo, probably taken from Amarillo (Spanish for yellow), to create the new name of tamarillo.

Tamarillos are loaded with antioxidants, Vitamins and minerals. The high Vitamin C content ensures they are popular through the winter months­ (the season runs from April through to October). They’re a great source of Vitamin A and B6, are high in potassium, and also contain Vitamin E and Thiamine. So get eating them!

The skin of tamarillos is bitter but it’s easily removed in the same way you remove the skin of a tomato. Drop tamarillos into a saucepan of boiling water, turn off the heat, leave for 30 seconds, then remove a tamarillo to check whether it can be peeled with ease. If the tamarillos are ready, drain and transfer to a bowl of cold water; if the skin is not easily removed, leave them in the hot water for an extra 30 seconds or so. When cool enough to handle, peel tamarillos and remove stalks.

It is best to keep tamarillos away from bananas, apples and citrus, which all give off ethylene gas, unless you want to speed up the ripening process. Tamarillos are perishable, so use within about a week of purchase, or transfer to the fridge where they will keep for 2-3 weeks. They also freeze well. Peel first and either freeze fruit whole, removing the stalks, or chop or purée the flesh.

Tamarillos are generally improved with something sweet such as brown sugar, honey or maple syrup. For a simple preparation, cut tamarillos in half and scoop out flesh. Chop roughly. Put tamarillo flesh in a bowl and sprinkle generously with brown sugar. Cover and refrigerate overnight. The next morning the fruit will be bathed in a gorgeous crimson juice. Serve on porridge or with vanilla ice cream, or use in place of kiwifruit on a pavlova, and let all the gorgeous red juices ooze through the pillows of whipped cream. 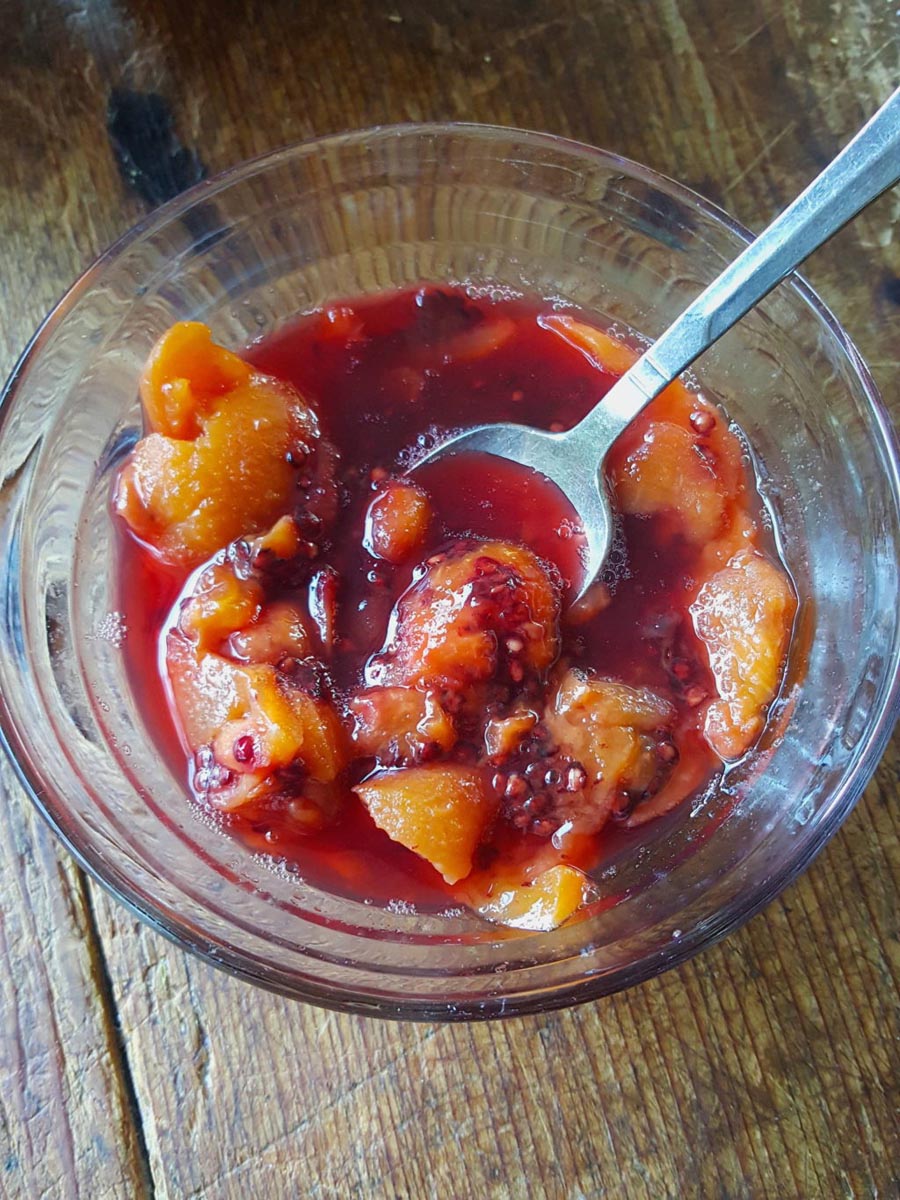 Sugared tamarillos can be layered in glasses with yoghurt and muesli for a healthy start to the day (well, there is the small matter of the brown sugar!). Tamarillo verrine 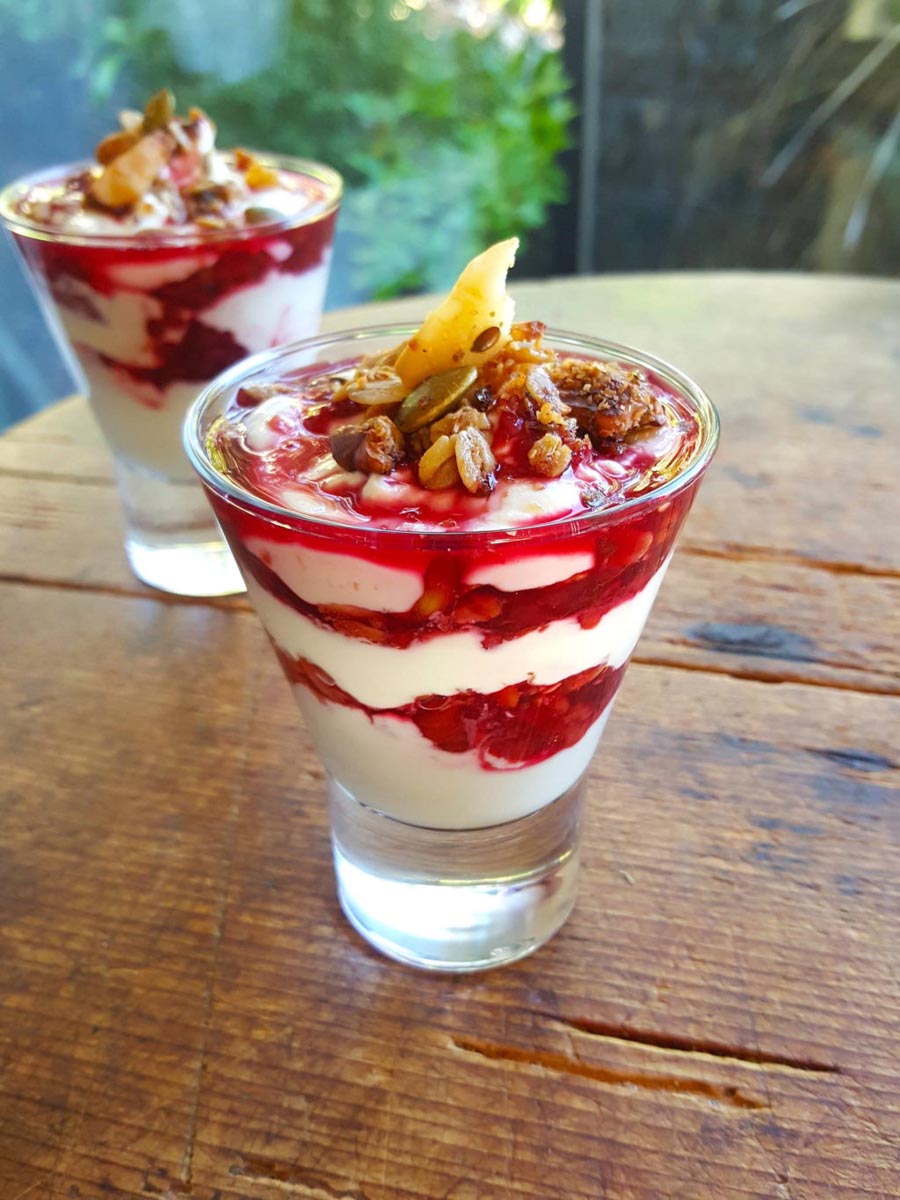 They make a great crumble with apple. Add desiccated coconut and chopped hazelnuts to the topping, and serve with coconut ice cream.

To poach tamarillos, make a syrup by dissolving ½ cup soft brown sugar in 1 cup each red wine and water and cooking gently for 5 minutes. Add peeled tamarillos (leave stalks on) and poach for 15 minutes. Cool in the syrup. Before serving, transfer tamarillos to a bowl. Reduce syrup by half over medium heat. Pour over tamarillos and serve warm or at room temperature.

While sweetening tamarillos makes them more palatable, they’re a different beast altogether when used in savoury dishes. Think of them like an acidic tomato. They can be roasted around meat, make a fabulous chutney and an interesting salsa, and are great in casseroles, particularly beef, pork, chicken, duck and lamb. Beef bourguignon with tamarillos? I know, I know, sounds weird, but take a deep breath and just try it. Use your favourite recipe, adding peeled and halved tamarillos for the final 30 minutes’ cooking.

Turn diced tamarillos into a biting salsa with green chilli, a pinch of sugar, grated lemon zest, sultanas, coriander and mint and serve with lamb. Or try this version with kaffir lime leaves and yoghurt.  Tamarillo Salsa

Tamarillo chutney is great on crackers with cheese or tomatoes, with cold meats, with barbecued lamb cutlets or roasted pork, or with crispy roast duck. Also try it in a BLT with avocado. 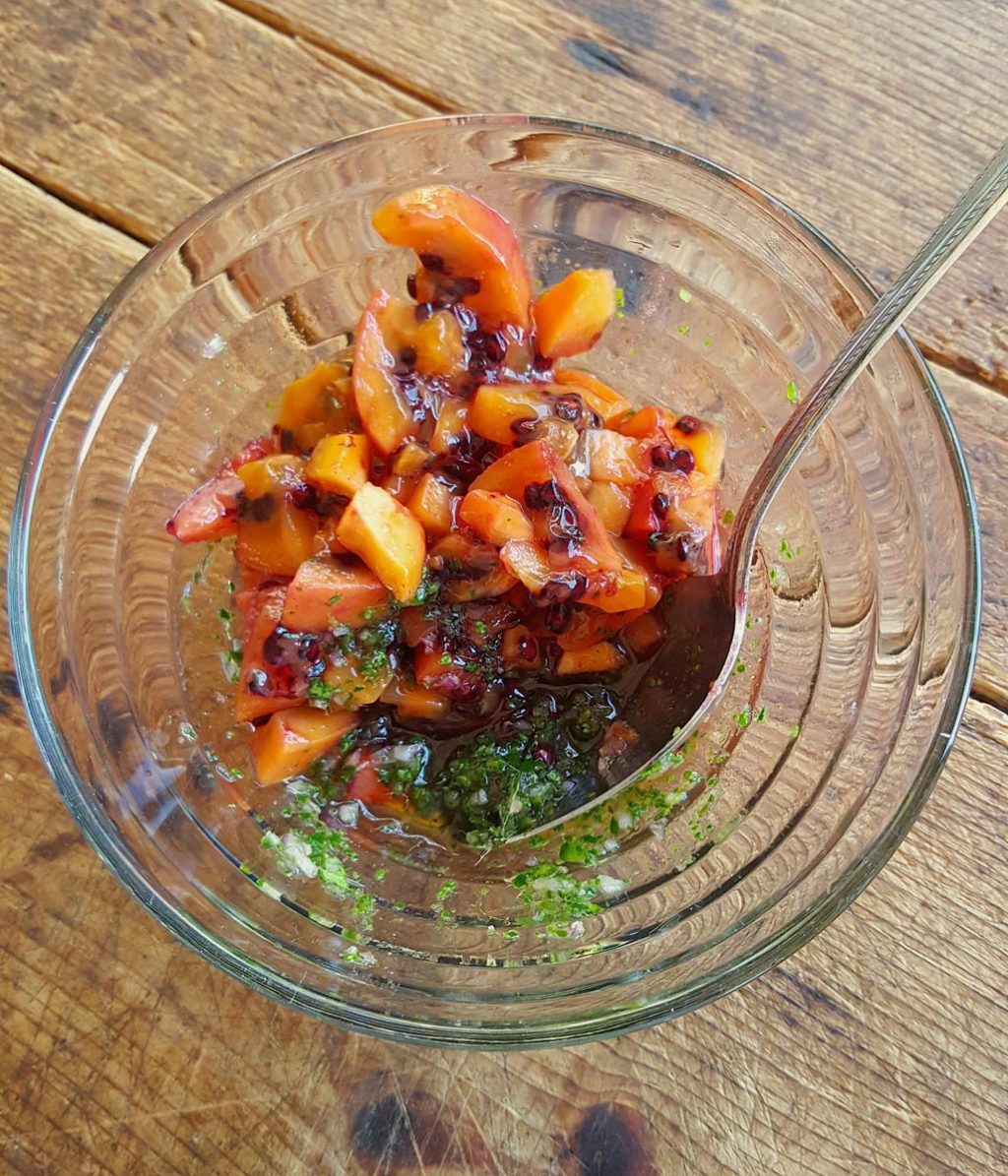