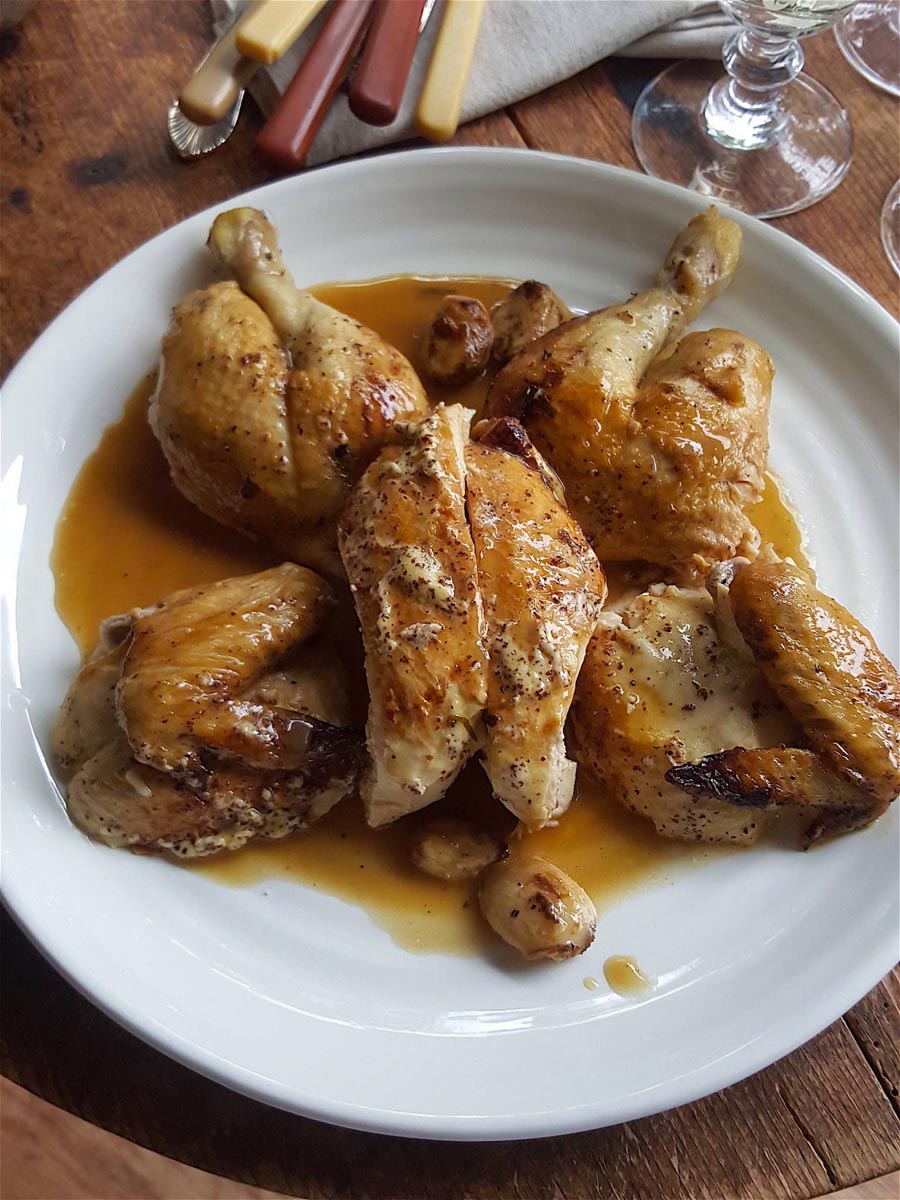 Easy when you know how.

Cook a Pot Roasted Chicken, or a French Roasted Chicken according to chosen recipe. A chicken is ready when the juices run clear when pierced with a skewer (check the thickest part of the thigh). You can also check by wiggling the leg; it should appear loose at the ball and socket joint next to the cavity. Let the chicken rest at room temperature still in the tin or casserole for 15 minutes before carving into joints.

Tilt the chicken and let juices run out of the cavity into the roasting tin or casserole. Transfer chicken to a board. To carve, start with the parson’s nose facing you (that’s the opposite end to the cavity opening). Undo the trussing string that has held the cavity closed and helped keep the wings tucked into the sides of the chicken. You want a medium-sized knife with a thinnish blade. The knife in the photograph is actually small but if I put the right size knife in the shot it looks like a cleaver! Remove the chicken drums and wings first. Gently push the knife between the carcass and the leg and push the leg away from the carcass with the knife. If the chicken is beautifully cooked it will easily peel away. Locate the ball and socket joint which attaches the leg to the carcass and stick the knife in the middle of it to sever the ball from the socket. The leg can then easily be cut from the carcass. Repeat with the other leg. The leg joint can be cut into two pieces – the drumstick and thigh meat – if you want extra portions. 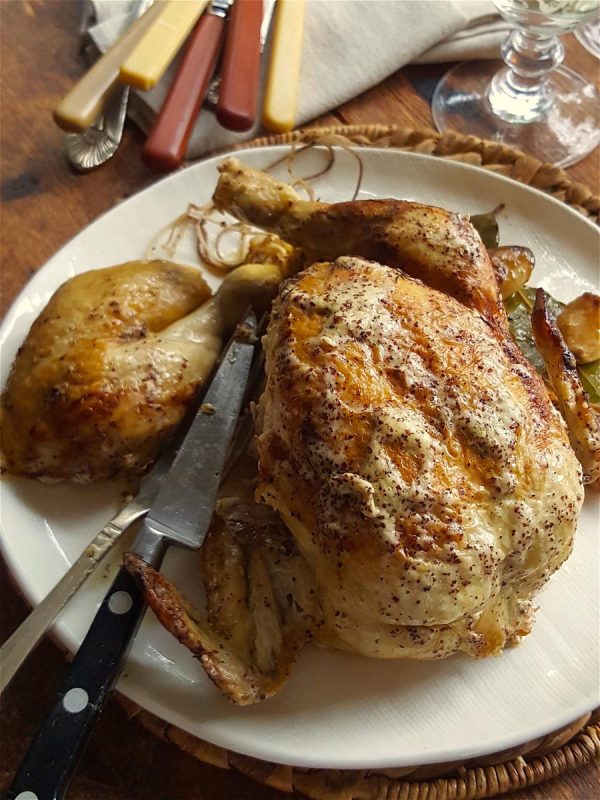 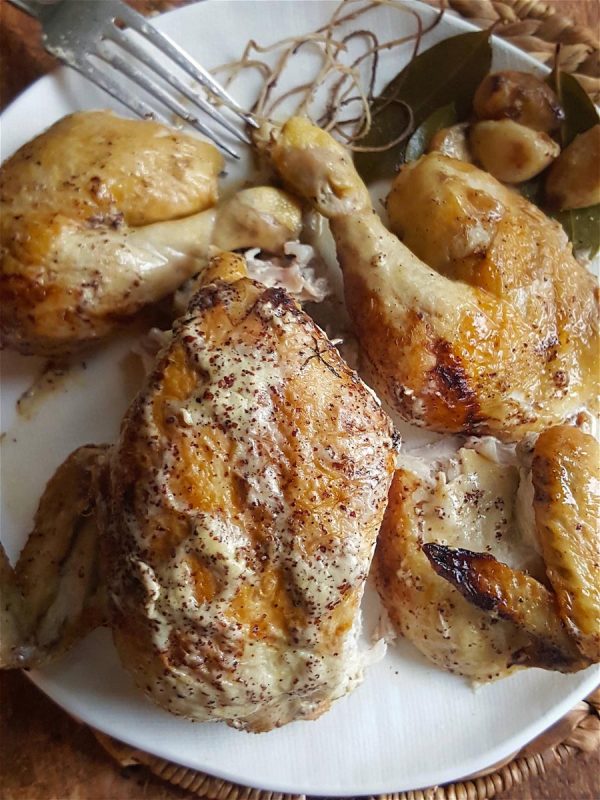 Turn the board around. You will notice the breast where the legs have been removed is shaped like an upturned letter V. Now you cut off the wing joints, again locating the ball and socket joint and cutting in between it to sever the joint from the carcass, BUT you cut it on an angle including some of the breast with it so it makes a more meaty joint, equivalent to the other joints. Now you will see that the chicken is cut again like the letter V, and now the carcass looks like a diamond. Great work! 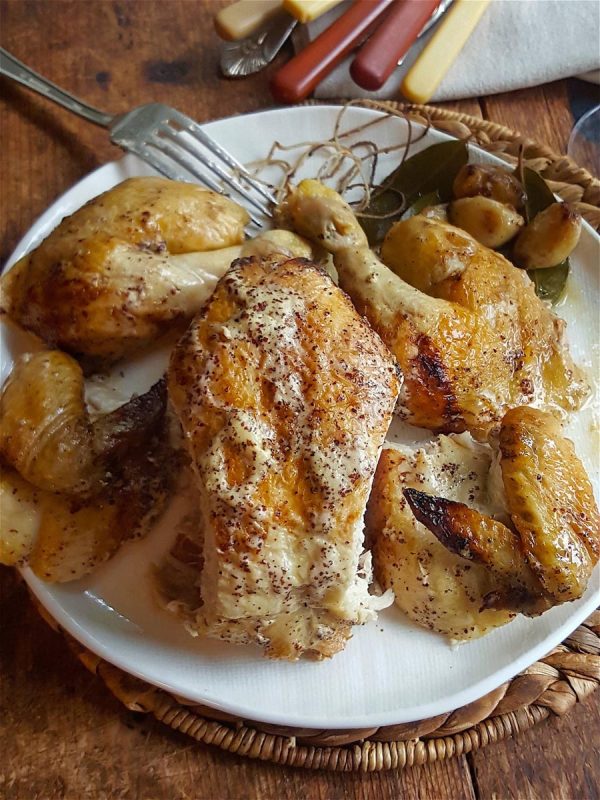 Next, you want to remove the breasts. Work the knife as close to the breastbone as you can, cutting along one side of it, then lever the flesh away from breastbone and carcass and free the breast in one piece. Repeat with the other side. 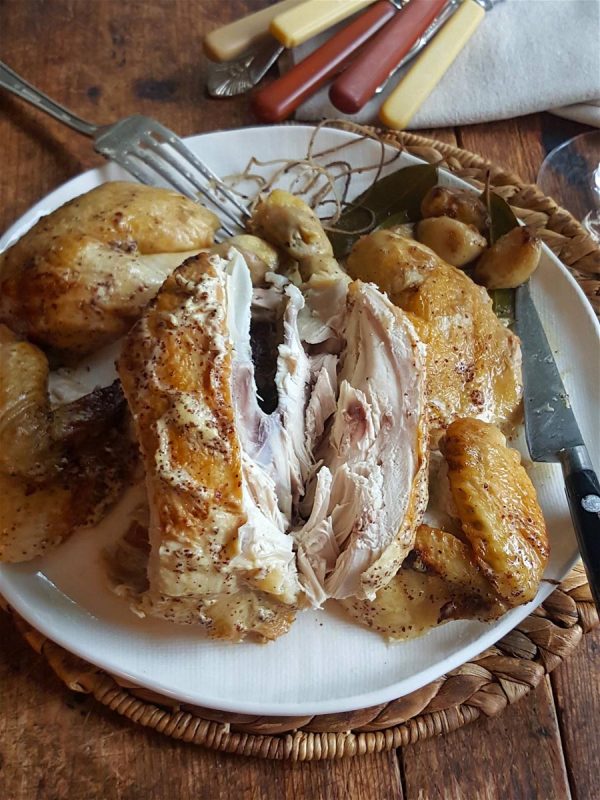 Then clean up the carcass, scraping off all the yummy morsels still attached to the carcass, especially the two little lumpy bits called the oysters nestled on the back side of the chicken (cook’s perk!). The carcass can be used for chicken stock, and if it doesn’t suit to do that within a day or two, freeze it for later.

Arrange the chicken joints on a warmed platter – I have a few garlic cloves in the picture – and spoon over any jus. 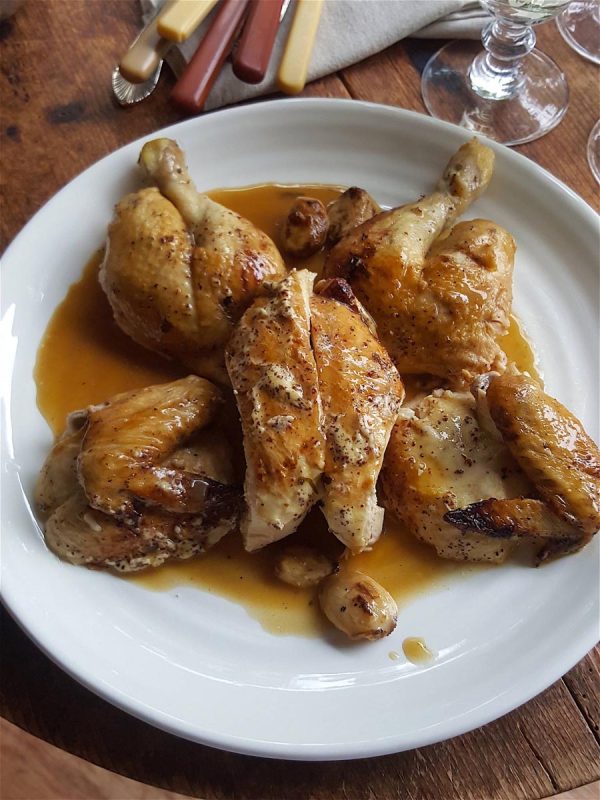 Cordis Hotel enters a new era
Cordis Hotels & Resorts is the new top-drawer global brand of the Langham Hospitality Group. Lucky for Auckland being one of the first in the group to have a hotel elevated to this level.
Read more
Fennel – fancy things up with feathery leaves or pollen
If I could resist harvesting my fennel bulbs, they would have babies, slim fennel-ettes would start forming that I could pluck out leaving the plant to continue growing and forming more of the same. But I can't, of course.
Read more
Creamy Parsnip Purée
Most cooks know that you can’t purée potatoes in a food processor unless you want to make glue, but blessed be parsnips. Oh yeah, they turn into a fluffy whipped dream. Read more