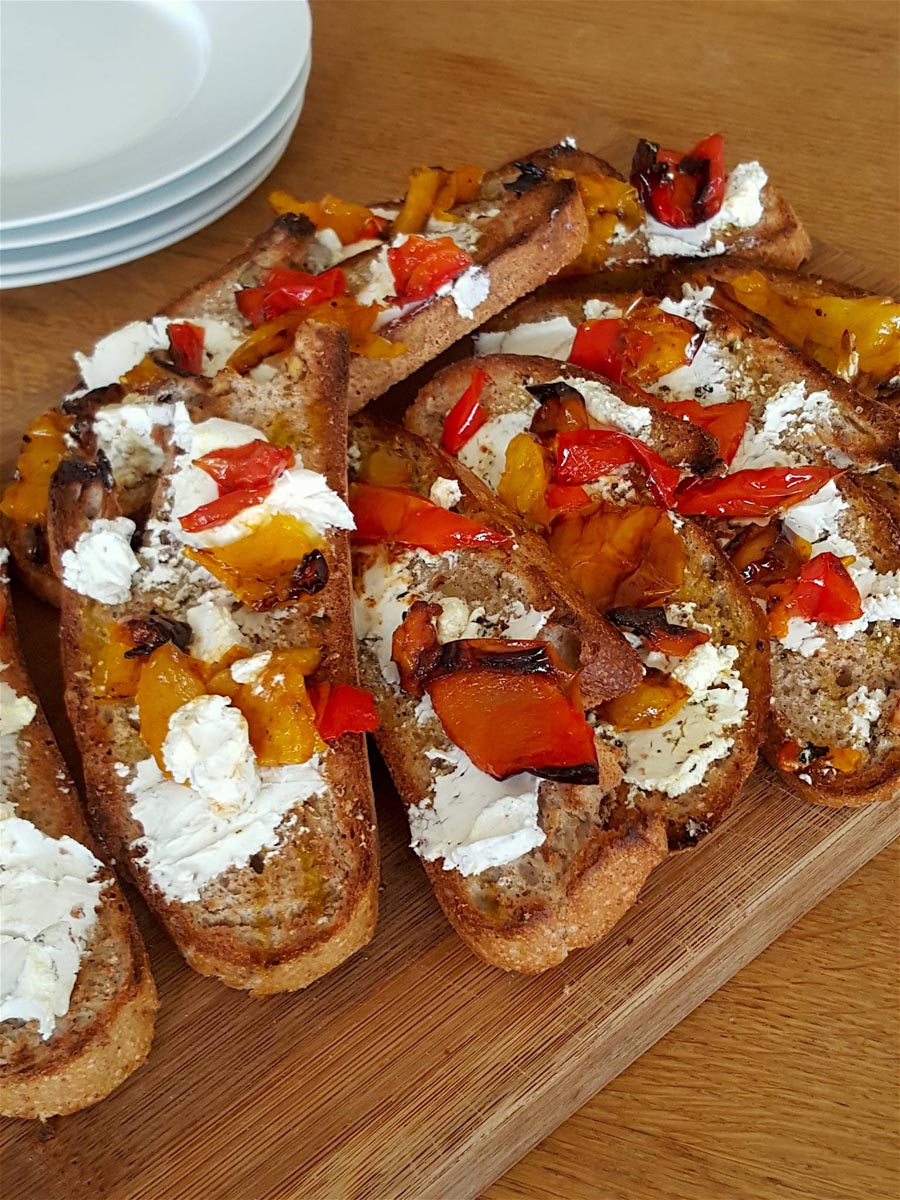 Make as many as you like! (The more the merrier!)

1 First, get on to the peppers and get them lit. You can do these hours ahead, then it’s easy to put these together. Cut peppers in half, remove cores and seeds and cut into chunks. You can char-grill the peppers on a heated barbecue hot plate (griddle), first tossing them with a little oil and seasoning, or cook them in a pan (skillet) as follows. Either way is the goods.
Heat 2 tablespoons extra virgin olive oil in a medium frying pan (skillet) and when it is hot, add the peppers. Cook for about 10 minutes, turning peppers, until they are just starting to wilt and take on some colour.

2 Another idea is to char the peppers whole and to remove the charred skins after. You put the peppers right in the flames of a gas element or over a barbecue grill and cook until blackened. Spin them around a couple of times with tongs so they get completely blackened. Whip them of the heat and transfer to a plate. I cover them with paper towels and leave them until cool because they steam a bit and are easier to peel. Pick off all the blackened skin – use the paper towels to do it – then cut pepper in half and remove cores and seeds. Chop into chunks and they’re good to go. (For more information go to Char-grilling Peppers). And like with the skillet, save that juice – it’s a motherload of flavour goodness.

3 When you are getting ready to serve, slice the bread and grill it – if I’m in a hurry (usually running late for footy) I just whack it in the toaster. If you want to give the crostini more punch, rub the toasted bread with the clove of garlic – the coarse crumb of the bread picks up little bits of garlic and gives the crostini a hot bite. See above – don’t flick the kick – the bite from the garlic is a winner.

4 Next spread with goat’s cheese, not too much because I’m a poor bugger who can’t manage his finances, but also as you don’t want it overpowering the other elements. Arrange on a board and top with the peppers. The juices are pretty tasty so pour those over too if you weren’t foolish enough to toss ‘em. Sprinkle with flaky sea salt if you have it – but any salt will do – and grind on plenty of pepper, and drizzle with oil. It’s got to be good oil otherwise there’s no point. Castrol is good for your car, plain olive oil is good for cooking and extra virgin is good for a Friday night.
Add a few drops of balsamic vinegar if you like, and if you’ve got a ma like mine who comes bearing gifts of homemade dukkah, sprinkle the hell out of it. Gobble up!