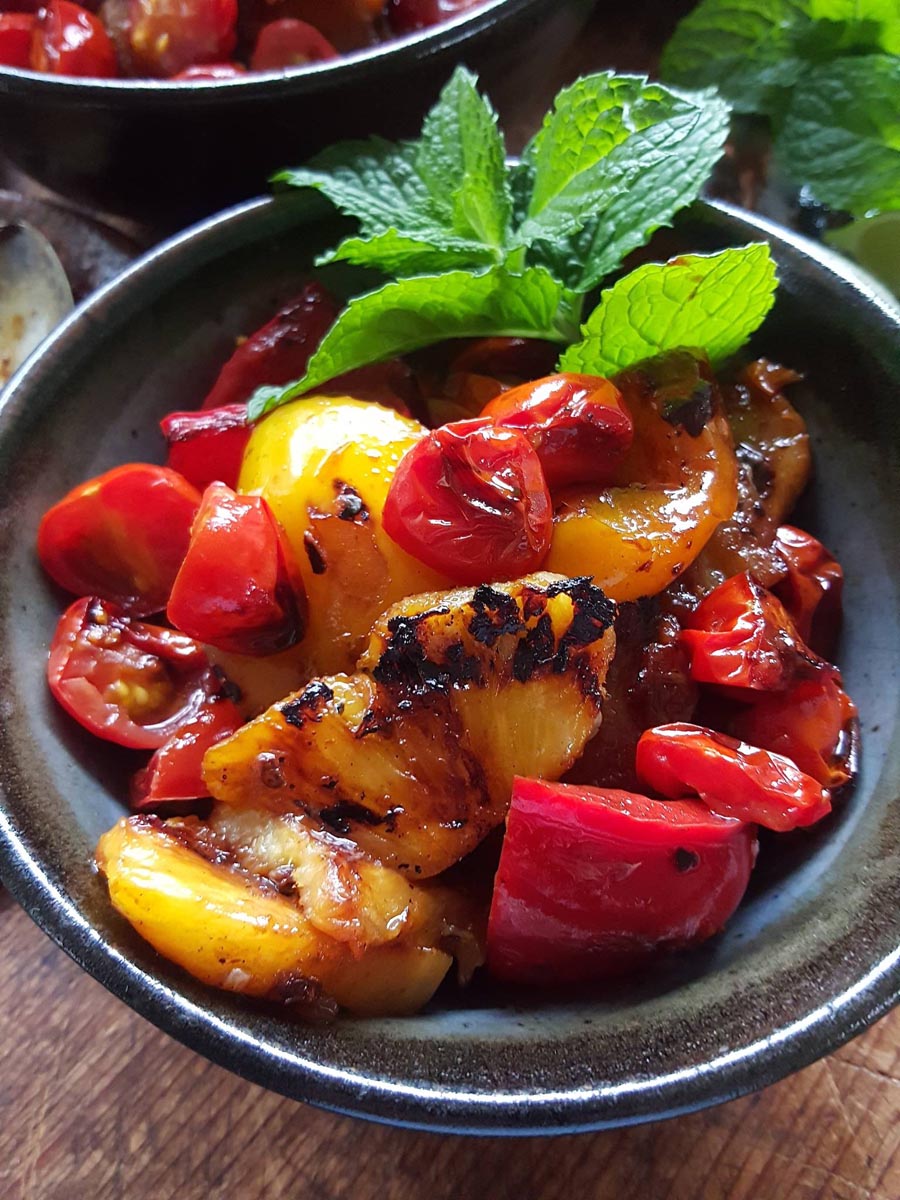 This is a stunner. If you want to turn it into a salsa, halve the amount of pineapple and, after grilling, chop finely with the grilled peppers. Mix with squished tomatoes and remaining ingredients. It makes a great accompaniment to pork or chicken tacos.

1 Trim pineapple and remove skin and eyes. Cut in half then into quarters, cut off the core from each piece, then cut pineapple into slices. Put pineapple on a plate.

2 Cut peppers in half, remove cores, seeds and membranes and cut each half into quarters. Cut tomatoes in half. Put peppers and tomatoes on a large plate.

3 Have a barbecue grill heated to medium. Drizzle half the oil over each plate of prepared food, then sprinkle on the sugar and lime zest, dividing them equally between each plate. Massage in with the hands; it’s messy, but the best way to do it.

4 Cook the pepper pieces skin side down to begin, until well speckled with black, then turn and cook until they are starting to become tender and a little charred. Transfer peppers to a clean plate and cover tightly with a large pot lid. If there is room, cook the tomatoes with the peppers, starting them cut side down, turn and cook the skin side until blackened (otherwise cook them after the peppers). Transfer to a plate when done.

5 Cook pineapple slices until a deep golden on both sides– you don’t want them to blacken as much as the peppers and tomatoes, so keep an eye on the heat, lowering it if necessary. Transfer to a plate when done. 6 Heat 1 tablespoon oil in a small pan, and when the oil is nice and hot add the chipotle chilli and cook 30 seconds on each side. Cool, then chop coarsely, discarding stem and most of the seeds and either pound in a mortar with a pestle, or grind in a spice grinder, or chop finely with a large sharp knife.

7 Once the peppers are cool enough to handle, peel off any blackened skin or flesh, scraping with a small serrated knife, then cut into bite-sized chunks. Transfer to a serving bowl. Remove blackened skins from tomatoes, and the cores, then squish tomatoes over peppers. Sprinkle with lime juice, toasted chipotle (reserving some for sprinkling over the top), chilli powder and salt. Top salad with pineapple and mint, give a few gentle turns and sprinkle with remaining toasted chipotle. Serve.

I had plenty of cherry tomatoes, so I used those instead of regular tomatoes. They are not as easy to char, but I let them colour as best I could, and added them skin and all, without squashing them to a purée. Failing a barbecue, the ingredients could be cooked inside in batches in a ridged frying pan.

Pork Burgers with Grilled Pineapple & Avocado
Here's the 'died and gone to Heaven' version of pork patties. Live dangerously and just make them!
Read more
Feta & Char-grilled Red Pepper Dip
Salty, sweet, tangy and creamy, but not rich ... dunk away and feel good about it!
Read more
Tunisian Eggs with Extras!
Harissa's a hot little devil – add as much or as little as you dare!
Read more