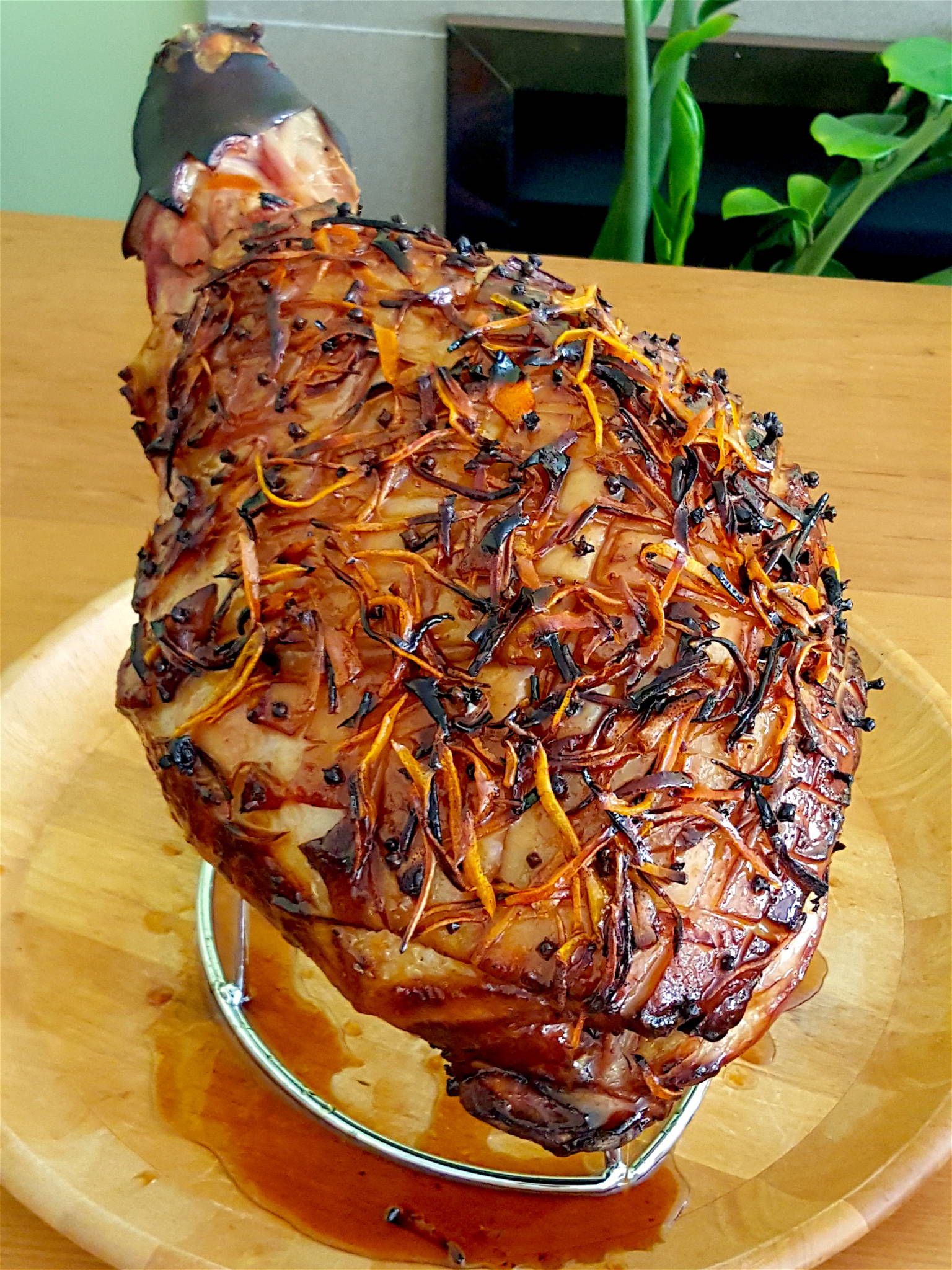 This is the bee's knees of hams. It's seriously good (the Maestro said so himself).

1 Preheat oven to 200°C (400°F). Peel rind from oranges in short strips (use the small tool designed to cut citrus peel into segments, or cut the rind off with a vegetable peeler and cut it into strips).

3 Carefully strip skin off ham, trying not to disturb the layer of creamy fat beneath it. Score surface of fat into small diamond shapes and stud each diamond with a whole clove.

4 Line a large roasting tin with a double thickness of aluminium foil, then line this with non-stick foil if you have it, raising foil above edges of tin. This will catch drips of glaze falling off ham and prevent flare-ups in the oven. Place ham in tin, making sure foil stays upright, nestling around the ham, rather than over the edge of the tin.

5 Pour glaze over ham and put ham in an oven. Mix strips of orange peel in glaze bowl, coating them with any remaining glaze. Spoon orange strips over top of ham about half way though cooking. If glazing for appearance only, it will take about 45 minutes to glaze the ham. As parts of the fat take on enough colour, place small pieces of foil on top to deflect heat. If the orange skin starts to burn – but a little charring is simply delicious with the sweet elements in the glaze so don’t be too numpty about it – pic them off with tongs and set aside.

6 If you want to serve the ham hot, allow an hour longer (1½-1¾ hours in total) to heat through, but lower the heat to 170°C once the ham is nicely coloured. You may need to protect the entire surface of the ham with foil after 50-60 minutes. The ham should be basted with the glaze every 15 minutes.

I am not going to kid you that you need strong arm muscles when moving a whole hot ham with sticky glaze in and out of the oven. I NEVER mix hot glazing ham + alcohol. Drinking while trying to do this job is a fool’s game. Either glaze the ham ahead and serve it at room temperature – this is an excellent idea for so many reasons, as you can get it done in the calm of the day, it frees up your oven, and it tastes so much better at room temperature – or stay off the bubbly until the job is done and enlist in the help of your strongest family member or friend to help when glazing the ham during cooking.

Read how to carve a ham here Carving A Ham

The Holy Grail of New Zealand Food
This is all you need to know, and then some, about New Zealand food, producers and experiences. Read more
Artichokes with Garlic & Mint
Be prepared to become addicted ... Read more
Coopers Creek Vineyard – still family owned after 38 years
And still producing award-winning wines. Read more