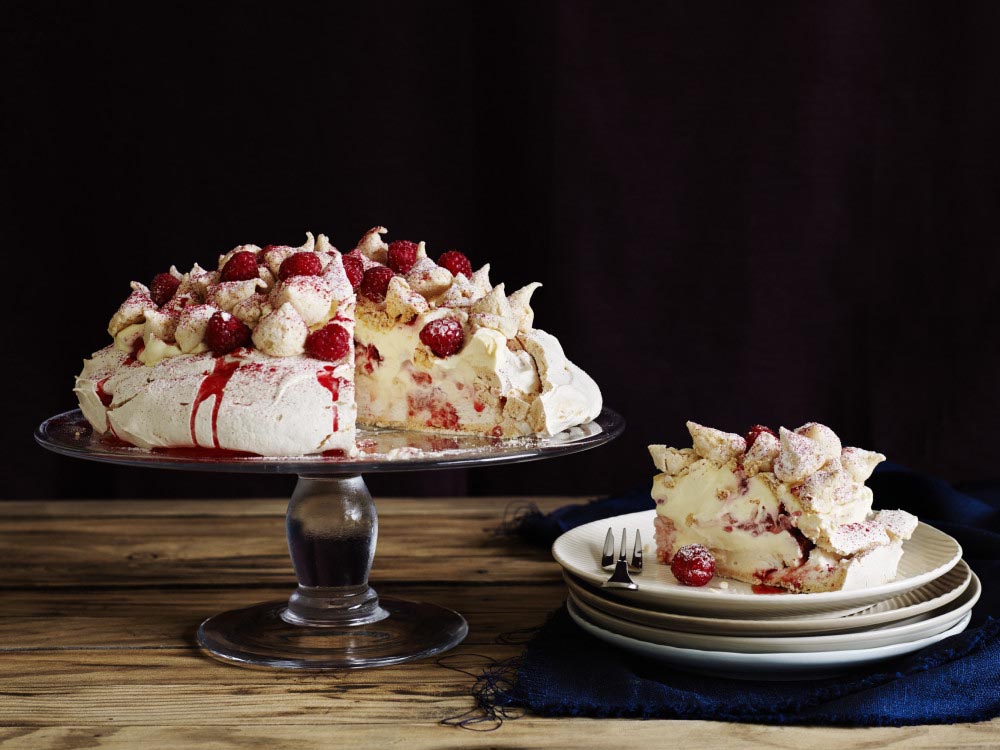 This is the stuff of dreams – a mountain of crisp meringue with a marshmallowy centre, filled with dollops of rich and velvety limoncello cream, dripping with tangy raspberry juice, stuffed with fresh raspberries, then finished with a generous shake of icing sugar and raspberry powder. Yeah! Truly awesome!

2 Put egg whites and salt in a greasefree bowl of an electric cake mixer. Whisk egg whites on a slow speed to begin. Once a soft foam forms, (about 2 minutes), increase the speed and whisk until stiff (less than 2 minutes). Continue whisking while adding caster sugar a tablespoon at a time. I usually drop the speed of the machine while adding the sugar to prevent it spraying everywhere but do not stop the machine, nor scrape down the sides of the bowl, during the process. Whisk for several minutes more until very stiff, then turn off machine and sprinkle over cornflour, vinegar and vanilla extract. Use a large metal spoon to carefully mix ingredients together without deflating the whipped whites.

3 Transfer mixture in dollops to the prepared baking tray, and keeping it within the traced circle, quickly smooth it into a rough round – don’t try to make it perfect or fiddle with it unduly because you’ll knock out air. Rough is good!

4 Bake in oven for 1 hour, by which time the meringue should be crisp on the top; it may be slightly sunken under the crisp shell but this is normal. Turn oven off and leave pavlova in oven for at least 1 hour, but preferably until the oven is cool (overnight is fine, just remember to remove it before you start the oven again!).

5 When ready to assemble, carefully turn pavlova over onto your hand and peel away the baking paper. Transfer pavlova to a cake plate or cake stand. Mix 1 tablespoon of icing sugar with half of the raspberries, setting aside the best ones for the top. Lightly whip cream until thickened and holding shape, but be careful not to over-whip it or it will turn buttery, adding the limoncello once the cream starts thickening. I like to put a few dabs of cream under the pavlova to help hold it in place, especially useful if you have a rimless plate or cake stand!

6 Gently tap the top of the pavlova, smashing it just a little to form a cavity for the cream (it will be somewhat hollow under the meringue shell), keeping the sides intact, but don’t fret if they crack or splinter. Put dollops of cream on top of the pavlova. Use about half the cream.  Strew with raspberries and all the juices, then pile on the rest of the cream. Arrange mini meringues on top of pavlova. Either leave in a cool place for up to 2 hours, or transfer to the fridge for 4-8 hours; the meringues will soften somewhat in the fridge and there’ll be a gorgeous contrast between crisp shell, marshmallowy meringue and rich velvety cream. Heavenly!  Before serving, dust with icing sugar, and raspberry powder, if using.

Cake mixer: The times given are for a stand cake mixer. If using hand-held beaters it will take longer to make the egg whites thick and stiff.  (Learn more about meringues)

Make it lighter: It might be hard to believe until you try this, but Greek yoghurt in place of cream works a treat, and makes a pavlova with fewer calories. Use 500g, (or about 1 lb) thick Greek-style yoghurt, choosing one thickened naturally, not with gelatin or stabilisers. If the yoghurt you buy is thin and watery, you’ll need to drain it (otherwise it will weep in the assembled pavlova). Consequently, it’ll lose some of its volume. If you are not familiar with the brand of yoghurt you are buying, it’s probably wise to buy an extra tub to make sure you have enough. Here’s how to do it: simply tip the yoghurt into a sieve lined with paper towels and leave to drain for 1-2 hours, letting the whey drain off. Tip strained yoghurt into a clean bowl and whip with a spoon until thick and smooth. Greek yoghurt flavoured with lemon curd or mango puree is also a good flavour match with raspberries, or use plain Greek yoghurt and dollops of mango puree or homemade lemon curd.

Double cream: Double cream has a higher fat content than single or ‘regular’ cream (around 48% and 37% respectively).  It whips to a glorious thick and velvety cream BUT it can turn buttery in the wink of an eye. If your kitchen is hot, whip it in a chilled bowl (stick a glass bowl in the freezer for 10 minutes to chill it down), or sit the whipping bowl in a sink filled with a few large handfuls of ice, or fill a large bowl with some ice and sit the whipping bowl in this. Regardless of the higher fat content, it is the perfect cream to use in a pavlova. Lighter creams collapse as the pavlova stands, and tend to weep watery liquid which spoils the pavlova.

Makes 60 large meringues, or 100 medium meringues, or 200 small meringues
To make mini meringues to decorate the top of a pavlova or gateau, pipe incy-wincy meringues – you’ll most likely get well over 200 – and cook as described. You might expect to cook them for a shorter time because they are so small, but they still need time to caramelize the sugar and to dry out. They do not need to be tapped on the bottom with a skewer as you do for larger meringues, but it is best to leave them to dry out in the oven as described. Transfer to an airtight container when cool. (Learn more about meringues).

1 Whisk egg whites in a totally greasefree copper, china, glass or stainless steel bowl until they are stiff and can stand in peaks on an upturned whisk. Add 2 tablespoons of the measured sugar and whisk in for 30 seconds. Now here’s a trick: Sprinkle over the rest of the sugar, but rather than dumping it in the bowl in one place and deflating the whipped egg whites, distribute it over the entire surface of the whipped whites. Fold sugar in carefully with a large metal spoon.

3 Bake in an oven preheated to 140°C (275°F) – do not use fanbake – for at least one hour, or until meringues are crisp and will lift off the baking paper without feeling tacky; swap the position of the trays once or twice during cooking.

4 Tap a little hole in the base of each meringue with a skewer and return meringues to the turned-off oven to dry; leave them for 1-2 hours if possible, then store airtight.

5 To serve as cream-filled meringues, whip cream lightly about 1 hour before serving, adding the vanilla seeds scraped from the pod. Sandwich meringues together with cream and arrange on a serving plate, mounding them up in a tower. Leave for one hour somewhere cool to soften the meringue a little. Dust with icing sugar and serve.

Raspberry Limoncello Bombe
Exceptional! And, a bonus, it can be made well ahead of the big day.
Read more
Ilaria’s Chia & Coconut Dessert
Stunning to look at, full of goodness and tastes divine.
Read more
Raspberries
In the perfect world we would buy just-picked raspberries, and consume them while they’re fresh and fragrant. Read more