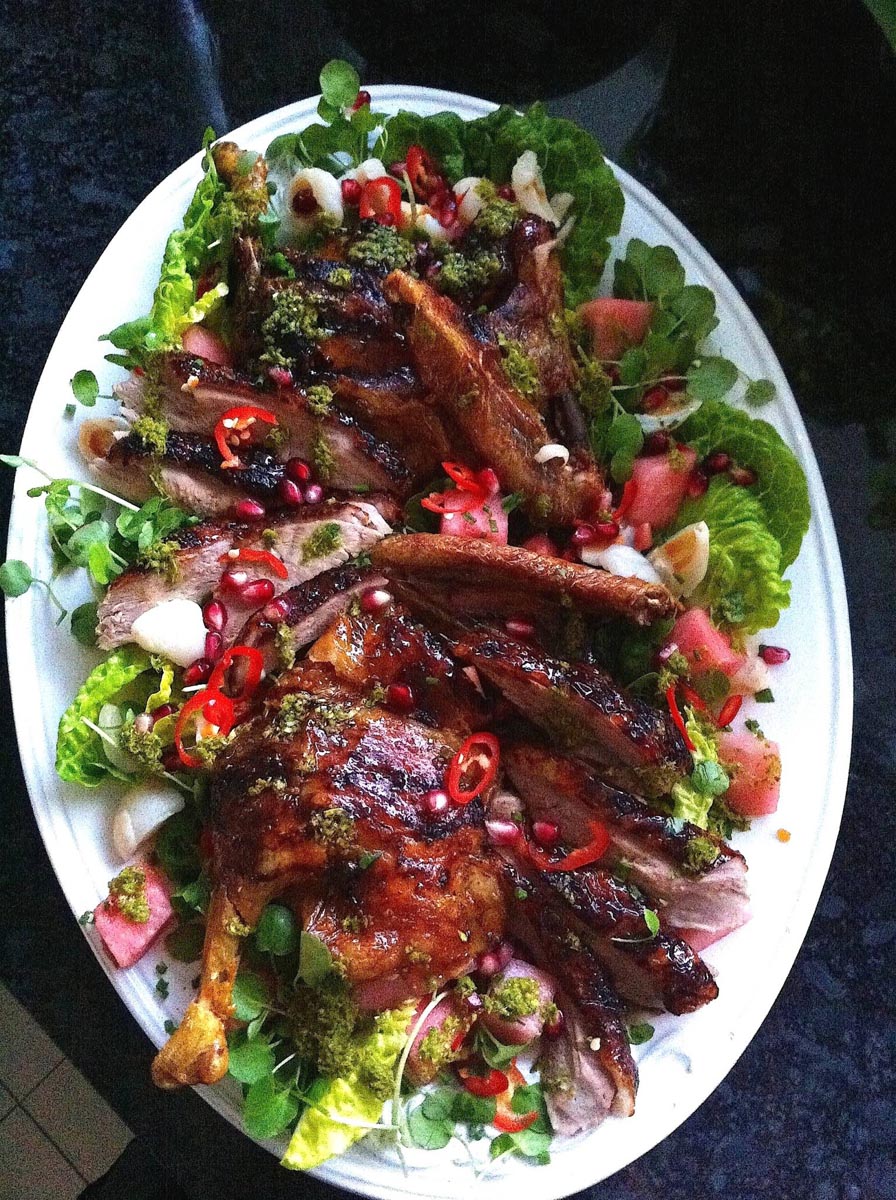 Served warmish, this exotic salad with hints of chilli and lime, shredded kaffir lime leaves and pomegranate seeds, explodes in the mouth with summer freshness. It sings ‘beach’ to me, and might just be the dish you are looking for if after something non-traditional.

There are lots of steps to this recipe, but much of the preparation can be organised the day before, or well ahead of cooking and serving.

1 Preheat oven to 140°C (275°F). Prepare each duck by removing giblets from cavity, cutting off parson’s nose, making sure you remove the two putty-coloured fat glands towards the back of the parson’s nose (they’re about as big as a small fingernail), and any fat, and trimming wing tips. Pat dry. Season inside cavity with ¼ teaspoon salt. Put some ginger slices and 3 kaffir lime leaves in the cavity. Prick the duck skin all over with a sharp metal skewer. Take your time to do this, because ridding the duck of fat as it cooks will keep it moist as the fat melts and bastes the flesh, and will ensure you have nicely glazed slices of duck without a tell-tale layer of inedible fat under the skin. Aim for at least 500 pricks per duck, concentrating on the fatty areas.

2 Put ducks breast up on an oiled rack set in a large roasting tin. Sprinkle with flaky sea salt. Roast ducks for 2 hours. Increase oven temperature to 190°C (375°F). Once the oven has reached this temperature, roast ducks for a further 25-30 minutes, until lightly golden.

3 Mix honey, lime juice and chilli sauce together in a small bowl. Remove ducks from oven and brush with glaze. Return ducks to oven and roast for 15 minutes more, until a deep golden colour. Remove from oven, drape loosely with tin foil and rest for 30 minutes.

4 While duck is cooking, trim cos lettuce, break apart, wash and dry leaves. Trim watercress, pick over, wash and dry. Transfer cos and watercress to a plastic bag/s lined with paper towels. Refrigerate.

5 Remove centre stems from kaffir lime leaves and chop leaves roughly. Transfer to a spice grinder and grind to a coarse dust (if you don’t have a spice grinder, slice finely by hand, discarding ribs, then chop finely).

8 Whisk lemon oil, lime juice and salt together in a small bowl. Choose 2 large platters big enough to hold ducks and salad. Put cos leaves on platters (break leaves into pieces if large), then watercress and watermelon. Sprinkle with half the chives and chilli. Lay duck on top, nestling pieces of lychee here and there. Scatter with pomegranate seeds, more chives and chilli. Add prepared kaffir lime leaves to dressing, rewhisk, then spoon over duck and salad. Serve immediately.

There is much you can do ahead.

A day ahead, prep ducks but don’t salt. Make glaze. Prep watermelon. Keep everything covered and refrigerated. Trim, wash and dry cos and store in an unsealed plastic bag lined with paper towels in vegetable crisper.

If necessary, the ducks can be roasted the day before (although the skin will lose some delicious crunch). Whenever you chose to roast the ducks, remember, it is much easier to remove meat from bones before ducks cool.

Before serving, bring the meat to room temperature, or loosen slightly in a microwave.