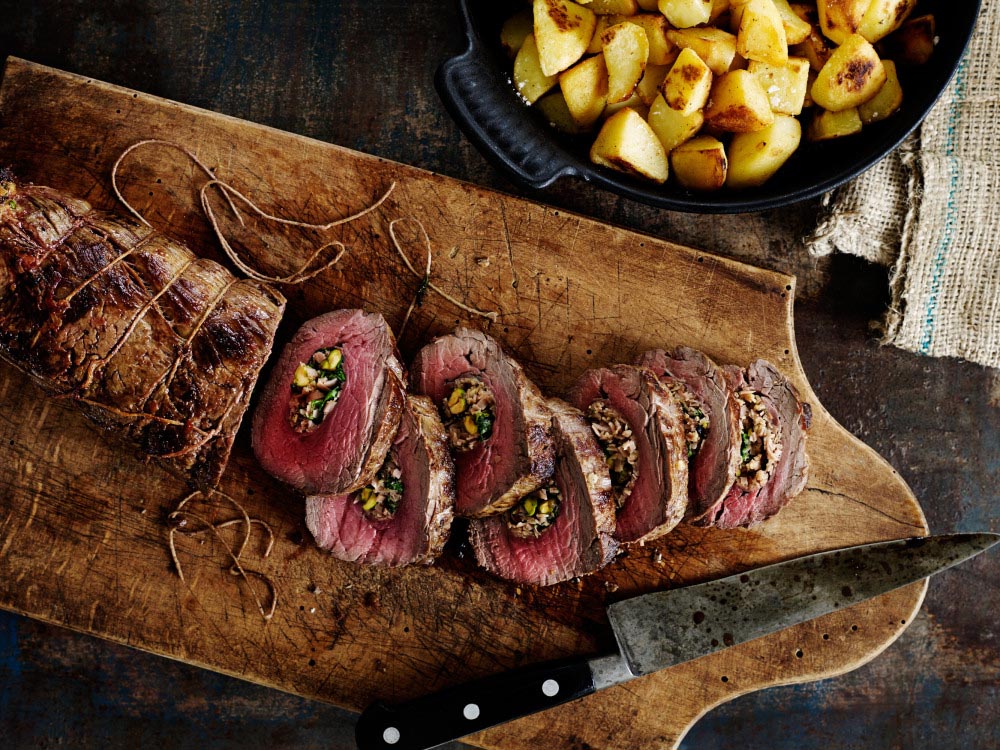 Fillet of beef is a prime piece of meat with a tender, almost buttery texture, but it doesn’t have as much savoury, meaty flavour as, say, sirloin (porterhouse). It’s what you put with it that gives it a flavour boost and turns it into a spectacular dish. It’s not cheap, but it’s a go-to dish for me when I want a knock-your-socks-off impressive dish. Works every time.

1 Preheat oven to 210°C (410°F), setting a shelf in the middle of the oven. Rinse fillet and pat dry. Remove any fat and silverskin. Make a small cut in the centre of the meat with a sharp pointy knife, then use the rounded handle of a wooden spoon to push through the meat to form a small tunnel.

2 Mix the mortadella, garlic, nutmeg, crumbs, salt and pepper together in a small bowl. Add enough egg to bind (roughly about half of it). Stuff into the cavity in the fillet, using the wooden spoon to help push it in, threading in the basil as you go and adding the pistachio nuts. It’s incredibly messy and at first you’ll never believe that all the stuffing is going to go into such a narrow tunnel, but it does, if you keep at it.

3 Tie the fillet into a good shape with string. If it has become moist, pat dry with paper towels again to minimize spitting once it goes in the oil. Heat the oil in a shallow but sturdy roasting tin over a medium-high heat. When the oil is nice and hot, lower in the fillet and turn it quickly in the hot oil, then let it brown on one side for 2 minutes. No more! Turn fillet over again with tongs and immediately transfer to a hot oven. Cook meat for 6 minutes, remove from oven, turn it over again and return to the oven. For rare to medium-rare meat, cook for a further 5-6 minutes, or until the internal temperature of the thickest part of the meat reaches 50°C (approximately 110°F), or until you are satisfied with the ‘touch test’ READ MORE HERE (Testing for doneness), or until it is done to your liking. Remove meat from oven, spoon over any juices, then season generously on all sides with salt. Rest beef for 12-15 minutes before slicing.

4 Remove string from meat, then slice it evenly. Let meat rest a minute or two before transferring to a heated serving platter. Skim pan juices, pour in wine and let it bubble up briefly. Spoon juices over meat and serve immediately.

Meat tips:
It is imperative that the meat is at room temperature before cooking, not taken straight from the fridge, or it will take much longer to warm through and start cooking. Tying the fillet into a neat shape with string will prevent it from curling up during cooking which makes it easier to slice neatly. Always rest meat before slicing to enable the juices to settle. The correct knife to use for slicing meat such as a fillet is one with a long slender blade that glides through the meat without hacking it or tearing fibres. The fillet can be prepared, stuffed and tied up to 24 hours before cooking, but again, it is imperative that it is at room temperature before cooking.

To check cooked meat for doneness, press with tongs, or your fingers:

The temperature of the meat will increase for up to 5 minutes after it is removed from the oven or heat source (this does not apply if cooking by sous-vide).

Creamed Corn with Tarragon
This is such a lovely combination, creamy and sweet, with a gentle liqourice-vanilla note from tarragon as a backdrop.