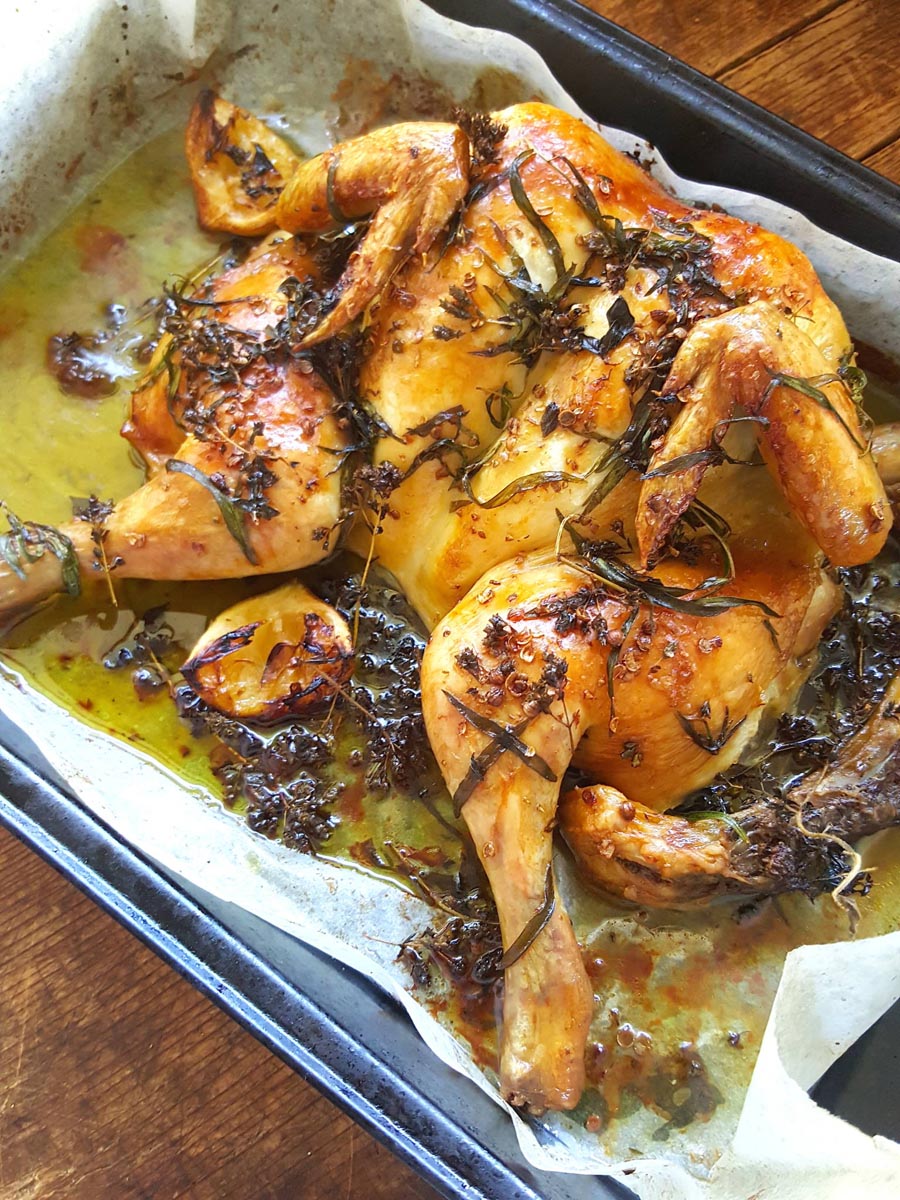 This chicken takes no more than 5 minutes to prepare. Then you’ve got an hour or so to fill in while it cooks. Pour yourself a glass of wine and peck on a few olives while you listen to the comforting sound of it cooking to a golden crisp, drinking in its glorious smells. Cooking shouldn’t be all hard work.

If you’re a party-pooper, you’ll probably put the chicken on a cake rack inside the roasting tin so it is suspended above the gurgling chicken juices. Nah, I don't.

1 To’ spatchcock’ the chicken, cut it in half, cutting down each side of the backbone with a pair of scissors or poultry shears, and force it to lie flat (snap the thigh and wing ball and socket joints). Pull off any fat and discard. Sprinkle the inside of the chicken with a little salt, grind on a little black pepper, and add a sprig or two of oregano. Transfer it to a roasting tin, turning it skin side up. 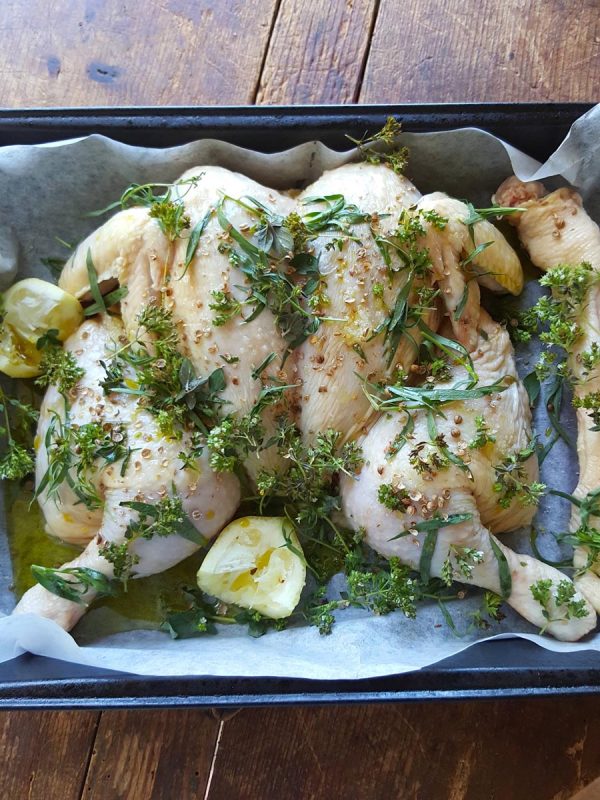 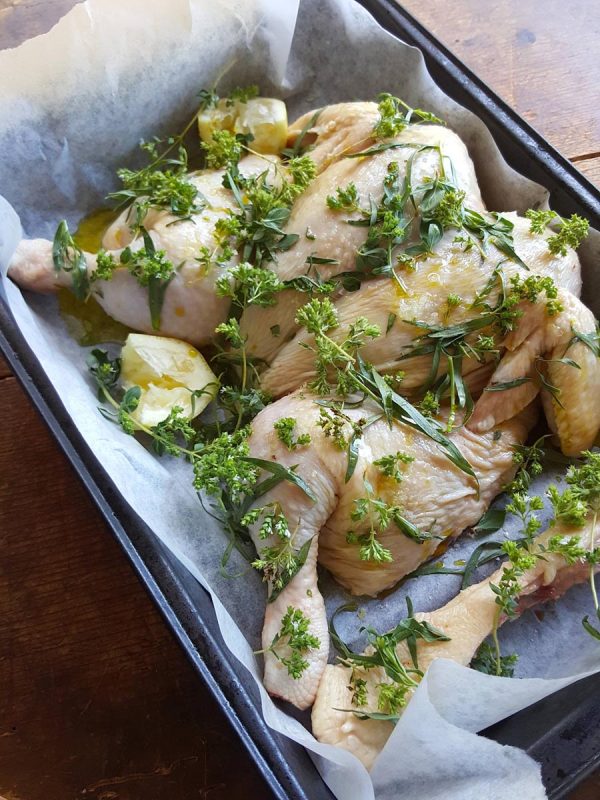 2 Rub the lemon pieces over the chicken skin, squeezing on the juice. Sprinkle the chicken skin with crumbled oregano, and salt, and grind black pepper over, then drizzle with oil. Put the pieces of lemon and the chicken backbone in the dish too.

3 Cook the chicken in an oven preheated to 200°C (400°F) for 30 minutes, basting often, then lower the heat to 180°C (375°F) and cook for 50-60 minutes more, basting every 15 minutes. When the chicken is well browned and cooked through, transfer it to a heated serving plate. Let it rest for 15 minutes, or up to an hour before serving (keep it covered with a food umbrella). Cut it into serving pieces using a knife and fork at the table. 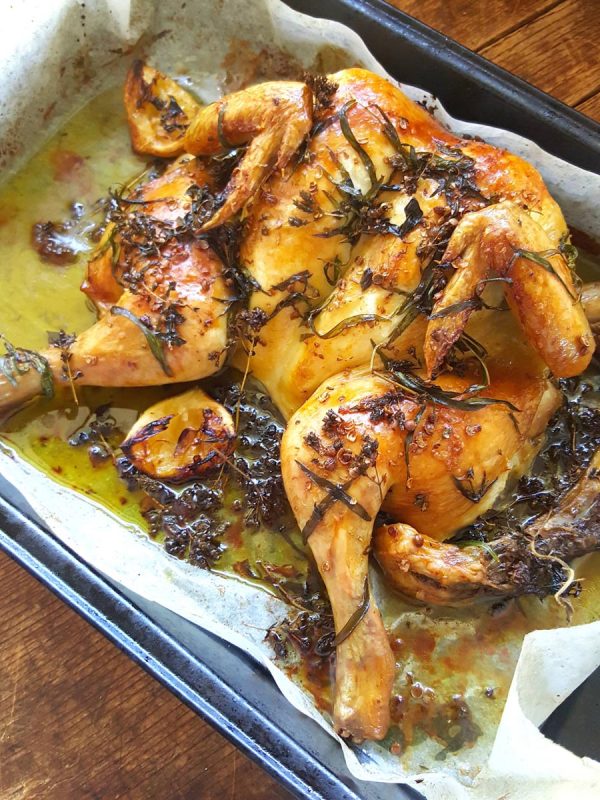 Cook until golden and cooked through 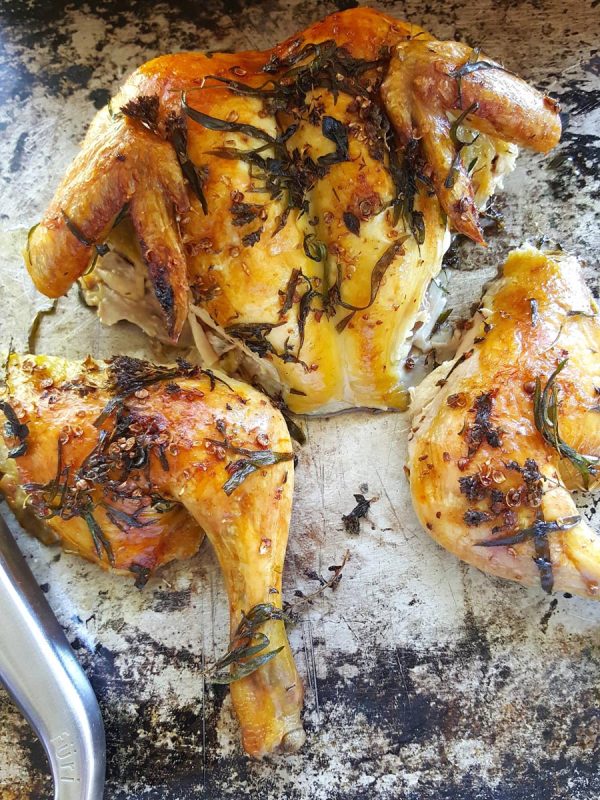 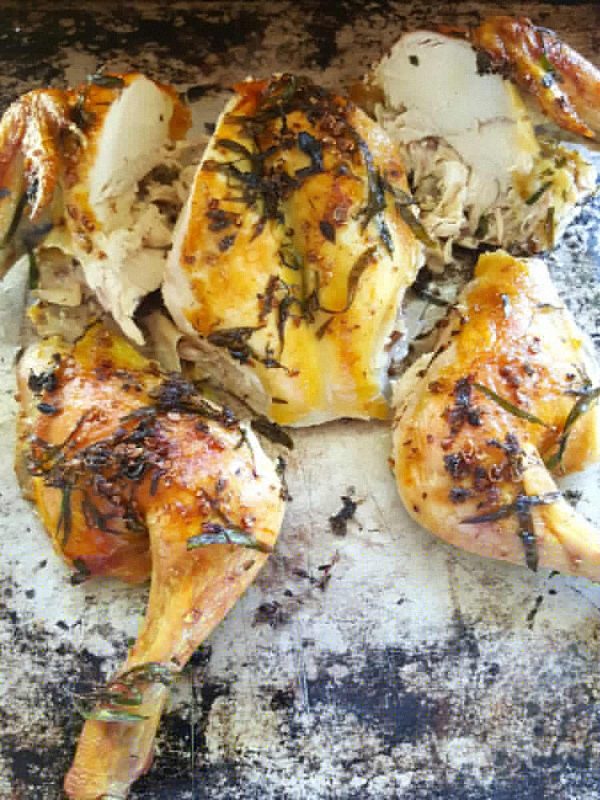 Next, remove the wing joints, again cutting through the ball and socket joints. 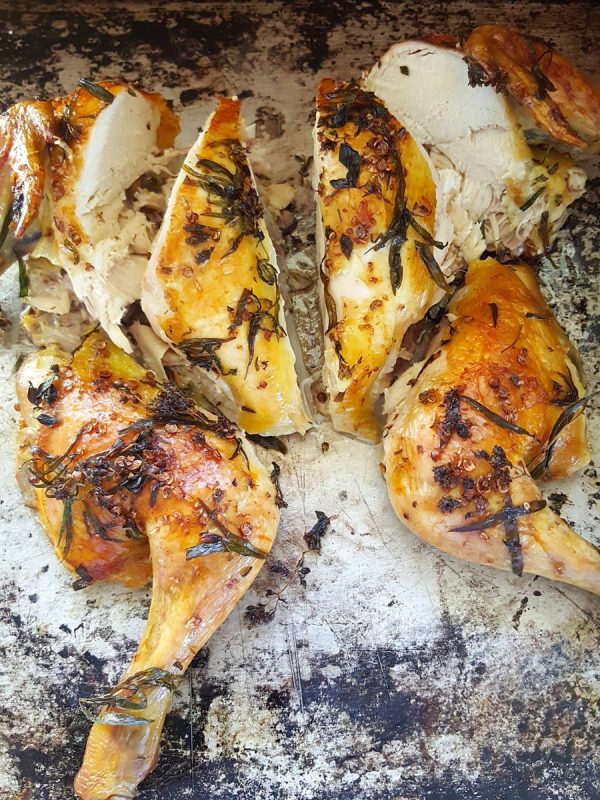 Slice the breast in half, discarding breast bone – and there you have 6 large joints of chicken. 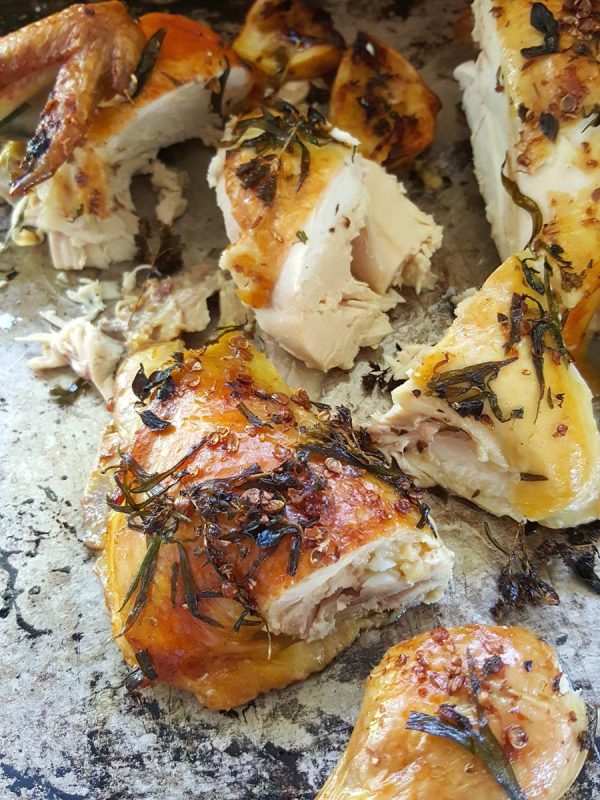 Cut the chicken joints into smaller pieces if preferred.

This dish is sometimes known as motorway chicken simply because the chicken is squashed flat. I’d never seen chicken cooked and presented this way until I went to Greece in the mid seventies. Mounds of flat crispy-skin roasted chickens in food shops tantalized passers-by. All you needed for an outstanding picnic was one of these chickens, a loaf of bread and a bucket of retsina – bliss (apart from the knocking headache from the retsina the next day!).

Rubbing the chicken with lemon and drizzling it with olive oil, and starting the cooking on a high temperature makes the skin pop and sizzle and develop a rich golden colour and gorgeous flavour.

I sometimes use Greek or Sicilian oregano and the aroma when I rub the flowers and leaves together in the palms of my hands is magic – I could swear that I was back hiking through the hills of Crete crushing wild oregano underfoot. I also use my own long-stemmed oregano, using the flower heads only, not the leaves. I also love it made with rosemary – that resinous heady perfume it gives off as the spikes turn crispy always induces my hunger … and seemingly, that of anyone else who happens to be in the house, because they start hanging around the kitchen once the chicken starts doing its thing in the oven.

Plum Crumble
A proper pudd, but one you can whip up on the fly. Read more
Puy Lentil & Chorizo Soup
Chorizo gives layers of flavour to this soup. And it's one of those soups that tastes even better the day after making. Read more
Kumara Crisps
Golden and crisp, hard to resist! Just the ticket to go with drinks (and, YES, you can make them ahead). Read more