I’ve heard that there’s likely to be a shortage of jersey benne potatoes during early summer. Drat! I’ve just had the best box of them ever and it has rekindled my love (they came from Kakanui near Oamaru, and with its microclimate it is THE potato spot!). Some years I go off them after striking one too many sour ones (the type that make you go BLEEAAHHH! and poke your tongue out). I don’t know what causes this terrible taste, but it’s a shocker. It takes about 10 minutes for it to dissipate before anything tastes good again. Does anyone else experience this? It gets to the point where it is like playing Russian roulette … is this going to be a bad one, or is that one a baddie… and that’s when I say, NO MORE, no more expensive boxes of potatoes because they are freaking me out.

Of course, come spring, in I go again. Oh, and what a wondrous thing a perfect jersey benne is with its yellowish fudge slightly sweet and sticky flesh. Yes, I’m in love again! And I’m hoping that there will be a constant supply right through until after Christmas.

Anyone who has dug up a new potato and taken it to the kitchen sink for washing will know that the skin will wrinkle up and slip off with gentle pressure, or it can be easily scraped off with a small sharp knife. That’s a good thing because you’ll retain more nutrients if you leave the skin on. If potatoes are newly harvested and it’s early in the season, this might be your luck. If the skins are thick or tough, you must decide whether to peel them before cooking or after. I think it depends on what you’re going to do with them. For salads, steam the potatoes to keep in all their flavour and nutrients, then peel when cool. For hot potatoes, it’s easier to peel them first.

Scrape new potatoes with a small serrated knife, to get dirt out of crevices, then steam them. Add mint stalks if you like, and do sprinkle with salt. Steaming is a great way to cook potatoes because they sit above the water, not in it, so retain all their water-soluble Vitamin C, of which early varieties have plenty, but more than that, it saves the potatoes from absorbing water, which dilutes their flavour. I steam them JUST until they are tender, because they will continue to steam as they cool. Now here’s the trick … as soon as they are ready (just about tender) remove the potatoes away from the saucepan of boiling water still in their steaming basket. Plonk them on a chopping board, over a bowl, over an empty (cold) saucepan, wherever you like, and cover the top with a layer of paper towels. This keeps in the heat and the potatoes finish off cooking, but the paper also absorbs moisture, leaving the potatoes dry, not slimy. It is the best tip ever, I believe.

Then go to town with as much butter as you can afford. HaHa … I used to write ‘as much butter as you dare’ but with the steep rise in the cost of butter here, I think it’s more about how much of the weekly budget you can afford to part with for butter. In my case, quite a lot. Oh, and a thing about butter … don’t use crappy bits smeared with jam or vegemite, or the yellowed scrapings off a butter wrapper. No, no, not good enough. Buy a block of fresh creamy butter, keep it refrigerated until required (in a hot kitchen it can start to warm up and then it’s on its way to turning rancid), and add gorgeous thick chunks of butter (quite a lot) to the potatoes while they are still hot, but not piping hot, then devour. If you add butter to piping hot potatoes, it melts immediately, and often forms a puddle in the bottom of the bowl. That’s not where you want it! I reckon each mouthful of potato tastes amazing with its own little sliver of butter that is just starting to melt. Yeah, you can get quite mental about these things … but a bowl of perfect potatoes, fresh butter, flaky sea salt (as opposed to salt with additives added in) is a thing of joy, and good enough to have as a meal with little else bar a good fresh garden salad. Oh, and a glass of wine, or three.

If you don’t have a 2-pot metal steamer system, use a bamboo steamer. You can also buy metal inserts to fit inside pots. These are really handy because they can expand to fit pots from 16 to 25cm and turn any pot they fit into a steamer. They sit in the pot above the water and open up like the petals of a flower to fit the pot. Nifty idea. Kiwi design I believe. $11.99 at Briscoes (NZ). When not in use, they collapse down and don’t take up much room.

Potatoes are generally described as waxy or floury, with waxy ones being associated with spring and summer and floury or starchy potatoes being at their best in winter for roasting and baking in their jackets, but annoyingly, potatoes often fall in between these descriptions. It’s not just the make-up of individual varieties, it depends on whether the potato is dug at the beginning of the season, in the middle, or towards the end, and the type of soil it is grown in. Ilam hardy is a classic example, starting off as a waxy potato when freshly dug in spring, but becoming quite floury towards the end of the season. And early varieties grown in colder climates tend to be waxier than those grown in the north.

New potatoes appear early in the growing season, from spring to Christmas, and they are generally small, or will fit in the semi-closed palm of your hand. It’s common to buy them covered in dirt, and this offers some protection from light (although they are often sold in a box). The texture is waxy and sticky because the sugar has not yet converted to starch. The stickiness holds the flesh together after boiling helping potatoes keep their shape and stopping them from crumbling when sliced.

The conundrum is this: once a potato is dug, it’s peaked, and is immediately on its way to becoming old, but not old in the sense of floury, starchy late-variety potato, just no longer a freshly dug new one. Naked scrubbed potatoes heaped in a pile at the supermarket shriveling and threatening to turn green under fluorescent lighting does not constitute what this writer means by new potatoes. These potatoes have been washed for the consumers’ convenience, but by doing this, it shortens their life as they turn green more quickly. Buy them freshly dug when you can and buy them with dirt on. Cook them straight away and enjoy them at their best. That way you’ll get to enjoy the full earthy-sweet flavour and their resilient but fork-tender texture.

Most new potatoes turn gluey if mashed, so don’t attempt it. They can be lightly crushed with a fork then seasoned with butter or extra virgin olive oil, salt and pepper.

Potatoes bruise very easily, so treat them gently, rather than flinging them in the boot of the car when unloading the shopping trolley, and dumping them on the kitchen floor when you get home.

And, what to do with leftover potatoes? Sizzle them in butter until golden. Read here for tips Sizzled Potatoes 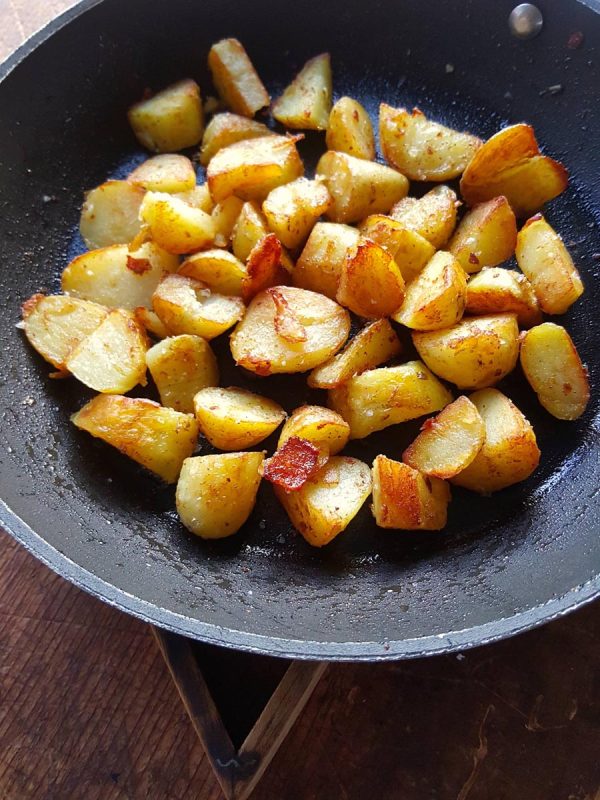 Chives – to chop or snip, that is the question
Chives are easy enough to grow from seed ... don't be surprised if you grow enough to start a market stall! Read more
Buttercup Pumpkin
Roasting buttercup pumpkin intensifies the sweetness – crank up the oven! Read more
Gazpacho – A chill thrill!
Like a blast of cold air from a fan up your shirt or skirt on a sweltering day … Yup! Icy cold gazpacho is exhilarating! Read more