Leeks do a great job in providing a flavour base for soups, and they’re a real star with potatoes and cream in vichyssoise (a chilled summer soup). A winter version served hot is just as good. But there’s much more to do with leeks than just make soup.

The same ingredients which go into vichyssoise make a gorgeous mash, the sort of thing you could just keep on eating. Extend it with freshly grated nutmeg or fresh thyme, lemon or regular, and you have a mash that will go with pork, chicken, beef and lamb, and that can form a sort of cushion, if you like, for roasted tomatoes or fried eggplant as part of a delicious all-vegetable meal.

Leave out the spuds and soften sliced leeks alone in butter until meltingly tender and serve with a roast of beef with crunchy roast potatoes. Cook them with wine or lemon juice for another flavour. Leeks a la Grecque – a mix of leeks, tomatoes, lemon zest, thyme, garlic, olive oil, lemon juice and black olives, is colourful, fragrant, good for you and that D-word again, delicious. 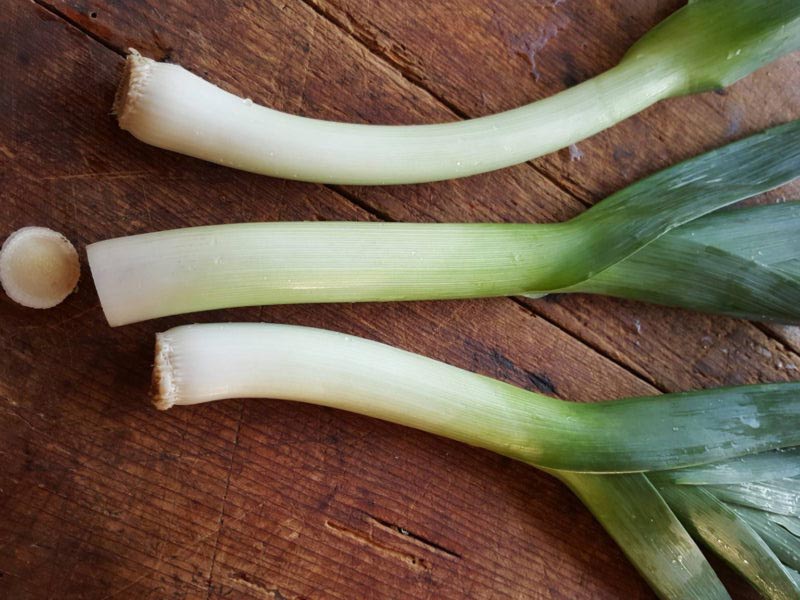 To make memorable dishes with leeks, first get some decent leeks, and here’s the rub: I do wish that supermarkets – they are usually the culprits – would not cut into the leek when trimming off the roots. Yes, I understand that dirt-encrusted roots probably need to be removed in case shoppers are turned off by vegetables in their natural state. Personally, I find them beautiful, roots, dirt and all. But is it laziness that sees someone ‘out the back’ whack a knife through the end of the leeks, cutting into the leek itself, instead of just cutting the roots off at the base of the leek? What they are doing is exposing the leek flesh to the air, speeding up cell damage and bringing on decay. As humans, that’s what we are fighting against. We’re eating vegetables to slow down this very thing. I say loud and clear, then, that the best leek, apart from a freshly dug one, is one which is trimmed to the root base only, not cut into. Worse still, is the retailer who puts the cut ends of leeks in water to extend their life – the Vitamin C is leeched out in the water! Leeks, like other members of the onion family (spring onions, onions, garlic, chives) oxidise quickly. It is best to cut them just before using.

Leeks if properly trimmed will keep some days under refrigeration. Look for leeks with dark green fresh leaves, not wilted ones. Avoid monsters. Regular sized fresh leeks, neatly trimmed, will give you the best results. Watch towards the end of winter as they start to grow woody inside (sometimes you can even see the flower stem forming inside the centre of a leek). They are quite odiferous, so keep them loosely enclosed in a plastic bag in the vegetable crisper to contain smells. Delicate foods such as soft cheeses and butter, and eggs, which have porous shells, can absorb these odours.

Whatever you do to leeks, don’t over-cook them, because they become slimy. Conversely, lightly cooked leeks are not always edible – they make your teeth squeak and are hard to chew. You’ve got to get them somewhere in the middle, fork-tender but still holding together. It calls for judgment, and attention to their cooking. 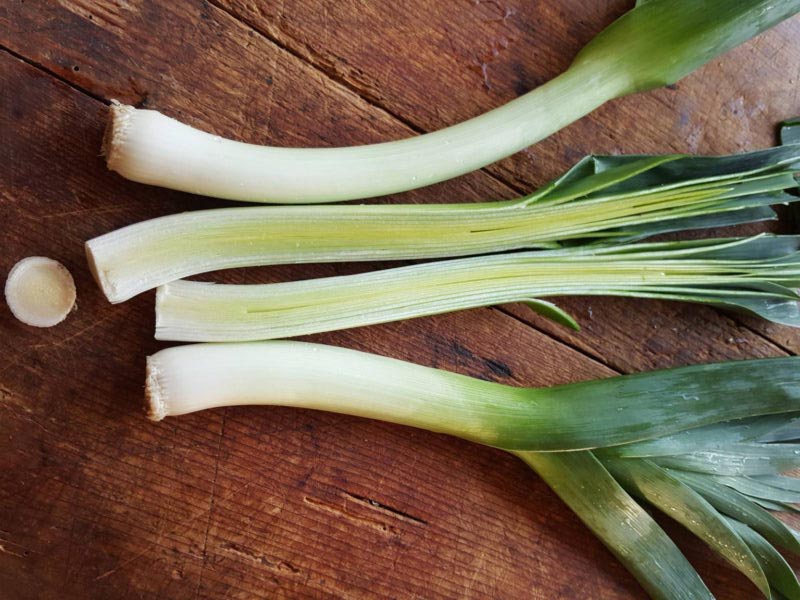 To prepare leeks, remove any outer damaged leaves, then trim the top leaves, leaving 1-2 centimetres of green, and wash the leeks thoroughly under running cold water. Slice into cylinders or chunks, checking there is no dirt.

I find it easiest to split the leeks in two down the length, and to let the cold tap run in between each leaf to flush out the grit. The leeks can then be cut into short lengths, cut into rings, cut on the diagonal, or chopped finely.

Small leeks can be left whole. If they seem gritty, soak them briefly in cold water, then shake to ensure they are grit-free. Cook just until they are slightly resilient in the centre, drain well (tip them upside down briefly), then pat dry with paper towels, and toss with garlic butter, or herb butter, or with a vinaigrette, and serve warm or at room temperature.

Slim baby leeks can be cooked whole. Trim off as much of the top as you need to, until you are sure there is no more dirt lurking inside the leeks. Cook in gently boiling water until tender, or steam them. They can also be roasted, barbecued or grilled. 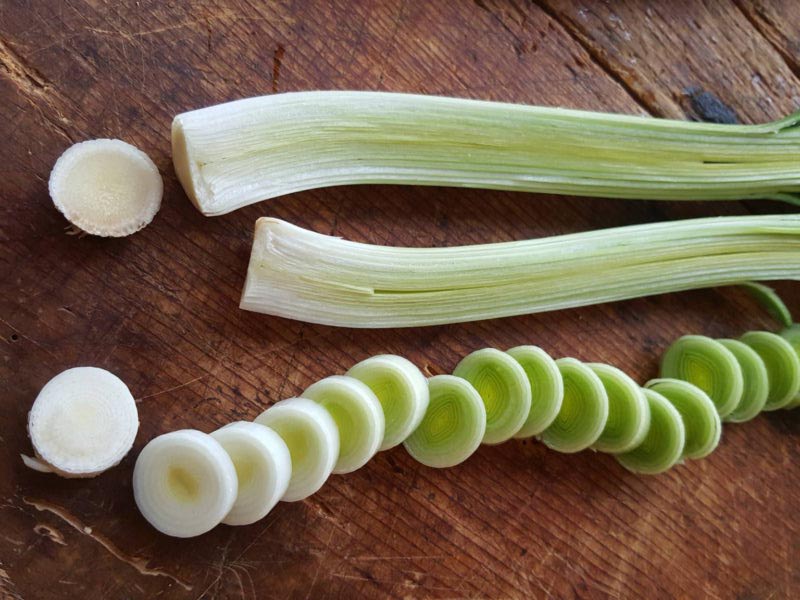 Leeks can be cut into short lengths then into strips (julienned) and cooked gently with carrots and parsnips cut the same way. Put a good knob of butter in the bottom of a saucepan, add julienned carrots and parsnip and put leeks on top with a tablespoon of water, cover and steam very gently until tender. This makes a great plate-mate with lamb and beef.

Leeks are sweet tasting, and can be caramelized to good effect, either by roasting – first drizzle with a little olive oil, on their own or in a mixed tray of vegetables – or fine strips of leek can be fried as a garnish.

They also make an excellent filling for a quiche – they love butter, cream and cheese. Add a dash of nutmeg, some sizzled bacon or ham, or throw in some baby spinach leaves, and fill into a partially baked pastry case, then return to the oven and bake until golden.

For some peculiar reason, or at least, one that I have never understood, some gardeners take delight in growing giant-sized vegetables. They may win prizes at agricultural fairs, but once these monsters are put in the cooking pot, it’s all down hill. The texture is usually too coarse or fibrous and the flavour too strong or bitter. It pays to heed the advice that ‘bigger does not mean better’ when buying leeks. Go for the small and perfectly formed variety – they’re more tender and sweeter too.

Whatever their size, babies, pencil-slim or medium-sized, leeks need to be very well washed to remove grit before cooking. As they grow, soil is ‘hilled up’ around them in order to keep the leeks out of the light and so produce tender, white leeks. Invariably, some soil gets trapped within the leaves.

Choose leeks with a lot of white stem because this is the edible bit – most of the green leaves are coarse and need to be trimmed away (they can be used in stocks and some soups, and can go in a compost bin).

However you cook leeks, they must be cooked until tender – you just cannot masticate a tough piece of leek. Be careful not to cook them to a mush, though, unless you want to make a purée. A fluffy whipped potato purée flavoured with tender mashed leeks, loads of butter, cream if you dare, salt and grated nutmeg is heavenly. So if you do inadvertently turn the leeks to mush…. you know what to do. If you don’t happen to have a pot of mashed spuds at the ready, turn the leeks into a purée in their own right and mix in cream, garlic and plenty of black pepper. You could do worse. 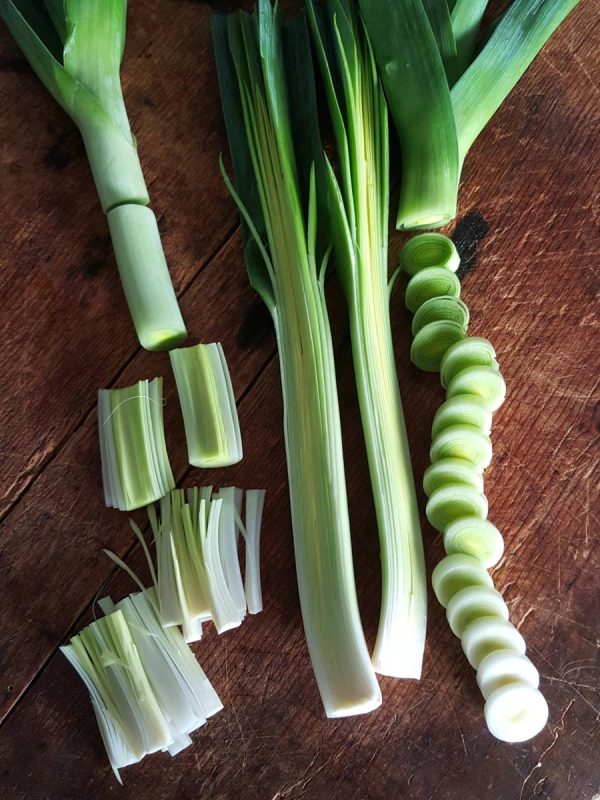 When thinking of what to put with them, think back to the ancient Romans who were rather partial to this vegetable. They livened them up with vinegar. Lemon juice, white wine, capers and tomatoes will all do the same job – which is, help to counter the leeks’ natural sweetness.

Take a lead from asparagus too. What works with asparagus generally works with leeks. This includes most of the dairy family: cheese, butter, cream. Leeks are also fabulous with bacon and ham, herbs such as thyme, rosemary, bay leaf, marjoram, parsley and chives, and with garlic, olive oil and white wine.

For the records, leeks belong to the same family as onions, garlic and chives. They contain antioxidants (Vitamin C and E) and also have folate, B-carotene and traces of iron, calcium and potassium. If eaten regularly they may help to keep cholesterol levels low and the blood healthy. They’re a good source of fibre too. That’s plenty of reason to eat them but if you’re looking for something other than the ubiquitous leeks in white sauce, check out the following luscious leek ideas.

*Boil baby leeks until just tender, drain, rinse and drain again. Press to extract excess water. Dress with a mustard vinaigrette and serve as a starter.

*Make leek and potato soup, garnish with chopped crispy bacon, or, in summer, make Vichyssoise (the chilled version), garnished with a little fresh mint. These soups might seem passé, but they never fail to please … just remember to season them with plenty of salt.

*Cut leeks into fine strips and deep-fry. Use as a garnish on top of fish dishes.

*Use chopped leeks in a stir-fry, but make sure you get them in the wok or pan early on to ensure they become tender.

*Steam or blanch leeks and press out excess water. Put in a shallow Swiss roll tin (jellyroll pan), or similar, and brush on both sides with extra virgin olive oil. Put under a hot grill and cook until golden on both sides. Serve hot with lemon wedges.

*Make a smoked cheese tart with puréed leeks enriched with cream, seasoned with black pepper and nutmeg. Add chunks of smoked cheese and pile into a partially cooked pastry-lined flan ring. Cook until golden and bubbling.

*Cut carrot, celery and leek into thin matchstick shapes (julienne) and put them in a saucepan with a large knob of melted butter with 2 tablespoons of water. Season with salt and pepper, cover with a lid and cook very gently until tender. Stir through chopped parsley before serving.

*Harp back to Roman times and make sweet and sour leeks. Cook chopped leeks with olive oil, lemon juice, tomato purée, a splash of water, salt and pepper and raisins, until tender.

*If you grow leeks, you can trim off some of the young green leaves and use them in salads.

Most of us have heard of cock-a-leekie (a Scottish soupy stew made with chicken and leeks) but hat-a-leekie is something else. Why anyone would want to wear a leek in their hat is beyond me, but not to the Welsh who claim the leek as their national symbol – all to do with a bunch of Welsh warriors who went to battle wearing leeks in their hats. They won the battle! Food historians suspect the leeks the Welsh warriors wore were different to what we have today – hopefully smaller!

Roasted Cauliflower with Smoked Paprika & Fennel Seeds
An 'Oh Wow' moment if ever there was one, like all your birthdays have come at once (that's if you are a cauliflower lover ... and who isn't?). Read more
Private cheffing on Waiheke
Need a caterer for special events on Waiheke? Read more
Time for pie
Ilaria seems happy stirring. What's she up to? Read more