Humpf here. Did you meet me the other week?

I’m quite a star now, appearing on Facebook, having lots of visitors and whatnot but it’s so busy I haven’t got time for much of that.

Take today. I was stuffed back into my carrier thingy and put in the car. I decided not to get upset about it but I had this sinking feeling that I was being taken back to where I came from. It turned my stomach a bit but for the sake of dignity I held on. Well, you won’t believe what happened. I was taken to the VET. Big sign outside the door VET. I didn’t much like hanging around there because it just smelt like a jungle. I couldn’t really figure it out, but what I am sure of is that there have been many cats and other unmentionable beasts through that doorway. It makes me shudder to think about it even now. Anyway, eventually I was taken into another room. It had a curious top smell, like something I’ve smelled on the bathroom floor mop at my new home, but underneath that there was a really strong animal smell. The bench was clean so when they opened the cage I hoped out to investigate. Anyway, this tall lady, nice hands and nails, and quite gentle, looked in my ears. What did she want to do that for? I was glad they were clean. Then she stuck something cold on my tummy, connected to her ears. I wanted to grab it but thought I would get told off. And how embarrassing, my mother, I say MY MOTHER drew attention to my dirty nose. Well, do you know what the lady did? She just picked the black stuff out of my nose and said it was dirt. Dirt! I knew that. So? Then I got a jab in the neck, followed by a pill stuffed down my throat and something rubbed on the back of my head where annoyingly I couldn’t reach it, then that was that, I was bundled back into my carrier box and we drove off home. Boy, was I glad to get out of there.

‘Come back in 3 months,’ she said as we left. Not likely.

I just shot through, under the fence to the neighbour’s. Stayed away all day. I’m not going to put up with that carry-on. 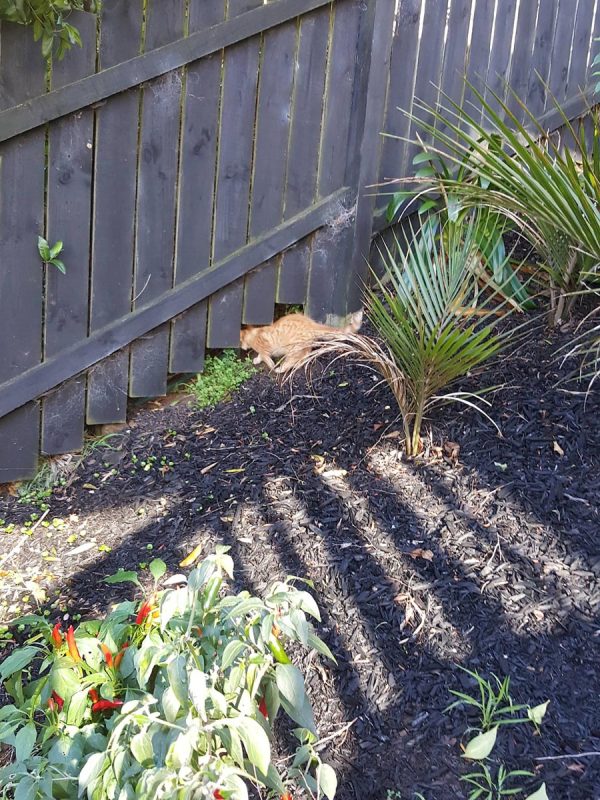 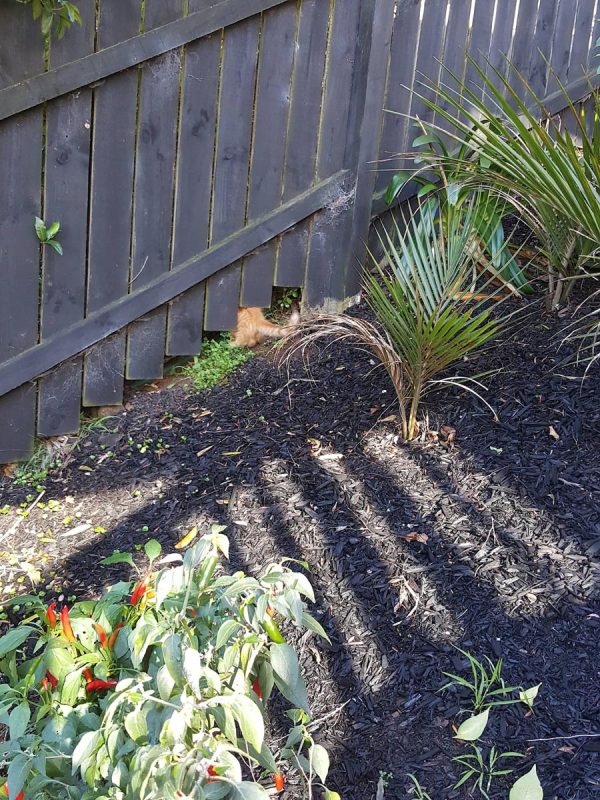 Of course, I heard mum rattling the biccie bag, and I couldn’t help myself, I ran as fast as my legs could go, but it was wet and when I got inside I skidded all over the floor. Before I was allowed to eat I got my paws washed and all the cobwebs wiped off my whiskers and face. Talk about freshening up for dinner.

It’s been a busy week, helping with food photography … 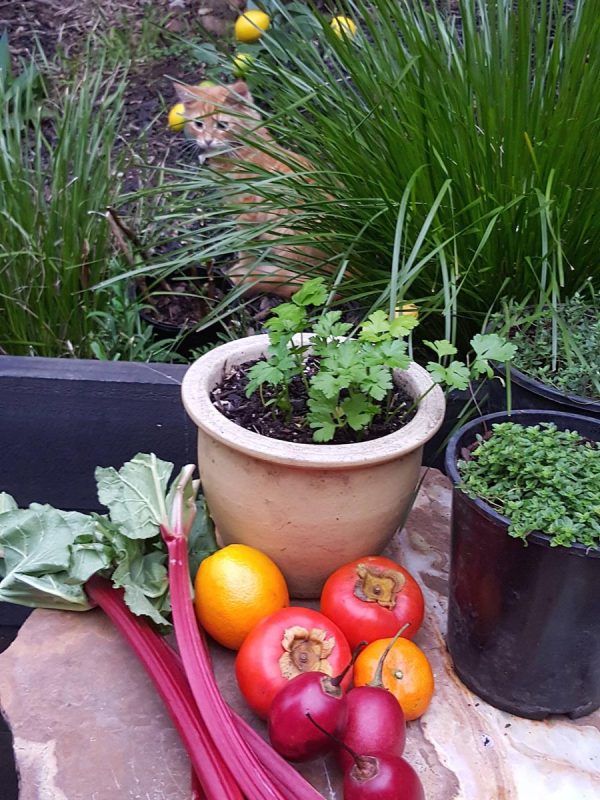 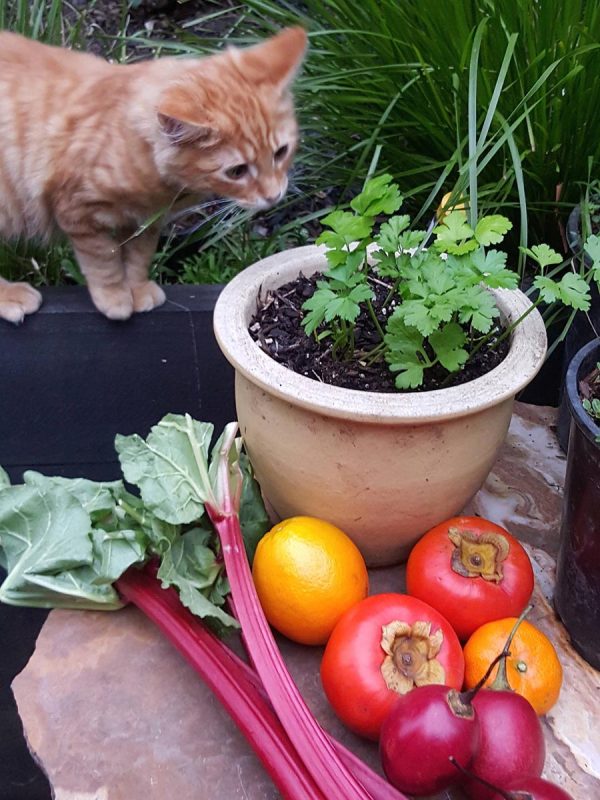 When I get exhausted I nap on my red blankie 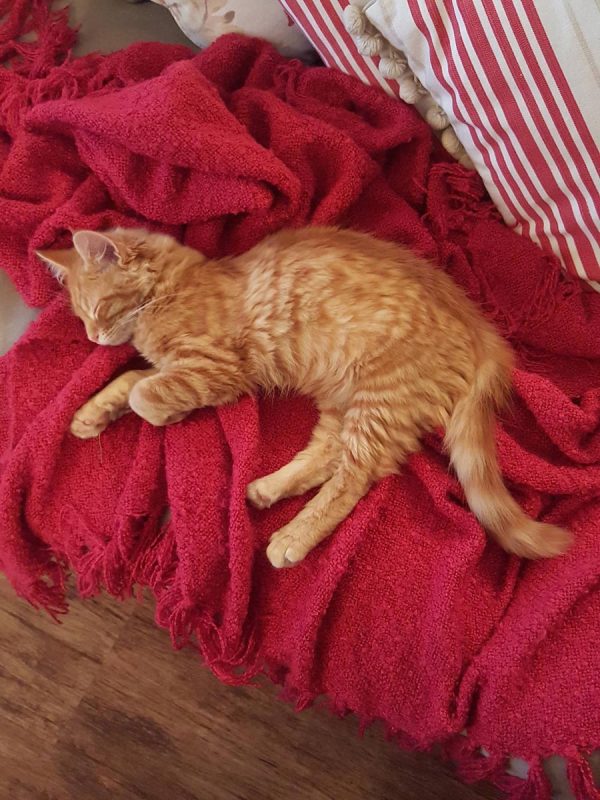 Oh, another thing … the fluffy cream mat is rolled up in the corner of the room. I’m still not allowed on it, although when she is out – and I’m allowed everywhere now except the bedroom – guess where I sit? Of course! On that mat! When I hear the car, I just hop off and wait at the door all innocent like. HaHa. In its place is this thin cream mat, nowhere as nice, and not plush like the other one. But I’m allowed on it. It seems I’ve created quite a dilemma by piddling on that fluffy mat and I don’t know if it is ever going to come right. Have you got any ideas? I think mum tried white vinegar and warm water, then bicarbonate of soda, then Sard soap and sunlight, but nothing has taken the yellow away. I’d like to set things right, so if you can get back to me with any ideas I’d appreciate it. Just drop me a line in the box below.

Ok. Gotta go now and chase my tail, just like you guys!