My two favourite food groups sharing a plate (um, aren’t potatoes and tomatoes food groups? I mean, I eat more of them than anything else!). Yes, I am an absolute potato fiend and I eat tomatoes practically every day. This dish is the stuff of my dreams.

Here’s how I did it … I cooked up a whole box of freshly-dug Oamaru Jersey Bennes (a specialty of a special region in New Zealand) … but not even I could eat an entire box (I tried), but it seems to me while you are faffing around and using gas or power to cook some spuds you may as well cook some for a second meal (conserves energy while providing more energy later!). When you store cooked potatoes it is imperative that they are dry before you pack them away. I put a layer of paper towels on top of the potatoes to absorb any moisture they give off (it stops them from going slimy).

Chop them up, put them in a shallow roasting tin with some very large and very beautiful tomatoes – and in New Zealand you can get no better than Curious Croppers‘ top produce – sprinkle with herbs (I used marjoram, basil, thyme and added a few fresh bay leaves, too), drizzle with plenty of beautiful life-giving extra virgin olive oil, season with flaky sea salt and freshly ground black pepper and bake the bejeesuz out of them. Well, until gorgeously golden. I didn’t even turn them over during cooking, such is my busy life.

Then sit in a corner away from everyone else and eat as much of this as you can. That’s what I did! But as none else was around to share them with, I found a sunny corner, sat on a chair and ate my fill. If you live with people, be prepared to share (drat!). 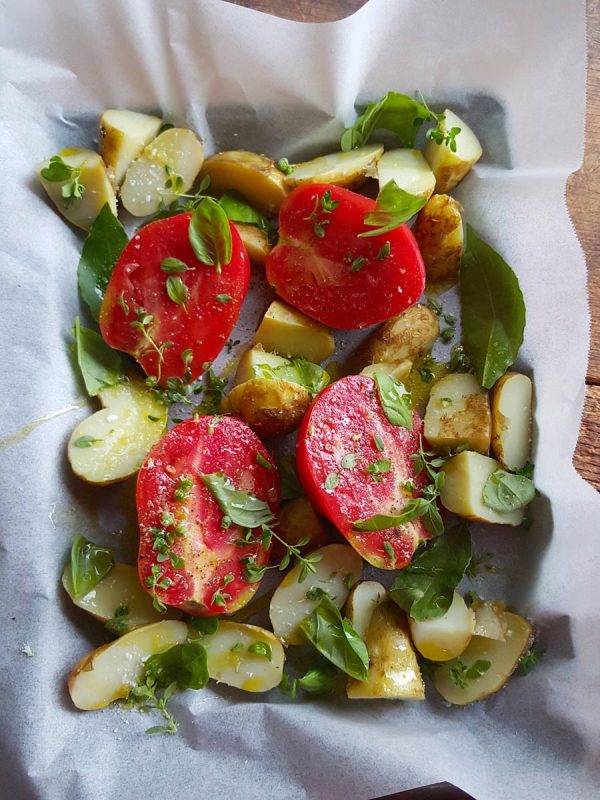 Roast Pork with Mustard Crust
Pork and mustard ... get some Brussels sprouts on, crunchy spuds ... and you're good to go. Read more
White Peach Salad with Barbecued Chicken Thighs
White peaches, chilli and lime ... sounds pretty good to me. Read more
Lemons
A cook's best friend – lemons add a burst of tingly freshness to savoury and sweet dishes. But which one's a Meyer, and which one's a Lisbon? Read more