Barley’s as old as time, my mother used to say. Her thick vegetable and barley soup was legendary, in our family anyway, and it nourished us through many a cold winter. A warming cup after school, a restorative mug or two after Saturday sport, or a Sunday supper with stacks of hot buttered toast, whenever it was served it was always longed for and appreciated. It was the smell of the barley cooking I loved the most, slightly nutty and sweet, and farinaceous, melded with the image of my mother at the stove, stirring the soup, and the anticipation that I’d soon be warm to my toes with a steaming bowl of tasty soup to devour. Food can do that to you, make you feel loved, contented, satiated, warm … and terribly nostalgic. Yes, I catch myself drifting back to those childhood days when everything was so simple, so easy, with nothing more than a pot of soup in my sights, when I make my mother’s soup. I allow myself a couple of goes at it every winter and enjoy the reminiscing. Barley has become one of my favourite comfort foods, not just cooked in soup, but added to a stew, threaded through a roasted vegetable salad or steamed in a pilaf. Sometimes I eat it sort of, um, nude. No! Not IN the nude, just pretty well unadorned, with not much else. You know those winter nights, ferreting around the fridge hoping to find some half decent leftovers to warm you up … a spoonful of cooked barley, a slosh of broth or extra virgin olive oil, a shower of parmesan and a few flecks of pepper – that does it for me.

The Internet tells me that the oldest remains of barley are at Tell Mureybat, Syria, a site dating from about 8000 BC, and I am inclined to believe this because the esteemed food historian, the late Alan Davidson, mentions this in his splendid reference tome The Oxford Companion to Food (Oxford University Press, 1999). The Internet also tells me that in July 2016 the genome of Chalcolithic barley grains is the oldest plant genome to be reconstructed to date. The 6,000 year-old seeds were retrieved from Yoram Cave on the southern cliff of Masada fortress in the Judean Desert in Israel, close to the Dead Sea. Barley’s as old as time? No, not quite, but indeed truly ancient.

A staple food for millennia, barley was replaced by wheat over time because wheat contains more gluten and makes a more palatable loaf; bread made from barley alone tastes good but it’s dense and coarse in texture, and dark in colour. Wheat also contains more protein than barley, and it makes whiter bread. Dark bread was for the poor, white bread for the rich. That’s been turned on its ear this century as we now pay three times the price for a richly smelling dark coloured loaf full of whole grains that has risen naturally, and that keeps well without any additives, than we do for a loaf of white bread made from highly processed bleached flour with additives, stabilisers and fast rising agents thrown into the mix (it’s hardly surprising that so many of us have an uncomfortable reaction to bread; it may be that over processing, artificial raising agents and additives are part of the cause, not just gluten). 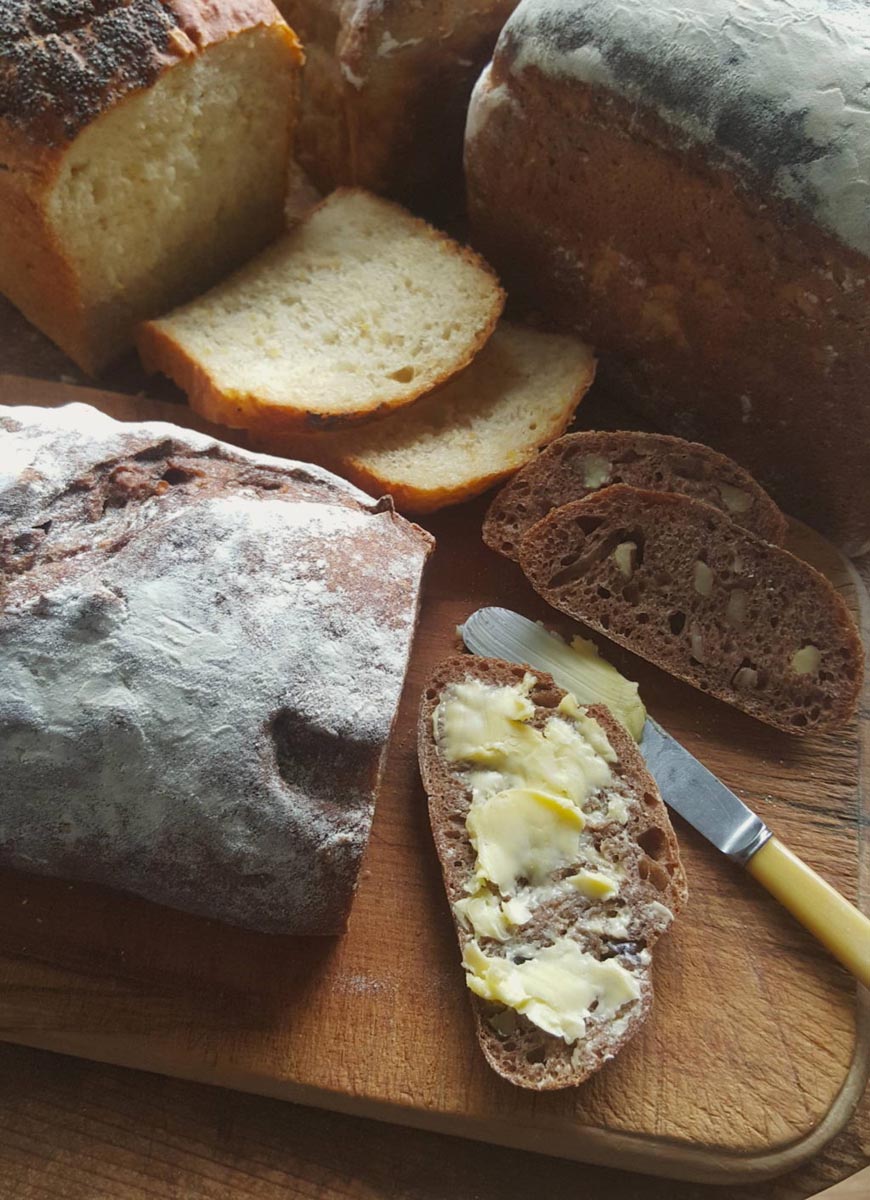 Artisan slow-ferment wholegrain breads from Ringawera Bakery, Waiheke Island. Most of the breads are made over a 2-3 day period which includes a pre-ferment and slow proving.

Hulled barley, also known as black barley because of its colour, is known as a whole grain and is the most nutritious form of barley – it’s actually a super-food (one of those foods that provides numerous health benefits). Hulling removes only the tough outermost hull (husk) of the grain, leaving all the nutrients – specifically the bran layer – intact. Hulled barley is best soaked before cooking to shorten the cooking time and ensure even cooking. Before soaking, put it in a sieve and rinse thoroughly under running water. Soak for 1 hour in cold water to cover, then drain and add to a saucepan and cover with fresh water. I use the ratio of 1 cup of hulled barley to 4 cups of water. Bring to the boil, lower the heat, cover pan with a lid and cook gently until tender (leave the barley with some chew). Drain and rinse with plenty of warm water, then drain in the sieve for 10 minutes before using in salads or vegetable gratins, or stuff into vegetables and bake. I’m not keen on adding hulled barley to a pot of soup because it gives off a sludgy grey residue and the soup loses its bright colour. Although I haven’t tried it, I’ve heard it cooks well in a rice steamer. You will find it in specialist health food stores, usually sold as black barley.

The most common form of barley is pearled barley (known as pearl barley). The outermost hull is polished away, making a product that is quicker to cook and less chewy to eat, but the bran layer is usually removed in this process, and sometimes the endosperm, reducing the nutrients. Look for coarse pearl barley that is a little dusty and creamy brown in colour rather than clean and perfect polished barley grains because the former will contain more goodness. New Zealand grown barley is a great option (you can find stockists of NZ Biograins’ Canterbury-grown barley on line).

As a guide, 1 cup raw pearl barley requires 2¼ cups of water to cook and swells to approximately 4 cups cooked barley. Put water and barley in a saucepan, cover with a lid and cook on the lowest setting (use a simmer mat if you have one), for about 45 minutes, until sort of tender – it should have a nice little chew to it. The worst thing you can do is to cook it to a mush. One important tip – wash the barley under running water in a sieve to rinse off dust just before cooking; it’ll clump together if washed ahead.

Barley flakes are similar to rolled oats and can be made from hulled or pearl barley. Use as a cereal like porridge or in muesli, in baking and in place of breadcrumbs in stuffings, or just add a handful of flakes to a soup or stew during the last 30 minutes of cooking to help thicken the dish and to make it more nutritious. Barley flour can be used as a thickener for vegetable or meat soups, stews or casseroles. It can also be used to make a pizza base in place of wheat flour. Barley bran can be used in biscuits and other baking. You will have to read the nutritional breakdown on the packets of such products to see whether they are made from hulled or pearled barley. 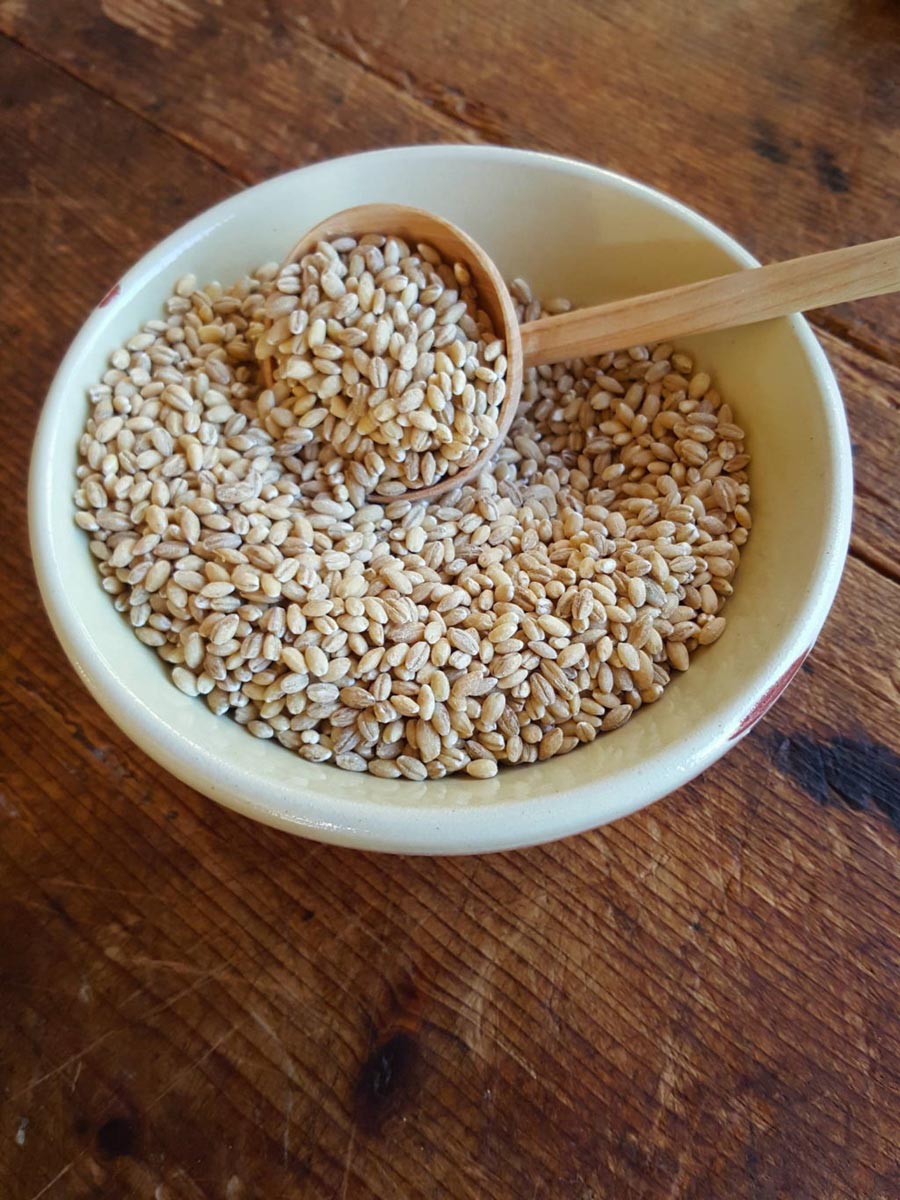 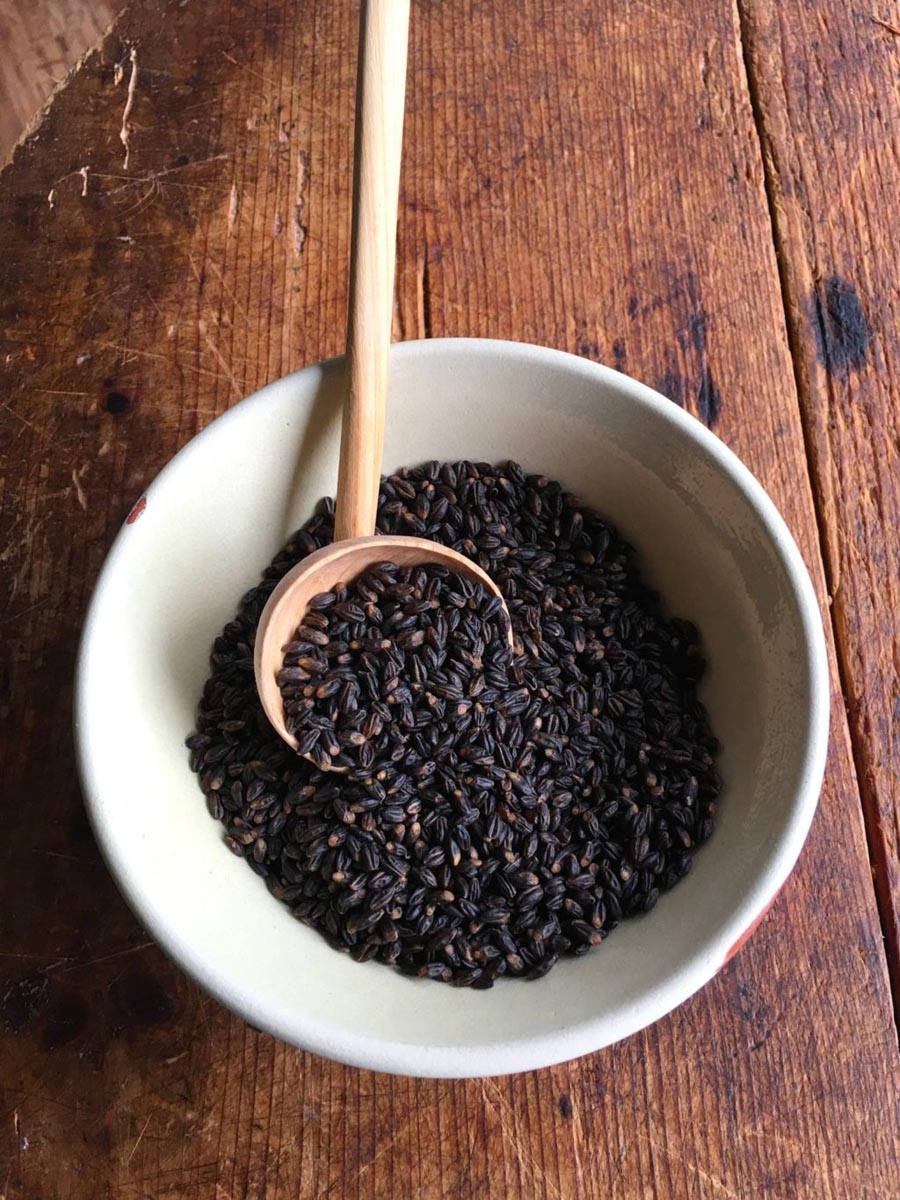 Preserved lemons
Preserved lemons (salted lemons) are a much-loved condiment in Moroccan and other North African cuisines. It is more common to use the rind rather than the flesh, although both rind and flesh can be added to stews or long-cooking dishes. Preserving your own lemons is easy! Read more
Vegetable & Barley Soup
Take it to work, have a mug of it after school, or make a meal of it. Read more
Black Barley Salad
Does black barley sound like it has been charred or smoked? Has it? Nope. It's barley pretty well in its natural state with just the outer skin removed. Read more