Here’s a round-up of some of New Zealand’s feta cheeses. The wide scope of products, from north of Auckland to the bottom of the South Island, shows that feta making is alive and well right around the country! The last two cheeses in this tasting are not made in New Zealand, although I always assumed they were until I read the labels for this tasting. Shock! Horror! Galaxy Creamy Feta (Mainland) and Mainland Creamy Goats’ Milk Feta are both products of Denmark. Well, damn, they do tell us to read labels … but somehow I’d just never thought ‘Danish style’ meant made in Denmark. It’s even more confusing because the Mainland Crumbly Special Reserve Feta is a ‘Greek style feta’ but made in New Zealand.

Galaxy Creamy Feta is a staple in our house, as fussy daughter Ilaria prefers it over others. Does she care it’s made in Europe? Nope. Do I? Well, yes, maybe. We’ve got a really active cheese industry in New Zealand with lots of small cheesemakers entering the fray, and if we want to be able to enjoy some of the delights that this tasting showed up (the likes of Zany Zeus, Hohepa, Origin Earth, Cranky Goat and Blue River), we better buy their products or they’ll go down the gurgler. There’ll be no point complaining then.

There are many styles of feta from firm and dry to moderately creamy to very creamy. Some crumble, others flake, some are soft enough to squish on bread. Mass produced fetas seem to rely on salt for flavour. There’s nothing wrong with that – sometimes a dish is vastly improved by adding a sprinkle of salty feta. And if a feta is simply too salty to enjoy, soak it in cold water for 1 hour, or overnight, and leech out the salt. Artisan cheesemakers seem to draw more flavour out of the milk, developing tangy lemony, sweet boiled milk and rich cream and nutty flavours. These cheeses are a triumph and are best served on their own with nothing bar a glass of something decent. 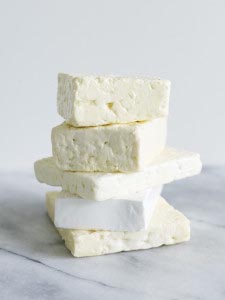 Pineapple – Easy to prepare when you know how
Removing the eyes (little pesky bits) from a pineapple, and the core, ensures a tender mouthful of juiciness with every slice.
The remarkable date
Dates are seriously good for you. True!
Chicken with Spanish Flavours
Whoop-de-whoop! Chicken, chorizo, smoked paprika, char-grilled red pepper, orange & olives ... all you need is a fork!
Cabbage & Apple Slaw
Chop Chop! Make the most of inexpensive seasonal ingredients to add tangy crunch to your dinner.
Pancetta – get it sizzling!
Hard to resist ... nuggets of golden salty deliciousness!