Stronger and more acidic than lemons – limes contain around one-and-a-half times the sourness of lemons depending on the variety – the concentrated citrus oil in their skins is used to flavour edible oils, marinades and sauces, confectionery and baking.

I am no expert, but what I understand is that there are two common varieties of limes: Key limes (also known as West Indian or Mexican lime, and as the true lime), and Tahitian lime (also known as Persian or Bearss lime, (pictured left in photo) which is most likely a hybrid. 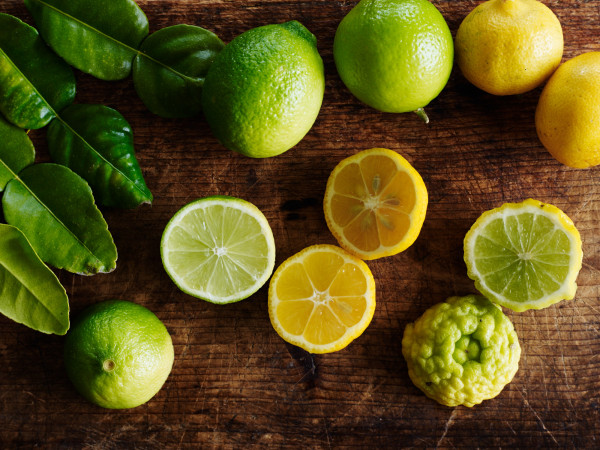 It’s a bit of a muddle, but the true lime made its way from Malaysia, where it probably originated, to the West Indies and Central America, taking its name from the places where it was heavily cultivated (the name key lime comes from Florida Keys).

A hybrid of the true lime, most likely a lime and citron, made its way via Persia to the other side of the world, to Tahiti, then on to the US. It became known as the Tahitian or Persian lime and in the US as the Bearss lime. To confuse things further, in Iran the main lime is the true lime, not the Persian lime.

Key limes grow on thorny trees and are harder to cultivate and harvest than Tahitian limes. They usually have seeds and a thin rind and are picked when green or yellowing. They are small compared to Tahitian limes, and more sour. Tahitian limes are as big as a Lisbon lemon and are usually picked green to save confusing them with lemons, of which they resemble.

I discovered another type of lime growing in my friend Tessa’s garden on Waiheke (these are the yellow limes in the picture) this winter. We think they must be Indian sweet limes. These are different to sour limes, having a lime fragrance and lime oil in the skin, but there’s no acidity in the juice. They’re popular in India and the Middle East.

Regarding kaffir limes (warty looking fruit on the right of the picture), well, here’s a thing, usually they are not much good for anything bar grating, but this year my tree produced very juicy kaffir limes (pictured). The zest was oily and powerful and the juice was sharper than usual lime juice, and the smell heady and medicinal, almost overbearing. Not what I was expecting!

Also see kaffir lime leaves (on the left in the picture).

Limes can be used in many of the ways we use a lemon: as a tenderiser, in marinades, to deglaze the pan after pan-frying fish or chicken, to add a little zing to baking, as a souring agent in curries or spicy dishes, and to bring a fresh note to oily dishes such as salmon. But they do have their own character and if replacing lime with lemon in a recipe, you may need to add a little more of it to balance the sourness. Limes should look shiny, feel slightly oily and smell fragrant when fresh. They will store a few days in the fruit bowl, or up to 3 weeks in the vegetable crisper. Get the most out of limes by warming them before juicing – a 10 second blast in a microwave will do it – (see Lemons). Pickled limes can be used in the same way as pickled or preserved lemons, in stews and meat and fish dishes, or whenever a sharp tang is called for.

Kiwifruit Salsa
A handy little salsa to add a juicy sweet hot bite to your meals - try it spooned into the hollows of halved avocados. Read more
Cake time!
Bake a cake = Make friends! Read all this week's news and views here. Read more
Grab the last of the strawberries before they’re gone!
Pretty, summery, fresh and so moreish, a Rosé spritzer will see you drink less alcohol but have double the fun! Read more