I wrote this article for a magazine in 2008. I’ve left it as is, unedited, so some of the facts may be dated, but the crux of the matter remains: beware of bargains as there is no such thing as a cheap prawn, and the information on preparing and cooking prawns is still relevant. And there is plenty written about the subject online

Have you been wondering why prawns have got so cheap lately? Unfortunately, the answer may alarm you: paddy fields have been converted to prawn breeding grounds in several Asian countries, and while the race is on to produce the biggest fleshiest prawns in as short a time as possible, there is little control over the cocktail of growth stimulants, antifungal agents, antibiotics and pesticides used to grow them.

Apart from Asian imports what else is on offer here? Prawns breed and grow in warm water which makes farming prawns in New Zealand too costly, although one company is actively involved in the venture:

Huka Prawn Park by the Wairakei Power Station north of Taupo. While breeding prawns close to a power station might not sound very romantic, it is key to this operation. In layman’s terms, Huka Prawns use huge heat extractors to extract heat from excess waste water from the power station, water which is too hot to be put back in the river. The heat is then used to warm up fresh river water for pumping around the prawn farm. The company imported 50 breeding pairs of Malaysian river prawns in 1987, choosing these over native koura because they reach maturity in 6 months while koura take 2 years. They now have 19 prawn ponds and produce 25 tonnes of prawns annually, 97% of which are sold on site at the restaurant which forms part of the Huka Prawn Park complex, while the rest are sold direct to the public or to restaurants.

Delking, a family-oriented business established here 17 years ago offer something different again. They bring in ‘sea-caught’ prawns, mainly pink banana and tiger prawns, fished from the warm waters between Australia and Indonesia by small fishing vessels which they assign to the task. The prawns are kept on ice until they’re brought to shore and processed, without chemicals, then frozen (the day of the catch). The texture is superior to farm-reared prawns, meaty, with a little bit of bite, and while not as sweet as farm-reared prawns, they taste more like what they are: prawns! They are marketed here in supermarkets and sold at Mad Butcher stores as ‘Wild Caught’ prawns to differentiate them from other imported or farm-raised prawns. You can expect to pay a little more for them than Asian imports, but you’ll know you are getting a natural product free from chemicals, salmonella and heavy metals.

Australian prawns are also highly regarded by prawn-lovers and aficionados. Chemicals are banned from aquaculture in Australia, although prawns caught in the wild may be sprayed with a mild bacterial retardant as a precaution. Trawlers may stay at sea for 2-3 weeks and much of the catch is snap-frozen, maintaining the quality.

Now you know what you are buying, the choice is over to you: prawns as cheap as chips, raised in a perpetually recycled chemical soup, or New Zealand or Australian farm-raised prawns, or wild-caught prawns swimming in their own habitat? 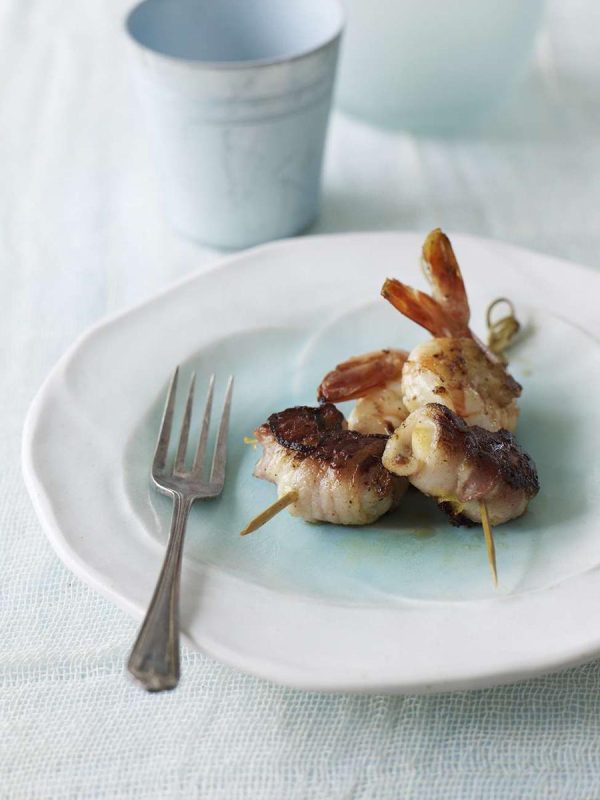 Most prawns are snap-frozen at sea, or just after catching, or kept in an ice-slurry until the boat reaches shore, then frozen, so most of the prawns sold here will be frozen. Frozen prawns will keep for several months in the freezer after which time they start to loose condition. Some recipe books will advise to thaw frozen prawns slowly in the fridge, but prawn experts will tell you otherwise – thaw them quickly to preserve moisture, flavour and texture. This is easily done by putting the prawns in a sealed plastic bag (if they are not already in one), and immersing the bag in a sink of hot water; the water should not be boiling, just hand-hot. As the water cools, change it, until the prawns are no longer stiff. They do not have to be completely thawed in the water as they will continue thawing as you rinse and pat them dry and start the recipe. Some recipes suggest thawing prawns in warm water without the protection of a bag, but this can result in loss of flavour.

There are two main points to make here: prawns are quick to defrost so why would you buy defrosted prawns that may have been hanging around defrosted for a day or two (you can’t tell when they were thawed just by looking at them), and it is also impossible to tell how they were defrosted. Remember, also, that seafood quickly loses condition at room temperature. The equation is one hour at warm room temperature is equal to 24 hours of refrigerated life. Thaw your own then you have control over these factors.

Prawns are sold either raw or cooked. Again, you don’t know how they were cooked and you can’t tell when they were cooked just by looking at them. It’s safest to cook them yourself. And, if you are intending using prawns in a hot dish, buy raw prawns or the prawns end up being cooked twice which can make them dry or rubbery.

Prawns have a digestive tract running the length of their bodies and this is sometimes visible as a black or orangey vein. It won’t make you ill if you eat it, but it is gritty on the teeth and can be off-putting. If it is visible, it needs to be removed. Run the tip of a small sharp knife down the back of the prawn and pull out the vein, then rinse the prawn. It is sometimes possible to pull the vein out from the tail end of the prawn without slitting the back (easier to do if the shell has been removed). Some prawns you buy have had the digestive tract removed.

For casual eating you can’t beat a clutch of glistening prawns in their shells sizzling on the barbecue. They can be cooked like this in their shell with their heads on, or in their shell sans tete! All you need are water bowls with lemon wedges, paper towels and a bowl for the shells. Another popular method is to remove the head and shell leaving the tail end of the shell attached, or the whole lot can be removed – it depends on their end use. If they are to be mixed into a risotto, for instance, they need to be fully shelled because unexpectedly biting prawn shell can be a bit alarming, but if they are going on top of the risotto, as a garnish, the tails can be left on for effect. These prawns can then be eaten in the fingers before tucking onto the risotto by nibbling the prawn meat while holding the tail shell then sucking the last little bit out of the shell. Provide a bowl for the tail shells.

Prawns can also be ‘butterflied’ in the shell. Twist off the head, cut the flesh through the rounded back of the prawn using a small sharp knife, remove the vein if it is there, then gently press prawn flat with the hand. Brush with oil or garlic butter and grill, panfry or barbecue. It’s easier to grill and barbecue prawns if they are threaded onto skewers. Either thread one prawn lengthways onto each skewer, or line up several prawns together and skewer with two or three skewers going through the row of prawns. Grill prawns shell side up to begin, then turn and brush them with melted butter or oil flavoured with herbs, garlic or spices.

Prawns can be pan-fried, grilled, barbecued, cooked in a curry, used in risotto or pasta dishes, served nestled into omelettes, cooked en cocotte, or cooked a zillion other ways. There is one technique though, which beats all others. It is called velveting, which results in silky prawns. Popular in Chinese cookery, velveting preserves flavour and prevents delicate foods from overcooking or drying out. The prawns (500g / about 1 pound) are massaged for 2 minutes with a mixture of cornflour/cornstarch (2 tablespoons) and bicarbonate of soda (½ teaspoon), massaged again under gently running cold water for 2 minutes, then patted dry and cooked according to the recipe. Other recipes call for egg white or oil, but the aim is the same.

Now the good thing is that I’ve got to the end of this feature without using clichéd expressions such as ‘throw another prawn on the barbie’ or ‘don’t come the raw prawn with me baby’. Drat! I just wrote them, so now they’ll stay! On a more sobering note, if you want to find out more about Asian prawns, go on line and read Alex Renton’s investigative journalism for the Daily Mail (3rd October 08) and The Guardian UK (or Google ‘Is your prawn cocktail toxic’ or ‘Alex Renton on Asian prawns’).

Coconutty Spicy Prawns
Coconutty spicy prawns – what's not to like! Read more
Caveat Emptor! Not all prawns are created equal
Get them sizzling! Read more
Prawn, Pink Grapefruit & Watermelon Salad
Aussie prawns. Yeah. Best in the world, I reckon. Stick them on top of a juicy watermelon & lime salad and you'll have your own little bit of magic right there on a plate. Read more