Celeriac is cultivated for the fleshy root which grows under the soil, although the green celery-like leaves sprouting out the top can be used to flavour soups and stocks. It’s hard work to peel off the thick skin as the roots are often imbedded in the flesh, but you’ll find a strong knife with a deep heel (the heel is the part of the blade by the knife blade) makes it easier. Once it is peeled it needs to be plunged into water with a good squeeze of lemon juice, or rubbed with lemon juice, to stop it going brown. But it’s worth the work as celeriac has incomparable flavour, possessing the fresh nip of its botanical cousins, anise and parsley, and all the earthy flavours of good fresh celery, but without bitterness. Don’t bother buying small ones which will have a disproportionate amount of skin and roots, or large ones because they often have woolly centres. Look for a medium-sized root and one with the least amount of matted roots because it’ll be easier to peel. You might prefer to first cut the celeriac into quarters so you can see how much skin you need to remove. Keep the board and knife clean if dirt is present, wiping as you go. 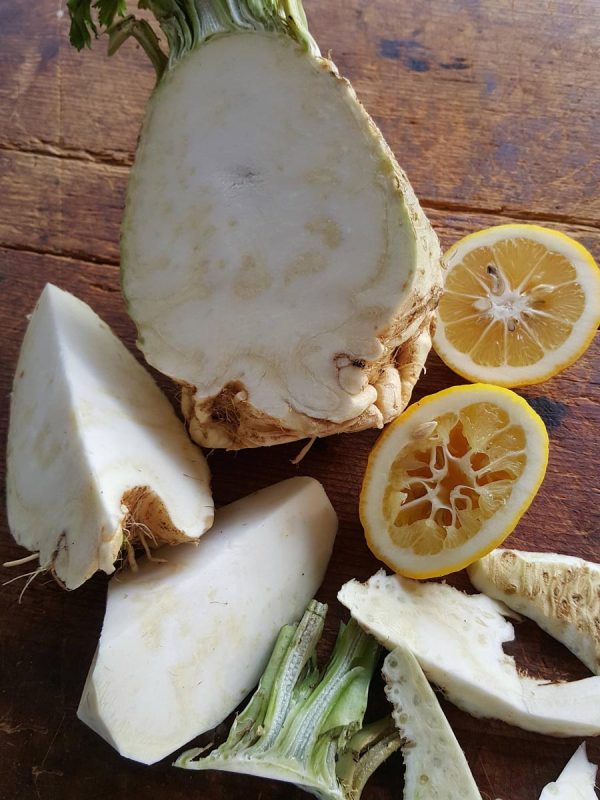 Celeriac will keep for several weeks in the vegetable crisper, unwrapped. The cut surface of unused celeriac should be rubbed with lemon, then the celeriac should be wrapped tightly in plastic food wrap and refrigerated until required (simply cut off any browned pieces before using).

Celeriac’s good for you. It has no fat (though is best with added fat) and has plenty of soluble fibre, a good dose of vitamin C, along with calcium, iron, folate and potassium. It makes a delicious salad, grated, shredded or cut into julienne strips, drenched with plenty of sharpish vinaigrette to add contrast which also stops it discolouring. And its texture, which falls somewhere between a crisp apple and an early season parsnip, is sensational enrobed with a good mayonnaise or creamy dressing.

To make the famed French dish celeri remoulade, mix 1 cup good mayonnaise with 2 teaspoons Dijon mustard, 1 teaspoon each chopped gherkins and capers and 1 teaspoon chopped parsley. Add some chervil, too, if you can get it. Cut celeriac into matchstick-thickness julienne, either by hand or with a machine, then toss with remoulade dressing. Serve with ham or ham steaks, snitzels, roast chicken, that sort of thing.

For a change, use half celeriac and half regular beetroot for a colourful salad. 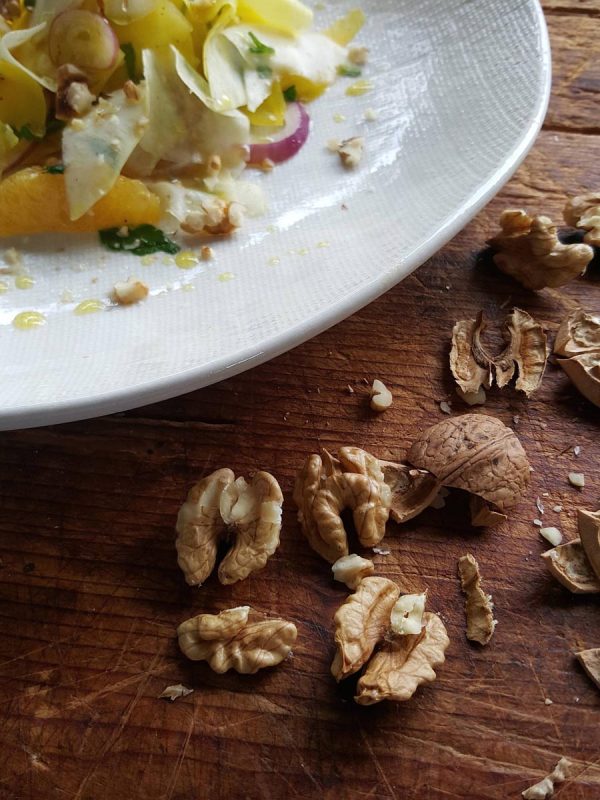 Easier still, if you have a perfect specimen, serve thick slices with a good dry aged cheddar, the sharper and tangier the better, along with olives and gherkins, and sliced chorizo or garlicky salami, as a nibble platter with wine.

Celeriac is especially good in a bubbling creamy gratin with potato, cream and garlic – just make sure the slices of celeriac aren’t too thick and that they are well covered with sauce. Season the gratin with freshly grated nutmeg or Dijon mustard, or flavour it with thyme, rosemary or sage. Instead of a creamy cheesy sauce, make the gratin with a homemade tomato sauce and try a mixed vegetable combo adding pumpkin and red onion, and topping it with cheese and crumbs. Celeriac loves bacon, too. While you can make a celeriac mash, it takes a lot of celeriac to get volume, and it can sometimes turn grey and watery. A better result, (because it is easier to mash, and it costs less) is made by combining potato and celeriac. Cook the vegetables separately, drain well and dry them off in the saucepan over heat for a few minutes. Mash potatoes first, then the celeriac, and mix together enriching with butter and hot milk or cream. True, you make double the amount of washing up, but the result is a fluffy, pillowy mash, with a pronounced nutty celery-like flavour. You could whiz the celeriac in a food processor, but not the potato because it will go gloopy if subjected to that treatment. Back to the bacon… top the mash with little nuggets of salty crispy-fried bacon and you will create a masterpiece. Scoff it on its own (it’s hard not to!), or serve with roast chicken, or a gorgeous wintry stew. 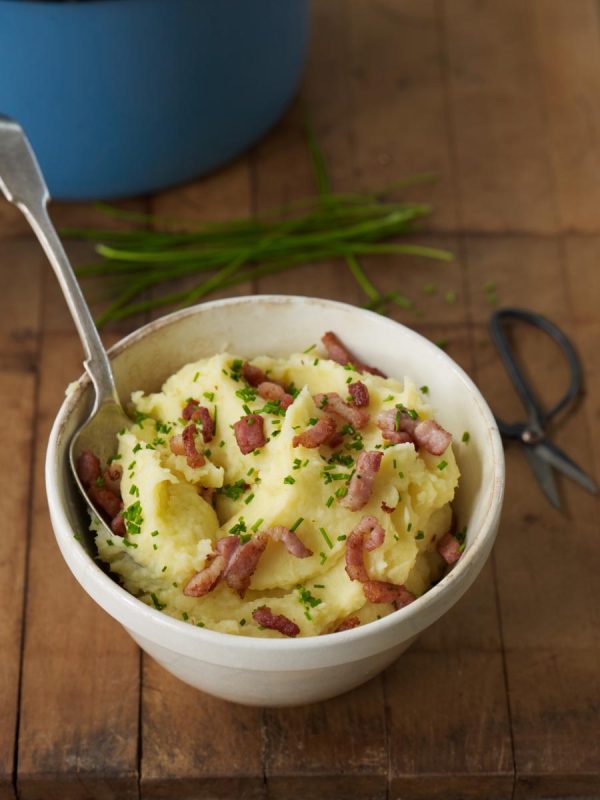 You can also jiggle the flavours of the mash. Add snipped chives on top, of fleck them through the mash. Add some grated nutmeg, use smoked sea salt as a flavouring, or top with aforementioned crispy bacon nuggets AND crispy-fried sage leaves. Yep, pork would make a great plate mate to this, perhaps a pork fillet stuffed with plumped soaked prunes and lemon zest (I know, I know, piggy with piggy!).

I’m not done yet: toasted walnuts, plain or seasoned with sea salt or spiced chilli salt, are another fab addition, especially good with roast beef.

A little cooked celeriac crushed with a fork, with the addition of butter and garlic, and parsley, chervil or chives, served with a fluffy apple purée and a topping of toasted walnuts, is another good choice to serve with beef and pork.

Celeriac fries well due to its starch – it makes excellent thin crisps deep-fried in olive oil and sprinkled with sea salt – and it roasts well, but will become dry and rubbery unless it is coated in fat. For roasting, use olive oil, but use butter for pan-frying to help it colour more readily.

Celeriac has quite a powerful lingering flavour which makes it a good flavour bomb for soup, whether it be one based on chicken broth or a vegetable soup with plenty of other vegetables and herbs. For a fancier soup, sizzle up some bacon, add in black garlic, and plenty of it, a little smoked paprika, then potatoes and celeriac, and stock, (chicken or vegetable). Bubble up and cook until vegetables are tender. I like to crush half the soup with a potato masher, leaving it lumpy, and to finish it off with cream or crème frâiche and snipped chives. Large toasted croutons made from grainy bread are a good accompaniment. (You could whiz the soup in a food processor if you prefer.)

And, finally, try it simmered or braised with carrot and parsnip, then finish it with a shower of chopped parsley and serve with beef or lamb stew, then sniff the air – it’ll transport you to a French country kitchen. Nothing wrong with that. 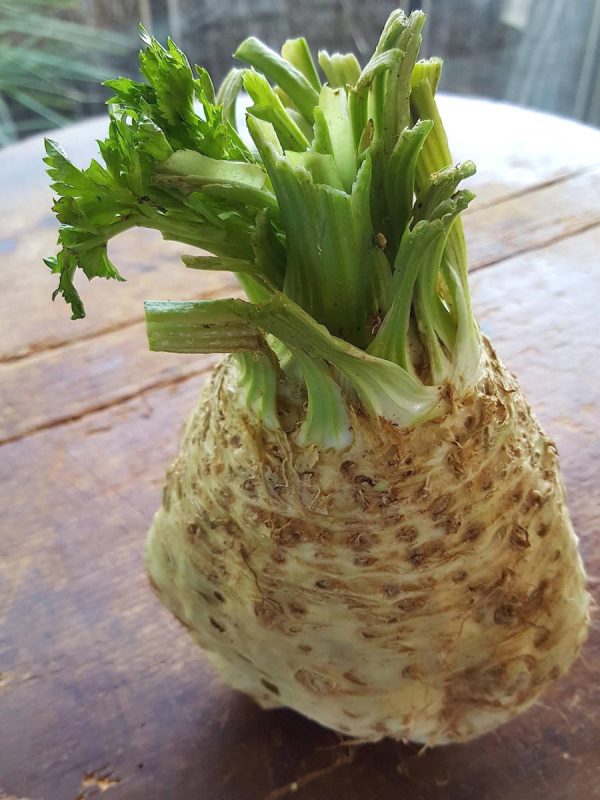 Celeriac & Beetroot Salad
Crisp, crunchy, nutty, tangy, all the elements to excite your palate before a fancy-pants dinner. Read more
Hot Smoked Salmon & Celeriac Gratin
Whoa, steady on! This is rich, as in old-fashioned Frenchified rich, dripping with cream. Read more
Potato & Celeriac Mash with Crispy Bacon
Pillowy mash with little salty nuggets of bacon – go on, make it, you know you want some! Read more