Kumara has been grown in New Zealand since the Maori brought them here from Hawaiki more than 1000 years ago. An important crop for Maori, the frost-free conditions and higher temperatures of Northland proved to be the perfect combination to grow successful crops. However, the traditional bushy varieties were supplanted by a new American hybrid during the 1850’s and were the forerunner of our main crops today.

Although there are around 400 varieties of kumara, we grow three main crops in New Zealand:

Red kumara (Owairaka Red) has red-skin with a creamy white flesh which is often veined.

Gold kumara (Toka Toka Gold) has golden skin and flesh, is sweeter than red kumara and has a denser flesh.

Orange kumara (Beauregard) has orange skin, and orange flesh similar to the colour of pumpkin, a nuttier flavour than the others and it’s the sweetest of all, but it has a shorter shelf life.

All three have a dryish texture, and are a little mealy and dense, akin to chestnuts.

And, there is the classic purple-skinned kumara, and several new varieties, including Purple Dawn which is purple all the way through.

Kumara is often referred to as a sweet potato, but it belongs to the morning glory (convolvulaceae) family, and not, like potato, to the nightshade one (solanaceae). And it is not a yam! (Yams belong to the lily or dioscoreaceae family.) The modern kumara plant is a climbing vine, with tubers. The tubers are harvested during late summer and early autumn. Freshly-dug, they are hard and starchy, lacking their characteristic sweet flavour. They’re stored for several months before marketing, during which time their starch is converted to sugar. 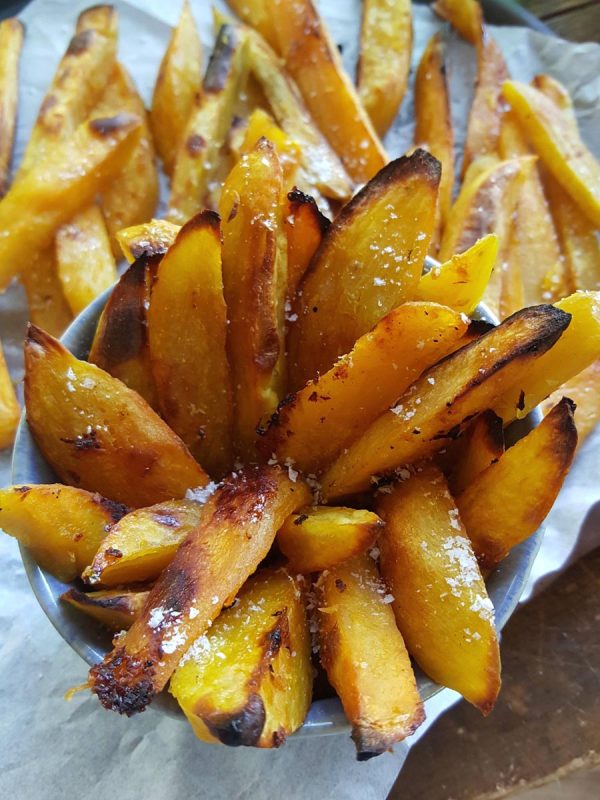 What to look for

Choose smoothish kumara, rather than knobbly ones, because they’ll be easier to peel. Kumara should feel firm, the skin should be unbroken and without blemishes.

Treat them gently, because they bruise. Don’t refrigerate kumara because chilling them below 10°C changes their make-up, making them shrivel or develop a hard inedible core. Store kumara like potatoes, above 12°C (53°F), but not above 18°C (64°F), in a well-ventilated area. If the temperature is too warm, they’ll sprout, and if it is too humid, they’ll rot. It’s got to be just right!

Complex carbs and much more

Kumara has heaps of Vitamin C along with some Vitamin E and B6, and is a good source of potassium, iron and calcium. There’s plenty of soluble fibre, too, mostly in the skin. The flesh of orange-skinned kumara is rich in B-carotene, and the skin contains some, too, but in a lesser degree. Purple and red varieties also contain antioxidants in their flesh but have a higher concentration in their skins. Best to eat some of all three colours!

*It’s better to steam kumara rather than boil them. They’ll retain more flavour, and more nutrients, and keep a drier, firmer texture.

*Kumara cook faster than potatoes, so boil or steam them separately.

*Baking and roasting kumara brings out their natural sweetness. Even though you don’t need to make them any sweeter, there are plenty of recipes calling for additional sweet ingredients such as brown sugar and maple syrup. Watch American recipes– you can usually cut the sweet stuff back by 50%! 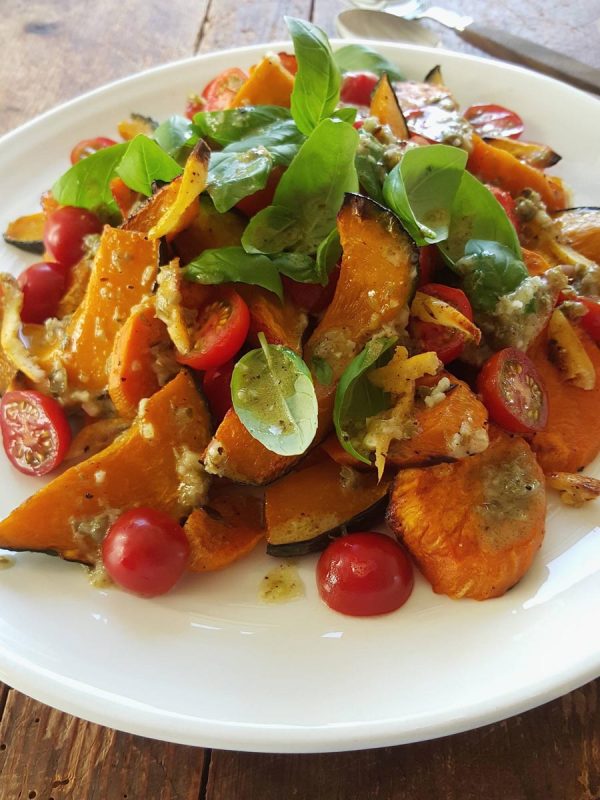 How to use them

Kumara can be steamed, boiled, baked, roasted, fried, barbecued and cooked in the microwave. They can be turned into mash and used as a pie topping or made into fritters or pan-fried cakes. They can go in pies, frittatas, curries and soups, or, perhaps best of all, simply roasted until golden and crunchy.

*To bake in the skin, prick the skin and cook for about 1 hour in an oven preheated to 180°C (350°F). To bake in the microwave, prick the skin and cook two kumara at a time on High for 6 minutes, turning them halfway through cooking. Top jacket-baked kumara with sour cream and chives, or with a dollop of chutney and sour cream, or, for a more extreme approach, top with diced pineapple, cubed cooked honey-roasted chicken and sliced spring onions (scallions) and dollops of mayonnaise. Serve with lime wedges.

*Make a kumara soup with orange-fleshed kumara on a base of chopped onion softened in butter. Only purée half the soup, so that it is chunky, and top with chopped fried bacon and snipped chives, or make a kumara and pumpkin soup spiked with ginger and fleck with chopped mint before serving.

*Add cubed kumara to vegetable curries but keep the pieces chunky adding them for the final 15 minutes’ cooking to avoid kumara breaking up.

*Make a frittata with barely-cooked cubed kumara, onion, garlic, flat-leaf parsley, eggs and grated parmesan, and serve with a spinach and radicchio salad.

* Digby Law’s kumara, pineapple, celery and mayo salad is part of New Zealand’s culinary heritage now – but put your own stamp on it by adding a little mango chutney and finishing with chopped salted peanuts or cashews, or add chopped red pepper (bell pepper/capsicum) and spring onions (scallions) to the mix.

*Make roesti, using gold kumara in place of potatoes, and including onion or ham, or both.

*Use kumara mash flecked with chives on top of a smoked fish pie, or on top of moussaka.

*Toss cooked cubed purple kumara with ground cinnamon, allspice, ground ginger and a pinch of ground chilli, then in melted butter and bake until golden, or roll in brown sugar before baking.

* Roast 3 colours together for a change and compare flavours.

*And if you have to, use kumara in muffins, sweet breads and cakes! 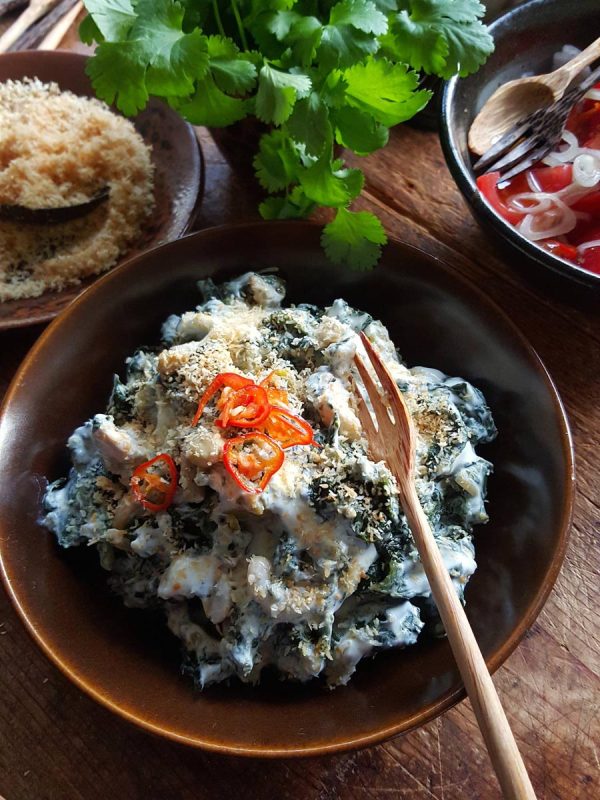 Roasted Pumpkin with Feta & Caper Dressing
Roast pumpkin glistening with a caper dressing makes a standout autumn lunch. Serving for dinner? Add a few extras such as fried pumpkin seeds and dukkah. Read more
Pot Cake
Pot cake? Yep, grab a pot and a spoon and away you go... Read more
Fennel – fancy things up with feathery leaves or pollen
If I could resist harvesting my fennel bulbs, they would have babies, slim fennel-ettes would start forming that I could pluck out leaving the plant to continue growing and forming more of the same. But I can't, of course. Read more