I love old-fashioned advice that’s based on fact. You know that sensible stuff you hated being told as a child but which later in life you realised was not just well intentioned but was well thought out. That’s getting old for you. Once you can see the sense in things, it’s all downhill.

Such is the story about sweet corn being at its sweetest when just picked. As soon as the corn is cut from the plant, the sugar starts turning to starch, so the sooner you get it in the pot, the sweeter it’s going to be. New varieties of corn retain the sugar for a little longer before it’s converted to starch, but speed is still essential; no amount of care or gentle massaging is going to resurrect withered corn cobs. The best corn is grown near you and hasn’t had to travel far. Avoid buying corn stripped of the husk and silk because these keep the corn moist. 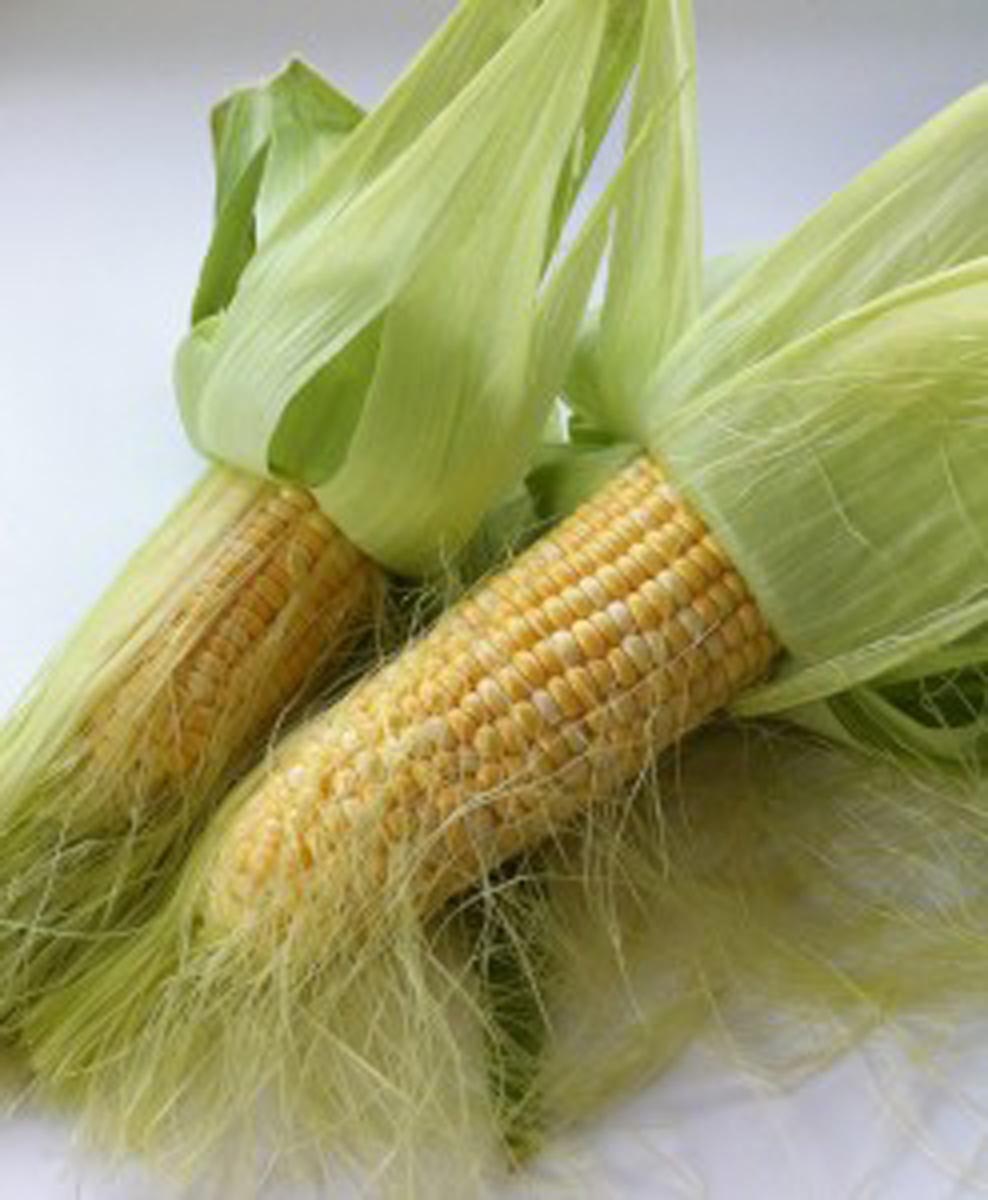 I recently read a piece on corn that I wrote 13 years ago, and that is, ‘If the butter thing worries you (a little bit of butter is never enough, is it?), try it drizzled with a fruity extra virgin olive oil – my ten-year-old daughter highly recommends it like this.’ I know it is 13 years since I wrote that as Ilaria is now 23. It was quite out-there at the time to dress corn with oil instead of butter, living as we do in a primary dairy-producing country, but she started her butter aversion quite young. You may be sceptical, because sweet corn and butter is a much-loved combination, but there’s something about the contrast of just-pressed extra virgin olive oil bursting with youthful exuberance. With its aromas of freshly-cut grass, fruity olivey-ness and peppery bite it shakes up the smug creamy nuttiness of corn and its hay-like aroma, makes it bolder, gutsier, more lipsmacking delicious. A smattering of chopped coriander, or even parsley or snipped chives, exaggerates the match even more. Then there is tarragon. Now, who in their right mind would have thought? … Until I tasted corn with tarragon I was none the wiser. But of course tarragon loves fat, just like corn, so they happily cosy up together.

Fresh corn is good for us, too. It’s a high carb food, with good quantities of vitamins A and B, and some C. It contains potassium, moderate amounts of protein and hardly any fat, but as we know, it tastes so much better slathered in butter, or doused in freshly pressed olive oil. It also works a treat with avocado oil, and makes a mean salad as such spruced with lime juice, sea salt, fresh diced avocado, and any of the herbs mentioned, or basil. Kernels shaved off fresh raw cobs and simmered in a knob of butter and a good jot of single cream for several minutes, then flavoured with tarragon, is mighty fine served on toasted English muffins and garnished with crisp rashers of fried bacon, or as a hot vegetable alongside a French roast chicken. 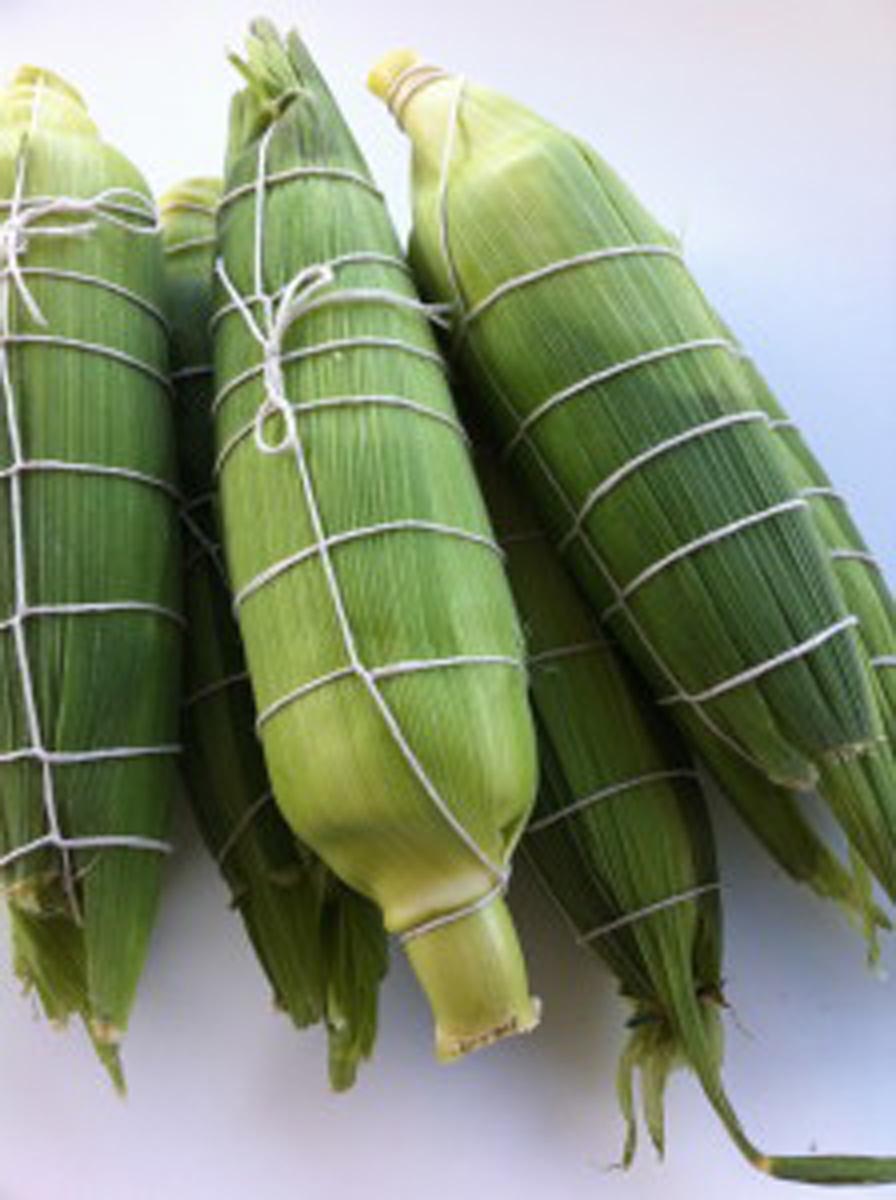 To cook cobs in their husks, remove the silks first. Pull down the husks leaf by leaf, remove silks, then rewrap cobs carefully; tie with string if necessary. Soak sweet corn in cold water for 15–30 minutes. Cook over hot coals for 15–30 minutes, turning often. The corn will steam and become tender. The moisture prevents burning but once the water has evaporated, the sugars will caramelise and develop a rich, sweet flavour. If you don’t have hot coals at your disposal, cook the sweet corn on a preheated, lightly oiled barbecue hot plate over medium heat. Splash the corn with cold water from time to time to create steam, and turn the cobs every few minutes. If the barbecue has a lid cook mostly with the lid down. Either way will take 25-35 minutes. Remove string and husks and sprinkle corn with salt and serve with butter or extra virgin olive oil.

While most of us enjoy eating corn on the cob, some people prefer it off the cob. That’s easily done; simply slice the cooked kernels off the cob with a sharp knife. Eat the kernels hot with dabs of melting butter and loads of salt and pepper or stuff them into generously buttered bread rolls; the warmth of the kernels melts the butter. Gorgeous. Bacon and avocado make it even better.

Yep, I better stop – this is turning into a love story to corn. I’ve got to get out more often obviously!

Sweet Corn Quiche
A quiche worth making Read more
Sweet Corn & Avocado Salad
A spectacular tumble of corn and avocado ... just thinking about it makes me go want to eat it all over again. Read more
Corn with Paprika & Tarragon
Corn doused with lemon-infused oil and imbued with a hint of smoke is downright delicious. Get on to it! Read more