Only read this if you really want to know how to cook eggplant.

And pour yourself a cup of coffee, or a glass of wine, and settle in, ‘cause this is a bit of a marathon.

Eggplants. Mmm, now, here’s a thing, I’ve written more about them than practically any other vegetable – well, perhaps not quite as much as I have about potatoes, because I’m a big fat potato addict, and probably not as much as I have on tomatoes ‘cause I eat them nearly every day – but with eggplants, we go back a long way and I have a deep affection for them, as much as one can have a deep affection for a vegetable. My father grew them, well, actually, it was his father (my grandfather). Big deal, you might think, so did yours, or your neighbour. Right. But this was way back when, a time in New Zealand when you couldn’t even buy a red pepper (capsicum/bell pepper) because no one grew them, because no one knew what they were (apart from the Dallies a.k.a. Dalmatians). So my father grew eggplants, not that successfully, he told me, before I was even born, and I’m not going to tell you how long ago that was! What I will tell you is that this was in Dunedin, where winters were, in his own words, ‘chilly’– by today’s standards, that means freezing – and summers were often not that much better. And therein lies the problem.

Eggplants need warm soil. If you plant seedlings out too early the roots will frizzle up with shock. True! If they get off to a good start with their roots tucked into a cosy bed, they’ll thrive in the light-filled days and moderate nights of mid summer and early autumn. More growing tips here LINK

I have no idea what bought about this ‘growing eggplants in Dunedin’ bizzo with the oldies (ooiii, okay, Ilaria, the ultra-oldies!) because it’s not as if they were pioneers, or from Europe. They were bloody Irish!

Anyway, during hippiedom (the 70s!) eggplants were readily available in ethnic shops in Auckland and they started turning up on menus in cheap-eat establishments, often badly cooked, usually half raw and astringent, and, if you’ll pardon the analogy, they made your tongue feel fat and furry, as if you’d just licked a strip of carpet! God. Banish the thought. If they weren’t like that, they were dry with tough leathery skin, or bitter as hell, and often inedible. No wonder so many people hated them, and served like that, so did I. But I was strangely drawn to them, I think for their beauty.

My epiphany came in Italy. I went straight to the source, to the bossom of a Siciliana mamma, my mother-in-law to be, Mamma Rosa. Why wouldn’t you? Oh my god do the Sicilians know how to cook eggplant! Mamma Rosa’s caponata cannot be beat, her eggplant lasagne was a triumph and her eggplant impanata (sliced, crumbed and fried) was glorious, just glorious, crunchy, salty, creamy in the middle … At the heart of all her dishes was a frying pan(skillet): battered, blackened, having done duty for dozens of years by the time I came along, and trustworthy, like a good friend. She’d fry sliced or cubed eggplants in a shimmering bath of hotter than hot olive oil. Who said you can’t get olive oil hot enough to fry before it breaks down? What a load of tosh and nonsense we’re fed by PR companies in their bid to flog off competing products. I feel a rant coming on … Olive oil is one of only two culinary oils that can be consumed the minute it flows from the oil press, natural, unadulterated, just squashed olives, smelling curiously of crushed tomato leaf crushed with green olives, does not need cleaning, filtering or processing (avocado oil is the other oil that does not to be treated before consuming). It’s a life-giver, seriously, an amazing food. Mamma Rosa would fry slices of eggplant in copious amounts of it and they’d emerge deep, deep brown, never black, and the minute they were removed from the oil, she’d give them a shake – her whole torso shook, too, you know, jiggling boobs, arm flaps going for it – so I’m not sure if that was part of the magic, but anyway, she’d shake off clinging oil, throw the golden hissing things onto crumpled brown paper (heavy-duty brown paper that came wrapped around the daily bread), and shower them with salt, and then there they were, ready to eat, crisp, oily, salty, on top of pasta, stuffed into bread rolls, or just devoured then and there. Sometimes they were put aside to use in a handful of her signature dishes, but then again, half of what was cooked went into longing mouths. Fabulous. Fabulous. Fabulous.

But you may have missed the key word here: copious. In my experience cooks are scared to use too much oil when cooking eggplants because they see them suck it up like a thirsty sponge and then convince themselves that the more oil they add, the more oil the eggplant will suck up. It’s partly true – if you keep topping up the pan with cold oil, the eggplant will continue to suck it up – but the whole process is fundamentally flawed. Eggplant likes to be cooked in PLENTY of oil, and really nice HOT oil, then the eggplant repels it, quickly builds a browned outside, heats up in the middle, puffs up repelling even more oil, and sizzles along beautifully, turning meltingly creamy on the inside. Just watch it happen. That’s just the way it should be. You do it, just dare, fill a wok with a humungous amount of oil, as if you are going to deep-fry samosas or something, about a third-filled, and get it hot. Really hot. (Yes, a wok because the oil can’t spread out over such a great surface as it does in a pan, the wok confines it and it stays hotter. You can only fry a few slices of eggplant at a time in a wok, but what you lose in time to cook in batches, you make up for in speedy frying.) Take the usual precautions, like banishing kids from the kitchen and tying up the dog, and if cooking over gas, make sure there’s no breeze coming in from a window and likely to fan the gas flame. And have something large, like a baking tray/sheet at hand so if you misjudge the temperature of the oil, and it ignites, you can quickly cover the top of the wok with the metal baking tray/sheet and so extinguish the flames. This may sound scary, but it’s not, it’s common sense; move something that is flaming and you feed the fire. Get caught unawares and you’ll panic. Right. You know all this now, if you didn’t already. You’re up for the challenge. Measure your oil before you start, then measure the leftover oil when it is cool. You will be surprised how little of it has been used. That’s healthier. That’s economical, as well, as the oil can be reused for other frying jobs. And the result will be rounds or cubes of eggplant with a finger tuk-tuk-tuk crisp-edged skin, a glowing golden brown exterior outside and that gorgeously creamy inside, which is what I have been banging on about. Yeah. 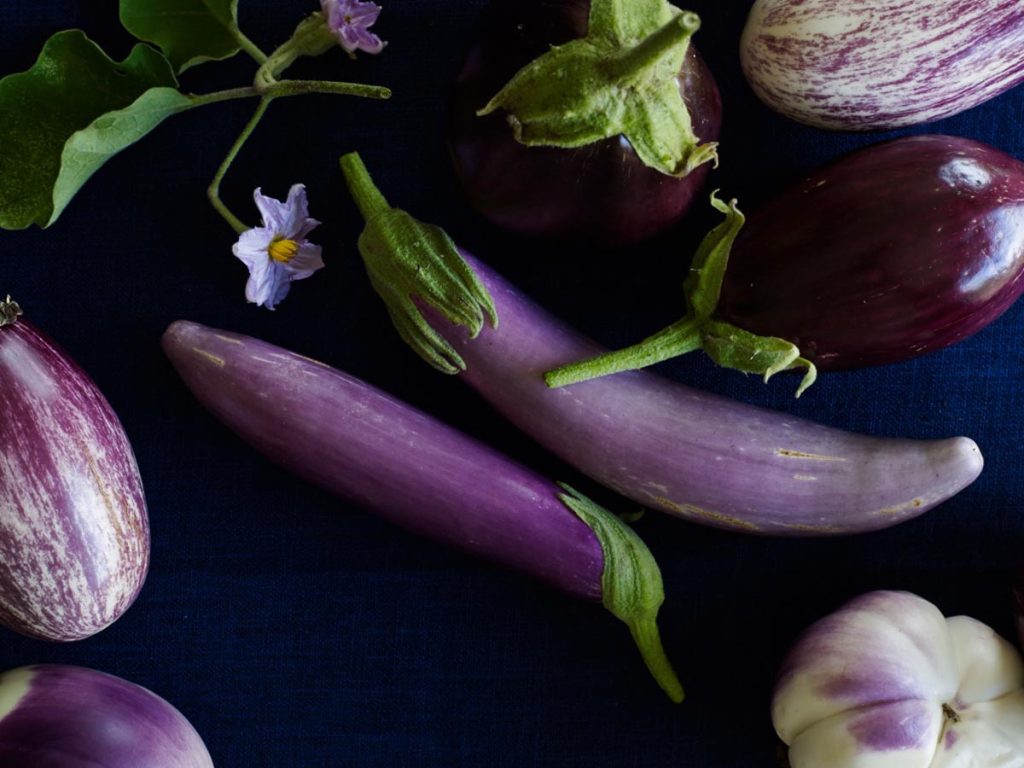 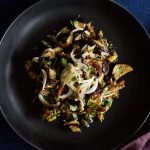 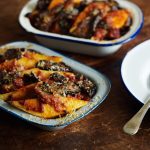 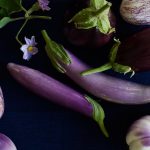 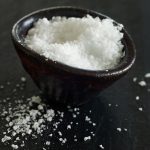 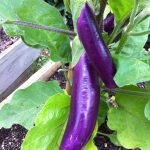 Eggplant & Date Salad
I love this freshly tossed, when everything's all perky and standing to attention, the onion crunchy, the lemon biting fresh and the chilli gnawing the back of you throat ... Read more
Polenta Pie with Eggplant
Holey Moley, this is just the thing for a freeze-ball night. And it feeds a crowd, and reasonably cheaply, too. BUT there are a few steps to it and it's not the sort of thing to try and whip up at 6.00pm. Read more
Caponata with Burrata
Little pouches of love. Read more