Turmeric, the fleshy rhizome (stem) of a plant in the ginger family, is easily detected in dishes because of its pronounced yellow colour. In India it is used in practically every meal, although less so in green vegetable dishes as it is said to discolour greens. Personally, I don’t mind vegetables like green beans when they they loose their brightness and ooze a little turmeric-coloured oil. Nice.

Turmeric – and I’ll talk about ground turmeric first because that is the most common form – has a particularly pungent and earthy aroma, like heavy clay soil baking in the sun mixed with freshly dug earth. It is dry in the mouth, tastes earthy, and has bitter notes. When mixed with other spices it draws out flavours and becomes muted. It’s antibacterial properties make it a very useful preservative and it’s used generously in pickles and chutneys. 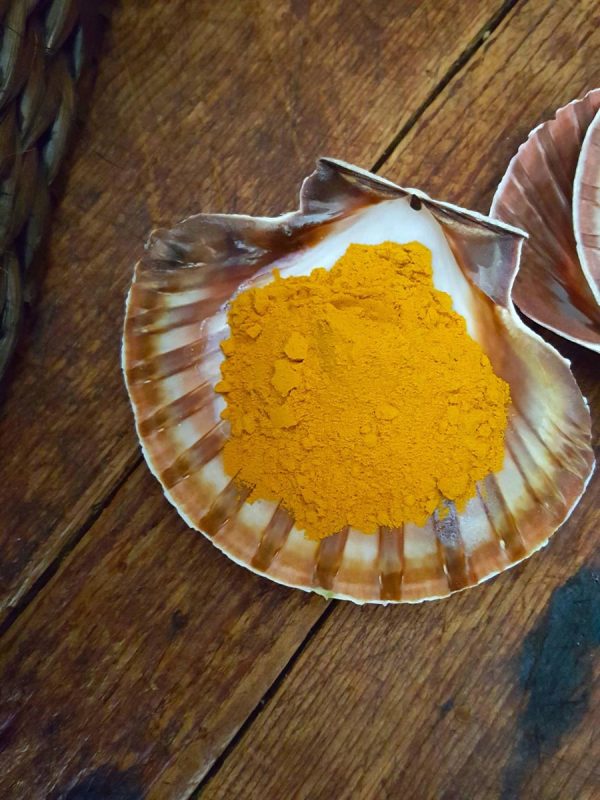 Turmeric is being touted as quite the miracle ingredient! That’s because it contains curcumin, a strong antioxidant. Turmeric is useful as an anti-fungal treatment, it has antiseptic properties, clears sinuses, and is a good digestive aid. Ongoing tests are being carried out in order to fully understand its role in aiding depression, preventing liver damage, preventing and reducing the affects of alzheimers, and in stalling the march of certain cancers, but by far its most significant role is as a powerful anti-inflammatory (inflammation is well documented as being the root of most diseases).

There is some dispute about whether the full benefits of turmeric are available in the powdered form (the processed form of turmeric), or whether you would need to eat it in every meal to gain benefits. Pharmaceutical companies would like us to have doubts and to opt for their products, but let’s wait and see on that. (Indians do eat it in practically every meal, and have a considerably lower rate of many modern diseases compared to disease rates in the western world). It does seem generally accepted that eating turmeric with black pepper aids the absorption of curcumin, so perhaps start with that, adding black pepper whenever you use turmeric in cooking.

Fresh turmeric, available in New Zealand and many other countries, has more punch and fragrance than powdered turmeric, with a citrus note and hints of pepper and ginger. It is not as earthy smelling, nor as bitter-tasting as powdered turmeric. It’ll keep refrigerated for about 2 weeks. Scrub or peel before using, then slice, cut into julienne, grate or pound, or make into a paste. 1 tablespoon freshly grated turmeric is equivalent to 1 teaspoon of powdered turmeric. Watch out because it stains hands and your bench!

How to use it? Add it to a cabbage and carrot slaw, or a spicy carrot soup. Add it to smoothies, vegetable health drinks, rice dishes, tomato-based curries and the like. And if you like hot milk drinks before bed, it apparently induces a fabulous slumber. 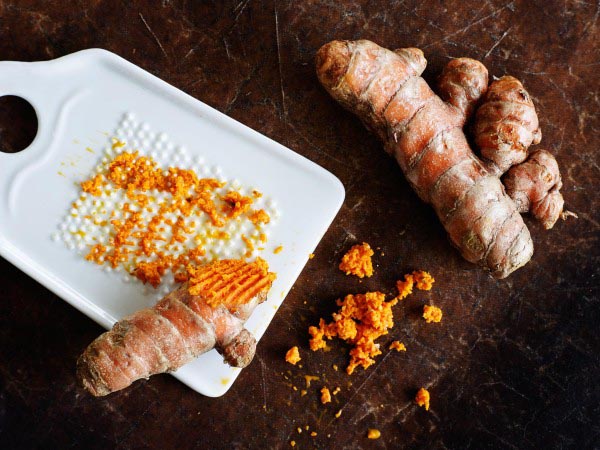 Fresh Eggplant Chutney
Get into it, it's calling to you! Read more
Almond Milk with Turmeric – What a tonic!
There are plenty of reasons to try this drink (no, not just because it's yellow!) ... Read more
Spicy Fish with Curry Leaves
Rev up your midweek meals with a spicy fish curry. Read more