Bacon is simply pork which has been preserved (cured) in dry salt, or a salt solution or brine. Sugars or syrups are sometimes added to the cure. After curing the bacon is sold as unsmoked bacon (also known as green bacon), or it can be smoked where it takes on various flavours from the wood or smoking process used. Traditionally, the skin, called the rind, is left on, but rindless bacon is becoming more popular.

A side of bacon (half a pig) provides different cuts of bacon, coming from the shoulder, belly or back. Sliced bacon is usually taken from the middle and belly while the meaty legs provide joints and steaks, or are turned into hams.

Shoulder bacon, the cheapest, can be sliced into rashers, or chopped to use in pies and quiches or other dishes calling for chopped bacon, or it can be cut into joints for boiling. At its best it is a good meaty cut, at its worst it is pumped full of water and impossible to fry properly.

Middle bacon is the premium cut, taken from the loin (called the eye of the loin) with a strip of belly meat (called the tail). It’s the most popular breakfast bacon. 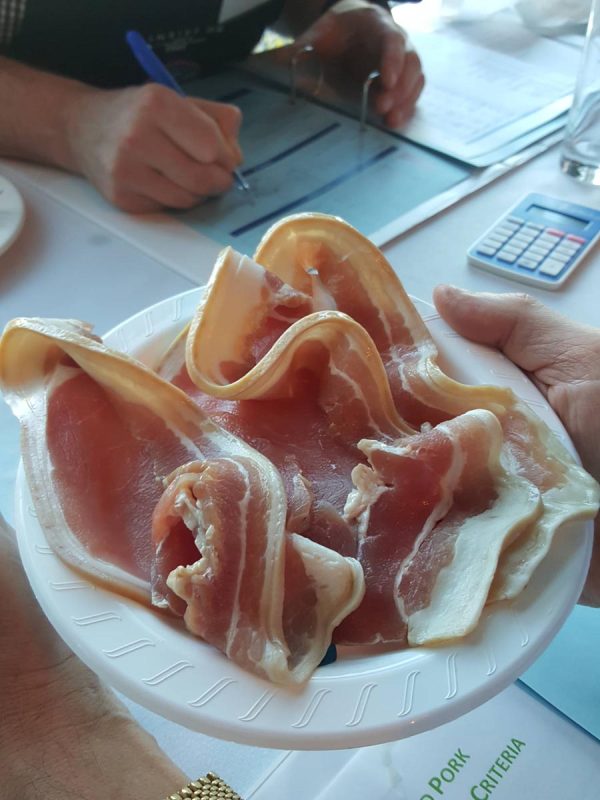 Streaky bacon is taken from the belly of the pig and produces stretchy slices which are useful to line terrines or to wrap around the likes of asparagus or prunes before barbecuing or grilling. It crisps well in the pan or under the grill and has a sweeter flavour than the other cuts.

Bacon hocks and bones are used for stocks and soups, providing flavour.

English recipes often call for gammon. This refers to cuts taken from the upper part of the hind leg, just like a leg of ham, which are cured and smoked like bacon (ham is cured, usually smoked, and cooked). The gammon is cut into small joints, or rolled into joints, and these are excellent braised, ‘boiled’ or baked. The joints can also be cut into steaks or thick rashers. Some butchers sell these cuts as pickled pork.

Bacon taken from the middle of the loin or from cuts from the back of the pig is often called back bacon (in America, it’s known as Canadian bacon). The cuts are leaner and meatier than those taken from the belly and are sold smoked or unsmoked.

Pancetta is the Italian name for bacon, taken from the belly. It is salt cured and may be sold as is, in the slab or sliced, or it may be spiced with cloves and pepper and rolled up, and again sold sliced or in the slab. Both types of bacon are air dried, but not usually smoked (although you can buy smoked pancetta). Pancetta generally has a stronger flavour than our regular bacon. When fresh, it can be served thinly sliced (uncooked) like prosciutto, as an antipasto item. If not available, use dry-cured streaky bacon. 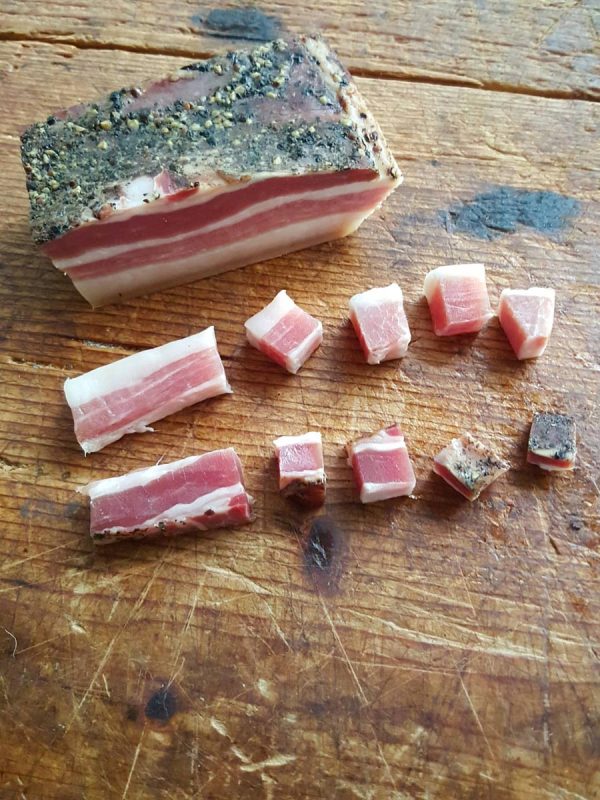 Store bacon in its packaging until ready to use, but once a packet is opened, transfer any unused bacon to a clean container, refrigerate and use within 5 days.

If buying vacuum-packed bacon check that it is not swimming in liquid or overly moist – it will not fry well. Look for dry bacon with creamy fat and rosy meat.

Pork Belly with Aromatics
The smell as this cooks will make you drop to your knees. It is hunger-inducing! Read more
Winter Cooking Class Special running through July!
Get your skates on and set a date to come to Waiheke for our Winter White Cooking Class Special. Read more
Saturday Soup
Saturday soup or any day soup, it fills you up and warms you down to your toes. Read more