I’ve just spent an entire day the old school way pondering reference books trying to define the difference between marjoram and oregano in an effort to work out which oreganos are good for culinary use and those which are not. It’s not straightforward! Rather than try and untangle a web that has seen names change – marjoram originally had its own plant genus but now comes under the genus origanum – and with descriptions varying from country to country (the use of ‘wild’ is really confusing, and names like ‘pizza oregano’ is just silly), and the affects climate and soil conditions have on plants, I thought it better to state what I do know through my own trial and error and my own taste buds, rather than adding to the confusion. One thing everyone does agree on is that oregano and marjoram are all members of the mint family (Lamiaceae), however, they prefer drier growing conditions to common mint.

If you want to grow marjoram to use in cooking, buy Sweet Marjoram ‘origanum majorana’, a deliciously sweet, warming and spicy herb more often used fresh than dried. Read about it here.

‘Oregano’ (origanum vulgare), the green leafy plant you buy from the garden centre, makes great ground cover, fills in gaps in rock gardens and is reasonably hardy, but it’s got as much potency as grass clippings. Look for ‘origanum vulgare’ (hirtum), or Greek oregano (rigani). The test? Crush a few leaves. Garden oregano will not smell of much and if you put a little of the crushed leaf on your tongue not much will happen (you should only do this if you are buying organically grown herbs). So what’s the point of adding that to food? But crush some rigani leaves and the smell will be pervasive. Put a little on the tip of your tongue and fireworks will start in 10-15 seconds: It’ll bite like crushed black pepper! It’s amazingly powerful. Although fresh is usually considered best, when it comes to oregano, dried is better as it becomes more potent. 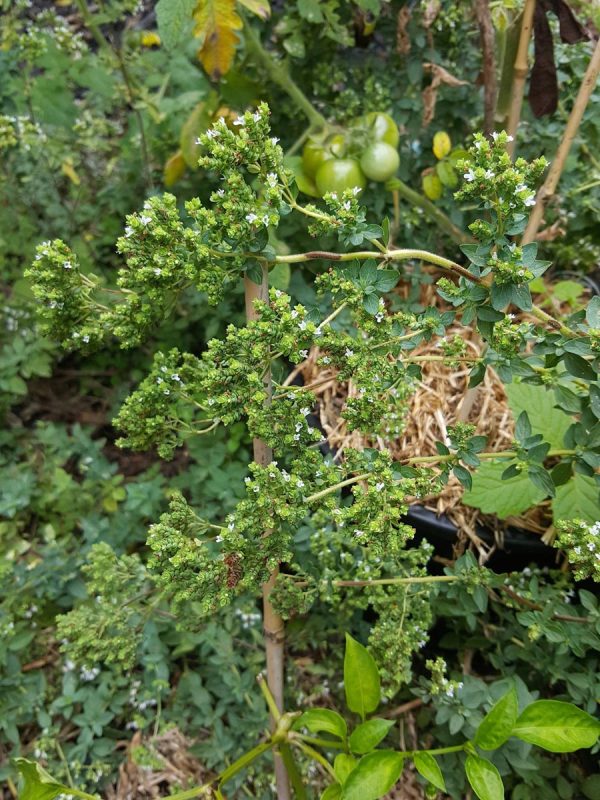 Oregano happily grows in a mixed bed of herbs or vegetables

It’s easy to grow – at least I find it so in Auckland. You can pick the leaves while the plant is growing but they won’t have much flavour, and if you pick the leaves just before the plant flowers, they can be bitter. Wait until the plant flowers. It will send up long stems with flower heads. The long stems adorned with tiny white flowers are a joy to see! (Actually, the name oregano is believed to originate from Greek for ‘joy of the mountain’.) You can use the oregano at this stage, but it will be even better if it is dried. The ideal picking time is before the flowers start to dry on the plant. Choose a dry day – and if the flowers are not quite ready to pick but heavy rain is predicted, pick them anyway because rain will destroy them. Snap or cut off the long stems and tie a bunch of them together. Then hang them somewhere dry out of direct sunlight. As the oregano dries, it will start to drop leaves, so either have a bowl below to catch falling pieces, or tie a paper bag around the oregano (the oregano will continue to dry in the bag; don’t use a plastic bag). Drying oregano will preserve the volatile essential oils, making it more potent than when it is fresh, and drying it on the stem will help it retain its flavour for longer. Once it is dry store it in a cellophane bag, or in a tall jar. It doesn’t need to be airtight, just kept dry and dust-free. To use dried oregano, pinch off what you need (or use the collected died bits in the bottom of the bag or jar) and rub between the palms of your hands to release fragrance and flavour. And don’t reserve it for sprinkling over pizza. Dried oregano is excellent in meat dishes including roasts, meatballs, and slow-cooked dishes, and in marinades, dry rubs and barbecue cuts. Try it sprinkled over sliced summer tomatoes (my Sicilian mother-in-law’s favourite way – just add oil and salt). 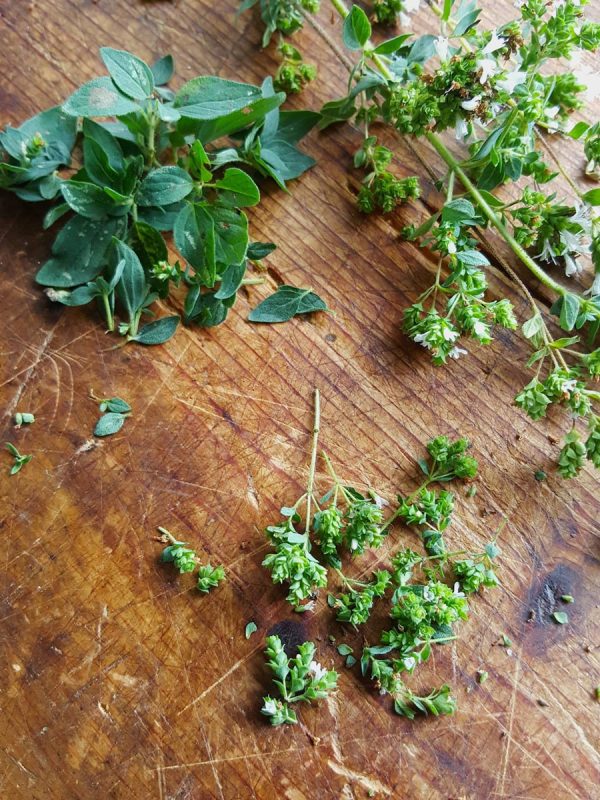 Spatchcock Chicken – Chicken squashed flat!
What’s essential for a dish like this is starting with a superior chicken that has pecked around the grass and had a good time on this earth. Read more
Oregano update
Bring bees into your garden and let the plant flower before harvesting. Read more
Useful to know – green beans
Beware of out of season beans sold in tinted plastic bags – it’s a scam to enhance their green colour. Read more