If you are a fan of scallops, now is the time to indulge.

Scallops at their best are fresh and plump, smelling of the sea, and they should have a glisten to them, a translucency to the white meat, and not look dry in any way. Fresh scallops should be as tender as butter to eat. But overcook them and you may as well play squash with them! 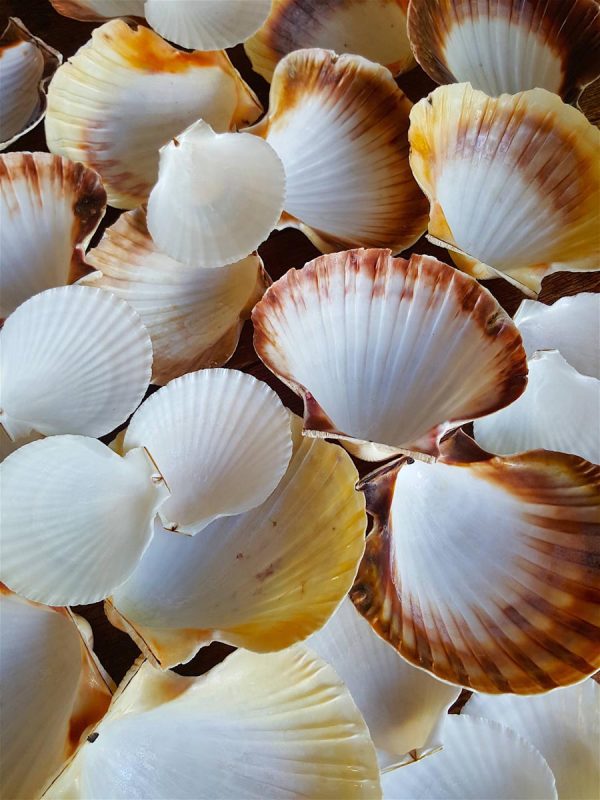 Use them as soon after purchase as you can because the best scallop is a fresh scallop. Remove any black or brown threads and any dark edges on the coral with a small sharp knife. Rinse and drain. If preparing them ahead, keep the scallops in a glass or china container, refrigerated, until ready to cook.

The Americans, and to a certain degree restaurant chefs in Australia, prefer to cut the coral off the scallops before cooking (the orange part, which is the rose), and don’t serve it. We leave it intact, but its texture is quite different to that of the white meat, so don’t let it dry out in a hot pan or on a barbecue hot plate as it will toughen.

Scallops are good with citrus – lemon, lime and orange all work – as the contrast gives them fresh pep. The salty smokiness of bacon is another great accompaniment, either cooked in a simple sauce to accompany, fried and used as a garnish for cooked scallops, or wrapped around them before spearing them with skewers and pan-frying or barbecuing. Scallops are also good with garlic, fennel, leeks, shallots, spring onions, ginger, peppers, tomatoes, artichokes, asparagus, kaffir lime leaves, chilli, smoked paprika, white wine, vermouth, Champagne, pernod, fish stock, butter, extra virgin olive oil, sesame oil, lemon or mandarin-infused oils, butter, cream, chives, basil, parsley, coriander, and other shellfish and many other things. The trick is to make a contrast, as with a squirt of lemon or splash of vermouth or infused oil, or to build layers of flavour, as can be done with shallots, garlic, tomatoes and wine, or to make a textural contrast say with velvety cream or crisp asparagus.

They can be simmered or steamed, deep-fried or seared, and can be imbued with other flavours, or simply left unadulterated to taste just of themselves. Water is the enemy when trying to sear, fry or sizzle. A ridged frying pan is the best choice for searing because any moisture can escape between the ridges preventing the scallops from stewing. The best idea is to oil the scallops, not the pan, and to add the scallops to the pan once it is nice and hot (or toss them in melted butter). That way the oil doesn’t burn as it heats but the scallops will each have enough oil to prevent them from drying out.

Use olive oil, extra virgin olive oil, or an oil of your choice, and flavour it with spices such as cracked coriander seeds, smoked paprika (just a dash), lemon peel, or garlic. Or add a splash of sesame oil towards the end of cooking.

Don’t dump the scallops into the pan in a mass, add them individually and keep each separate from the other, to avoid lowering the pan temperature or creating steam. Cook for no more than 2-3 minutes in total.

While scallops respond to quick searing, no more than 3-5 minutes all up, and are delicious when they develop a slightly sticky exterior with a hint of charring, they are also superb when poached. Poaching is not boiling; it’s not even simmering. The water should merely tremble, with an occasional bubble bursting through the surface of the water – just like a shiver up your spine – nothing more racy than that or you’ll have rubber balls.

What to look for when choosing scallops ..

Beware of giant scallops. I have been caught out once buying gorgeously plump scallops in Australia, only to find the reason the scallops were so plump was because the fishmonger had soaked them in water to plump them up, and hoodwinked his customers into thinking we were buying the lushest plumpest scallops on earth. They stewed in the pan and had a texture of flabby sponge.

The scallop has a patron saint. Saint James wore the shell as his personal emblem, which later became a badge for pilgrims who visited his shrine in the Middle Ages. This is why a popular scallop dish is called Coquille Saint-Jacques.

The scallop shell, found all around the Galician coast, holds mythological importance to pilgrims. It’s also useful as a container to scoop water and hold food. Collect your own shells, scrub well, boil, then lightly oil before use. 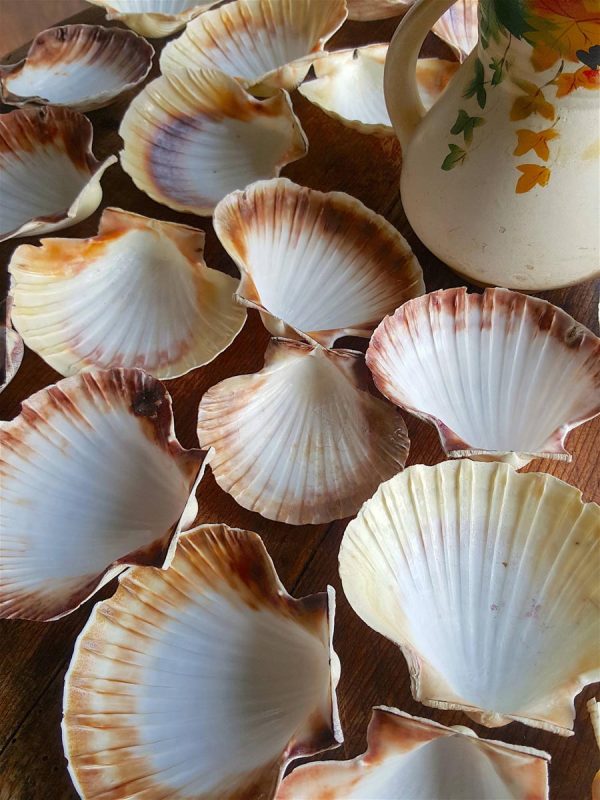 Amaretti – almond cookies with crunch
Crunchy crumbs – just the thing to top fruit or sprinkle in a trifle! Read more
Sad news – Ringawera closed
Read more
Vegetable & Barley Soup
Take it to work, have a mug of it after school, or make a meal of it. Read more